Based on research from a variety of sources, it seems that approximately _____ of variations in personality traits are caused by environmental influences.
[one-half]
____ studies how much of an individual’s personality is inherited
[behavioral genetics]
Hofstede found that the United States is low in
[power distance]
Studies have shown the the Big Five personality factors have ___ % heritability across several cultures
[50 percent]
John’s boss yells at him. As John walks meekly out of the boss’s office, Dana walks past him and says, “Hello!” John yells at Dana and proceeds to berate her for the job she did on the last contract.
Don't use plagiarized sources. Get your custom essay on
“ Chapter 13 MyPsychLab ”
Get custom paper
NEW! smart matching with writer

Freud would say John is using _____ as a way of dealing with his stress.

[displacement]
According to Freud, unresolved conflicts can cause _____ in a certain stage of development.
[fixation]
Early psychoanalysts who broke away from a strict interpretation of psychoanalytic theory were called
[neo-Freudians]
Sarah is shy, so she works hard to look nice all the time in hopes that people will like her.
Get quality help now
Marrie pro writer

[compensation]
According to Freud, the desired outcome of the phallic stage of psychosexual development is
[identification with the same-sex parent]
The office of one of your professors is extremely neat and tidy. All the books are carefully arranged on the shelves, and there are no papers lying about. Freud might suggest that this person has a(n)
[anal retentive personality]
Maslow thought that Einstein and Gandhi were
[self-actualized]
In Roger’s vier, problems arise when
[a person’s view of self is distorted or the ideal self is impossible to attain.
Get to Know The Price Estimate For Your Paper
Topic
Number of pages
Email Invalid email

Dr. Ortiz has a client, Jamal, who is interested in finding out what type of career might be best suited for him. Which one of the following assessments might Dr. Ortiz choose to administer to Jamal based on his current interest?
[Myers-Briggs Typer Indicator]
Devon is taking a personality test that includes a long list of questions. For each question, Devon must choose from a limited set [of answers. Devon is taking a]
Marjorie took a personality test in April. She took the same test in June and got a very similar score. This personality test is
[reliable]
A trait theorist would most likely use which of the following personality assessments?
[California Psychological Inventory]
When psychological professionals conduct personality assessments, they
[often look at the client’s behavior from all four perspectives to find the pieces of each that work for the client.]
If a test measures what it is supposed to measure, that test has
[validity]
According to Cattell’s 16PF self-report inventory, airline pilots, when compared to writers, tend to be more
[conscientious]
Trait theories differ from other theories of personality development in that they
[are less concerned with how personality develops than they are with describing personalities and the actions that result from them.]
In examining the five-factor model (or the Big Five), Costa and McCrae believed that these traits are not _____. In other words, knowing someone’s score on one trait would not give any information about scores on the four other traits.
[interdependent]
One way in which the social cognitive view differs from psychoanalytic theory is that it
[can be and has been tested under scientific conditions]
Sophie has a chance to interview for a promotion at work. She is sure she will do poorly, so she decides against it. Bandura would say that Sophie has
[low self-efficacy]
Albert Bandura’s social cognitive theory is based on
[extensive research, such as the Bobo doll study]
“I believe that humans and animals are conditioned to react to the world around them, thus developing their personalities
[through learned, or habitual, behaviors.” Which type of theorist is most likely to make this statement?]
Patti Saunders
Share 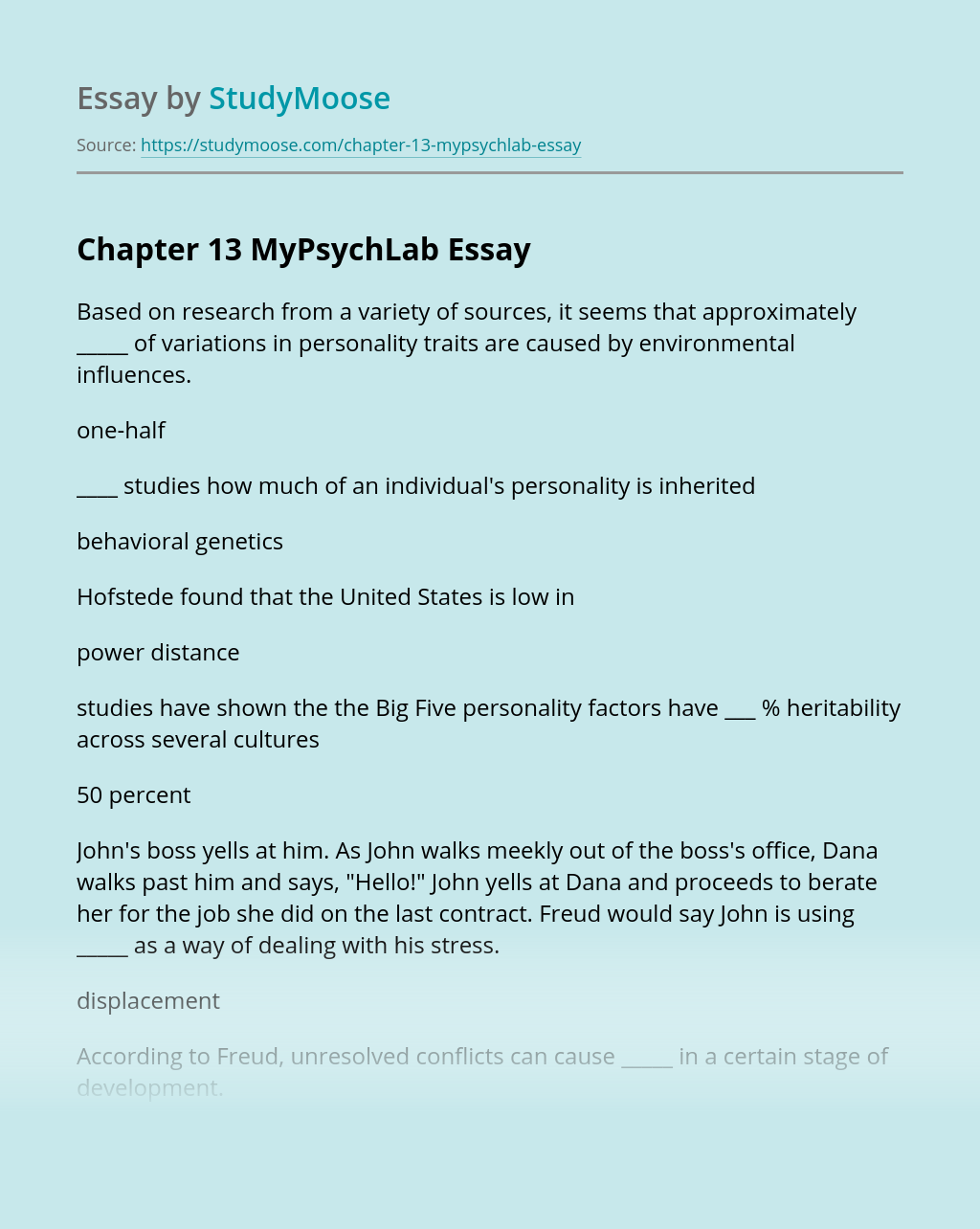