Don't use plagiarized sources.
Get Your Custom Essay on ﻿Chapter 12 QFR Fundamental of Management Just from $13,9/Page

After messages are received it is decoded back into a form that is meaningful for the receiver. 2. What are the similarities and differences of oral and written communication?

Written communication is memos, letters, reports, notes and other circumstances in which the written word is used to transmit meaning. Oral communication or email may be preferred when a message is personal, nonroutine, and brief. Written is best used when it is impersonal, routine and longer.

5. Describe the individual and organizational barriers to effective communication. For each barrier, describe one action that a manager could take to reduce the problems caused by that barrier. Individual barriers are conflicting or inconsistent signals, credibility about the subject, reluctance to communicate, poor listening skills, and predispositions about the subjects.

Chapter 13 QFR
2. What are the stages of group development? Do all teams develop through all the stages discussed in this chapter? Why or why not? How might the management of a mature team differ from the management of teams that are not yet mature? The stages of group development are (1) forming—bringing members together and getting them acquainted; (2) storming—developing group identity, structure and leadership, often through conflicts; (3) norming—accepting and codifying role structures and behavioral norms; and (4) performing—moving beyond group formation to begin accomplishing the group’s purpose.

Groups typically move through all the stages in the order given, and groups that try to “short cut” the group development process will often have unresolved issues that will persistently re-surface. The management of mature teams can focus more on performance than on effective development, which means a focus on tasks, rather than on relationships, structures, and culture. For example, while members of a developing group may want or need to spend time getting to know their fellow members through “ice-breaker” activities, members of mature groups may resent being forced to spend time on such activities. 4. Identify two examples of informal leaders.

Can a person be a formal and an informal leader at the same time? Examples of informal leaders might include such persons as the most experienced secretary in a work group, an intelligent and articulate student who serves as a spokesperson for the class, or a neighbor who organizes social events. Formal leadership is conferred by one’s position within the organization while informal leadership is granted to individuals who are admired and respected by others.

Clearly then, one person can be both a formal and an informal leader. An example would be a tenured professor who has a formal leadership role in his or her department or college and who is admired and respected by students and colleagues, serving as an informal role model. 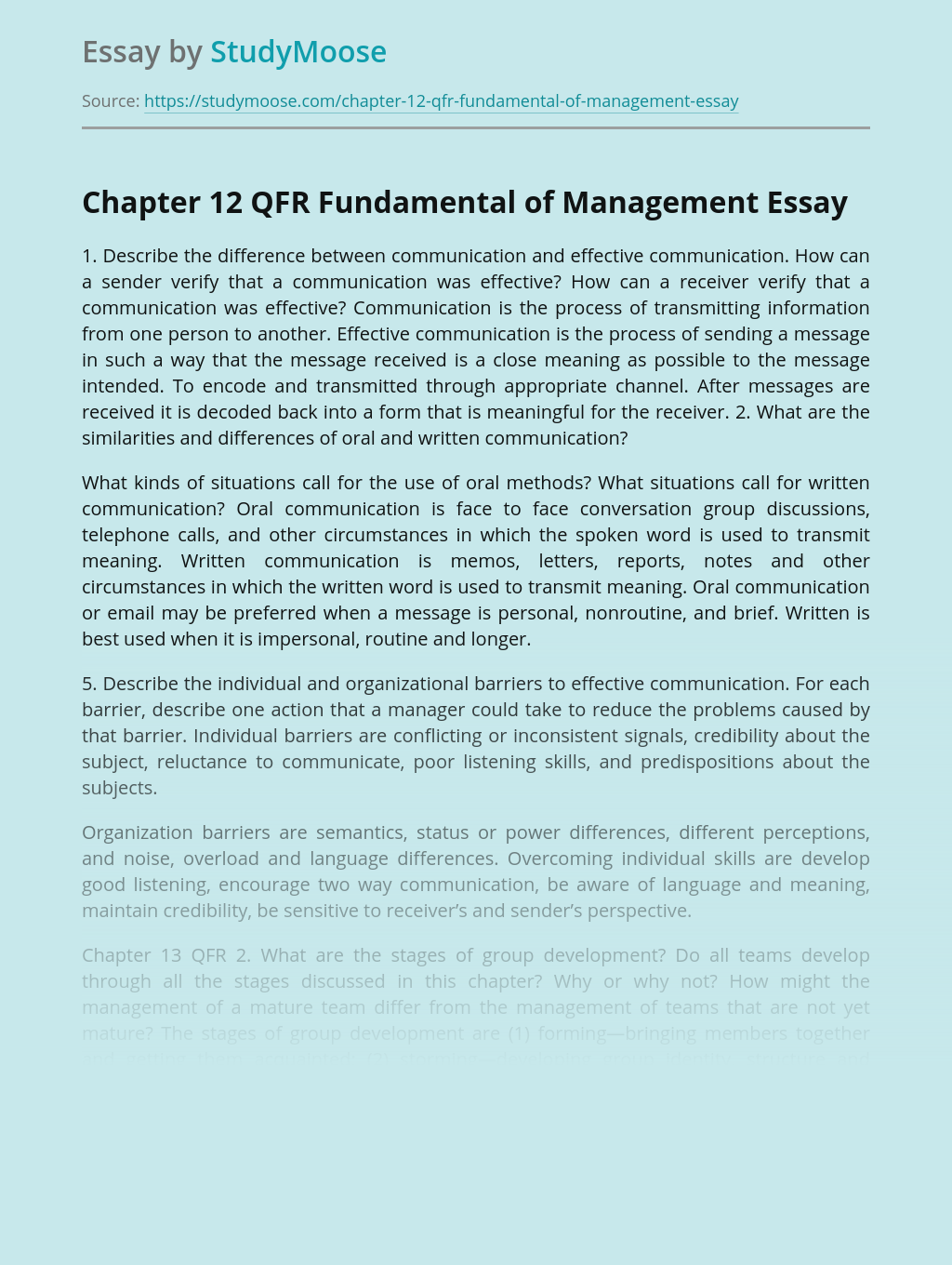 ﻿How to Survive the First Year of College

Rate this post Everyone has a different college experience. The time we spend and relationships we form vary from person to person, but there are some commonalities most freshman experience in their first year in college. What follows are some simple and easy tips and suggestions to help those clueless and frightening incoming freshman survive...

Rate this post Rosa Louise McCauley was born upon February 4, 1913 in Tuskegee, Alabama to happy parents Leona and James McCauley an instructor and carpenter respectively. After her moms and dads’ separation, she went to cope with her grandparents and went to a local school for African American children. Segregation was really common during...

Rate this post As an engineer of a pharmaceutical company, I directly report to my supervisor on a daily basis. I am very diligent with my work and I see to it that I perform at my best. I followed the orders of my supervisor and I work hard to meet deadlines. However, there is...

Rate this post As the article states, Lawrence Joseph Ellison, Larry to numerous, is an embraced child of a Russian emigrate when his unwed mom left him to them. He utilized to be a mediocre in his class. However, with his self-esteem and goals set in mind, he conquered all the discouragements he got from...

Rate this post Abstract A review of the current literature regarding business ethics was conducted analyzing scholarly peer-reviewed articles about business ethics and their relation to leadership, managerial decision making, corporate social responsibility and overall corporate structure. Increased corporate scandals and the discovery of a rise in unethical business practices have thrown the topic of...