Difference Between Leading and Managing

Leading involves recognizing and communicating the need to change course and direction of the project, aligning people to this new direction, and motivating the team to overcome obstacles to achieve the new objectives. Managing is about formulating plans and objectives, designing procedures to achieve those objectives, monitoring progress, and taking corrective action. Managing is about putting out fires and maintaining the course. Leading is about change, and altering the course of a project.

Why is a conductor of an orchestra an appropriate metaphor for being a project manager? What aspects of project managing are not reflected by this metaphor? Can you think of other metaphors that would be appropriate?

There are many parallels between conducting an orchestra and managing a project.

Don't use plagiarized sources. Get your custom essay on
“ Difference Between Leading and Managing ”
Get custom paper
NEW! smart matching with writer

Conductors and project managers integrate the contributions of others. Each is dependent upon the expertise and talents of others. They facilitate performance rather than actually perform. Project managers orchestrate the completion of the project by inducing participants to make the right decision at the right time.

Both control the pace and intensity of work by coordinating the involvement of players. Finally each has a vision of performance that transcends the music score or project plan.

The conductor metaphor works best in describing how a project manager interacts with project members to complete the project. The metaphor fails to capture the intricacies of dealing with all of the project stakeholders (government officials, contractors, top management, customers) that impact the project.

Other metaphors that emerge from class discussions include: quarterback, steering wheel, and ship’s captain.

What does the exchange model of influence suggest you do to build cooperative relationships to complete a project?

According to the exchange model of influence, the primary way to gain cooperation is to provide services and resources to others in exchange for future resources and services (quid pro quo). The key is to find out what you can offer others that is of value to them so that they will feel obligated to reciprocate. Here the notion of influence currencies is useful in identifying different ways to gain cooperation from others. A second key is building a positive “bank account” with those whom you are dependent upon so that they are inclined to cooperate with you.

Why is it important to build a relationship before you need it?

People are likely to be more cooperative if they know you, and you have developed a personal relationship with them. When people view you as pleasant, credible, and helpful based on past contact, they are more likely to be responsive to your requests for help and less confrontational when problems arise. The key is building a positive credit in the relationship that you can tap into when you need help.

Why is it critical to keep the project sponsor informed?

The project sponsor is a powerful ally who uses his/her influence to protect the project when it comes under attack in higher circles of management. Project sponsors need to be kept informed so that they can defend the project to the best of their abilities.

Why is trust a function of both character and competence?

Which of the eight traits/skills associated with being an effective project manager is the most important? The least important? Why?

This question is designed to generate discussion rather than a definitive answer. Most students will pick either emotional intelligence, systems thinker, skillful politician, or personal integrity. Having students debate their choices can lead to a spirited discussion, especially between those who picked skillful politician and personal integrity. The key is to get students to think about how these traits relate to being an effective project manager. For example, personal integrity is important because it leads to trust which facilitates more effective interaction. Alternatively, being a skilled politician is necessary to deal with different stakeholders with conflicting agendas. Students should come to the conclusion that while some traits may be more important than others, all are important to being an effective project manager.

Difference Between Leading and Managing. (2016, Mar 24). Retrieved from https://studymoose.com/chapter-10-review-questions-essay 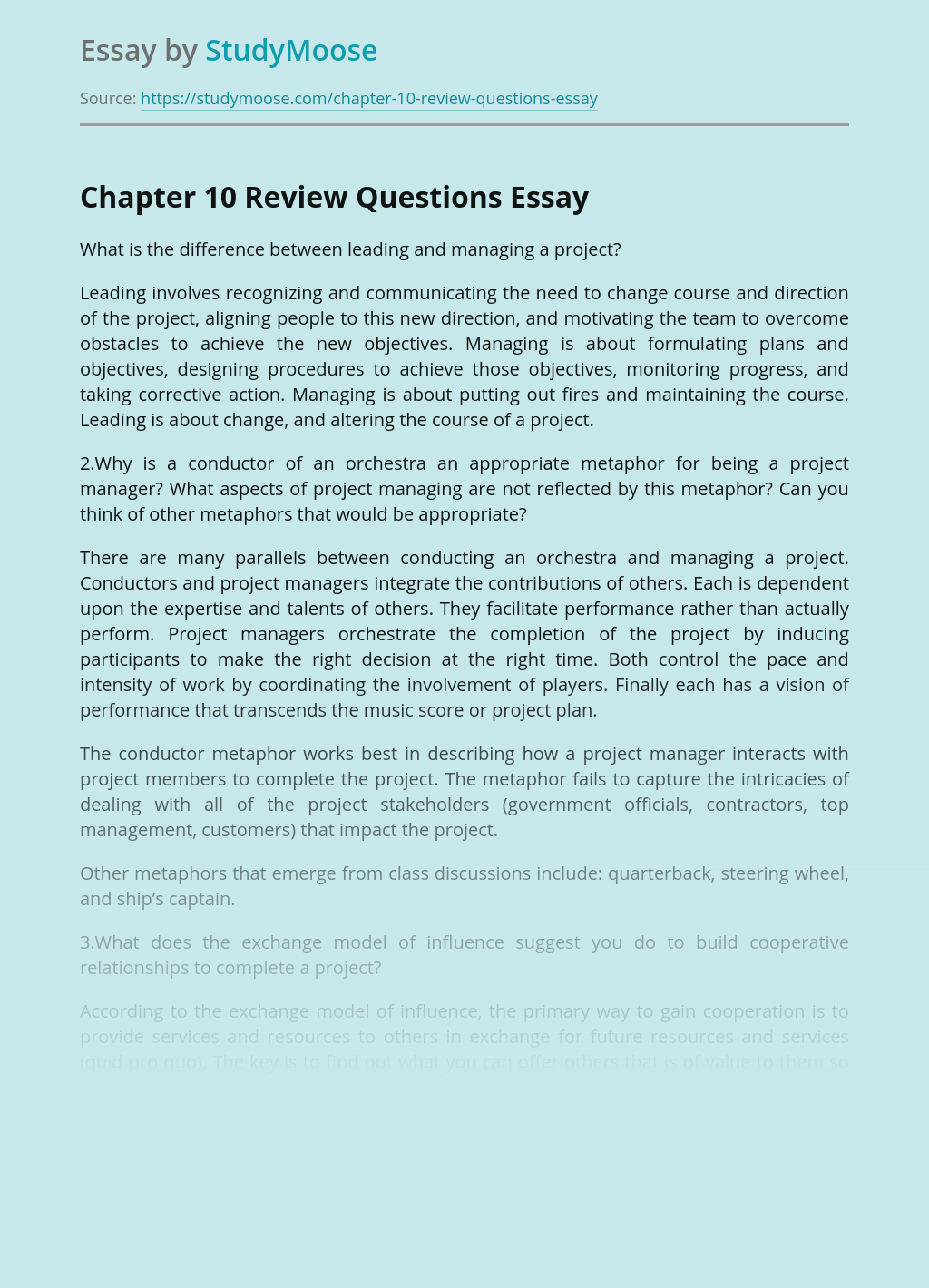