Chapter 1 Carson McCullers and postmodernism is going to

Chapter 1, “Carson McCullers and postmodernism”, is going to introduce the construction of the postmodern canon and McCullers’ connection with postmodern literature. It will begin with a discussion on the definition of postmodernism by exploring its relationship to modernism, existentialism, poststructuralism and postmodern philosophy. Main ideas and theories of the representative postmodern thinkers, like Jacques Derrida, Michel Foucault and Jacques Lacan, will be introduced and will mainly highlight their impact on literary criticism and the guiding principles of people’s life. Postmodernism is generally regarded as the extension of modernism, which reacts against the ideas and values of modernism and deconstructs the modern canon.

Don't use plagiarized sources. Get your custom essay on
“ Chapter 1 Carson McCullers and postmodernism is going to ”
Get custom paper
NEW! smart matching with writer

Therefore, in order to find the postmodern features in McCullers’ work, I will first discuss the elements of modernism in McCullers based on existing literature, followed with the finding on the possibility of McCullers’ being influenced by the rising postmodern movement in the middle to the late 20th century before her death in 1967. I will try to prove with examples from her novels, poems, letters, her unfinished autobiography and biographies by others, that though McCullers was a writer of the late modern period, her thoughts and works are dotted with postmodern sparks.

Based on McCullers’ unfinished autobiography, the biography by Virginia Spenser Carr, Chapter 2, “Carson McCullers’ crises”, will analyse the physical and mental problems the female writer entangled in her short life: her disease, marriage problem, gender problem, etc. Her religious belief, philosophy of love and political attitude will also be discussed here. Then I will proceed to explore how her own crises were reflected in her writings.

For example, McCullers’ emotional attachment to her childhood piano teacher, Mary Tucker, helped give voice to her expression of the “We of Me” in The Member of the Wedding. (Carr 35-6). What’s more, as a writer who had two stormy marriages and special sexual attraction to a number of women, her view on love and sexuality are shown in the descriptions, such as Singer’s homosexual love for Antonapoulos in The Heart is a Lonely Hunter and the triangle love among Miss Amelia, Marvin Macy, Cousin Lymon in The Ballad of the Sad Caf?.

I got the inspiration of writing my third chapter, “External conflicts and internal conflicts: race, class and gender”, from the book Race, Class and Gender: An Anthology co-edited by Margaret L. Andersen and Patricia Hill Collins in 1992. This book is widely recognized for shaping the field of race, class and gender studies as well as its related concept of intersectionality, which guides me to study the overlapping and interrelation among different types of discrimination based on race?class and gender, etc. This chapter is structured around three sections:

Based on an introduction of American racism during the 1930s and 1940s, the first section will discuss McCullers’ passionate interest in US racial issues and her unique way of presenting the suffering and struggle of the black Americans and the Jews in her works. This part is planned to apply postcolonial theory to expose how the minorities in America were robbed of their legal, economic and cultural rights in the history and in what way they are still suffering from the “internal colonization”. For example, in The Heart is a Lonely Hunter, Copeland forbids his black children to wear the “bright-colored, flimsy clothes” and insists that “everything in the house must be plain and dark”. (74-75) His hypercorrect English and rejection of black “exoticism” make him a black with “a white soul”. This indicates the result of colonization of the “other” groups’ mind and their complicity in their own oppression.

The second section targets to explore from postmodern perspectives Carson McCullers’ portrayal of the oppressed classes of the South and her description of the influence of “fascist” ideology and Marxist ideas on the characters. Foucault’s power theory and phenomena of discontinuity will be applied in analyzing the stories. For example, according to Foucault, power is everywhere in every relationship. In The Heart is a Lonely Hunter, five main characters in the novel are like five imprisoned souls in a panopticon, exposed under the control of both normalizing and repressive power, striving for expression and spiritual integration in the modern society. What’s more, Michel Foucault stresses on phenomena of discontinuity and holds that in a transition from one era to the next, there will be overlaps, breaks and discontinuities as society reconfigures the discourse to match the new environment. The Heart is a Lonely Hunter is set in the transitional period from modern age to the postmodern era. Undoubtedly, a kind of discontinuity appears with the progress of society. people struggle on the fault zone caused by the discontinuity which can be the main cause of their “spiritual isolation and loneliness”.

The third section will focus on the relation between men and women in McCullers’ main novels through the lens of gender. At first, it introduces how gender has been defined and refined through the recent history of the feminist movement. Then through the analysis of the characters’ feminine or masculine traits and their gender behaviours, I intend to discuss the author’s view on gender discrimination in the conservative patriarchal American South. At last, I will illustrate some popular methods of solving the gender problem: “Gender and Development” approach, aiming to enable women to participate on an equal basis with men in determining their common future; Marxist perspectives, advocating for the redistribution of wealth and power; ecofeminist perspectives, confronting industrial practices that accompany development. In addition, I argue that in McCullers’ stories, race, class and gender issues are always not separately presented. For instance, Mick, a middle-class white girl with gender confusion, has both class and race superiority over her black domestic Berenice, who suffers from gender, class, and racial biases simultaneously. Therefore, I call attention from the critics to the intersectional discrimination in McCullers’s works based on various factors.

The last chapter of this paper, “Existential crisis and acceptance: sexuality and identity”, is going to focus on McCullers’ queer characters who become involved in crises during their search for identity. First, I want to introduce the relationship between queer theory and Lacanian psychoanalysis. Then, I proceed to discuss the novels (The Heart is a Lonely Hunter, Reflections in a Golden Eye and Ballad of Sad Caf?) through the prism of Lacanian psychoanalysis, aiming at getting an insight into the desire and repression of the “homosexuals” in the stories, as well as drawing people’s attention on their existential crisis. For example, in The Ballad of the Sad Caf?, the love triangle among the three main characters can be convincingly interpreted from the Lacan’s mirror stage perspective. Miss Amelia’s self-formation efforts are made through connecting herself to the alienating image in the mirror, which is Marvin at first then Lymon. However, due to the illusive nature of the image in the mirror, her identity seeking based on such image is tragically a failure in the end. The same fate falls to Marvin and Lymon who also fail to seek their identities in mirrored “others”. At last, after digging into Americans’ attitudes about gays and lesbians during the mid-twentieth Century, I will exam McCullers’ paradoxical attitude towards the acceptance of the homosexuals. McCullers, though suffered from physical illness and mental breakdowns, is a bisexual writer who in her real life expressed her love to both men and women bravely and refused to commit suicide with her bisexual husband. However, she has offered her gay and lesbian characters in stories a negative way to solve their identity problem by accepting reality or hiding sexual orientation, instead of fighting against a heterosexist world, for instance, in Reflections in a Golden Eye, Captain Penderton murders the object if his desire, rather than deal with his latent homosexuality.

Chapter 1 Carson McCullers and postmodernism is going to. (2019, Dec 17). Retrieved from https://studymoose.com/chapter-1-carson-mccullers-and-postmodernism-is-going-to-example-essay 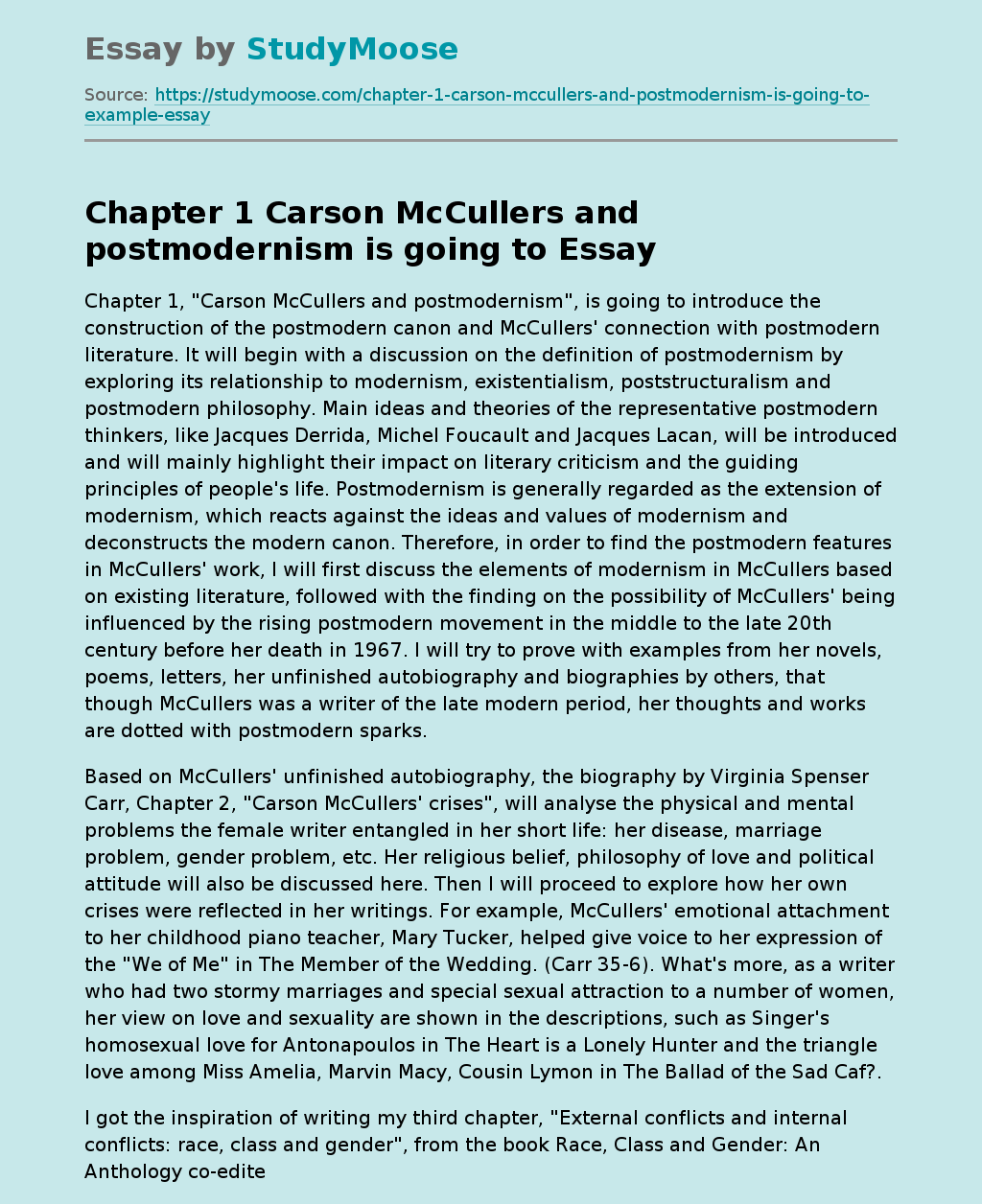