Changes in Medical Practice After the French Revolution

The French Revolution is often lauded as one of the most significant events in European History. It not only overthrew the long established political structure of France but also set into motion radical changes within the field of medicine. These changes mostly took place within Parisian hospitals, which were transformed from prison-like internment centers for undesirables under the French Crown into places dedicated towards patient care and medical study (HISC 115, lecture 5, slide 14). Apart from the function and layout of the hospitals themselves, the doctor-patient relationship and the focus and methodology of medical study also saw change.

Don't use plagiarized sources. Get your custom essay on
“ Changes in Medical Practice After the French Revolution  ”
Get custom paper
NEW! smart matching with writer

Two figures who are greatly representative of these changes in medical practice after the French Revolution are Réné Laennec and Pierre Louis.

Let us begin by elaborating upon the changes that occured within medical practice during and after the French Revolution. Parisian hospitals became centralized, secular institutions run by the state. (HISC 115, lecture 5, slide 17) This meant that the hospitals were now dedicated to the ill and no longer possessed the charitable or punitive functions they once had (HISC 115, lecture 5, slide 17).

Patients were given their own beds and separated into different wards based on their symptoms (HISC 115, lecture 5, slide 17). Although these changes seem beneficial for the patients, relations between patients and physicians changed into a more objective and dehumanizing one. The people who ended up at Parisian hospitals were those who could not afford traditional bedside physicians, and the lack of treatment methods for disease at the time meant that many patients died while in the hospitals (HISC 115, lecture 5, slide 17). The abundance of living patients and cadavers paved the way for a new focus on finding physical evidence of disease rather than listening to patients’ narratives. (HISC 115, lecture 5, slide 25) This shift towards finding physical evidence of disease also added to the dehumanization of the patients by doctors.

Réné Laennec was a French physician most notable for the invention of the stethoscope in 1819. (Porter, 308) According to anecdotes of the invention, the earliest prototype of what would become the stethoscope was simply a rolled up sheet of paper placed onto a female patient’s chest (Laennec, 4). In doing so, Laennec was able to amplify the sound of the patient’s lungs as she breathed (Laennec, 4) Different sounds would be attributed to different symptoms of specific diseases, and diagnosis of disease would become much easier in living patients (Laennec, 27).

Laennec is a good figure to represent many of the changes that took place in revolutionary Parisian medical practice. In his essay on the stethoscope, he emphasizes the importance of utilizing hospitals as a place to observe and study disease (Laennec, 8). Laennec’s mentality of using hospitals for medical research absolutely falls in line with practices at Parisian hospitals at the time. In terms of the changing doctor-patient relationship, Laennec’s stethoscope helped to find objective evidence of illness (HISC 115, lecture 5, slide 25). This new objective evidence then replaced the more subjective patient narrative used in the past, furthering the idea that the patient’s own experience matters less than scientific data (Porter, 309). Réné’s stethoscope also promoted increased physical contact and examination of the patient, whereas more traditional methods merely took a pulse or examined the patient’s urine (HISC 115, lecture 2, slide 20).

Laennec is representative of the new medical focus on finding physical manifestations of disease because his stethoscope was made exactly for that purpose. Prior to the stethoscope, the most reliable way to study a patient’s illness was to perform an autopsy on the patient’s corpse (Porter, 308). By using the stethoscope, Laennec was able to listen to and categorize different sounds the lungs and heart made to determine exactly what disease the patient was suffering from with a reasonable degree of certainty (Laennec, 27). He provides numerous examples of this physical location of disease in his treatise, with examples such as the presence of a “slight and distinct murmur” in the breathing of a healthy person and the inability to “distinguish at any particular point” breathing sounds in the ill (Laennec, 29-33). All in all, Laennec’s invention of the stethoscope helped immensely in shifting the focus of medical research towards the study of finding physical evidence of disease within patients before death.

Pierre Louis was also quite representative of all the changes in medical practice following the French Revolution. A talented and well respected French physician with a well established practice in Odessa, Pierre Louis became disillusioned when he saw the devastation caused by an outbreak of diphtheria (HISC 115, lecture 6, slide 8). Determined to find a mechanistic solution to the problem of the disease, Louis returned to Paris’s hospitals to observe and examine patients (HISC 115, lecture 6, slide 9). He is most notable for his work on the ineffectiveness of bloodletting, which was regarded as a “truth” by most physicians and surgeons even after the advent of revolutionary medicine (HISC 115, lecture 6, slide 11). So dominant was the prevailing trust in bloodletting that Louis remarks about his findings that “it is not without a degree of hesitation that I publish them” (Louis, 1).

Like Laennec, Pierre Louis serves as a great representation of the new doctor-patient relationship in medical practice. Louis was a proponent of the “numerical” method of medical study, which emphasized that careful numerical records were the best way to judge if treatments were effective (Porter, 312). In this process, individual patients were dehumanized and objectified in the sense that they became mere numbers in a data set, compared to the more personal patient narratives found in other works such as Edward Jenner’s (HISC 115, lecture 6, slide 19). Louis was also a proponent of the “universal man,” a theory that claims that all humans are fundamentally alike in biology (HISC 115, lecture 6, slide 13). Such a theory further reduces the unique individual patient into nothing more than just another clinical subject like the others.

Pierre Louis was also quite representative of the changes in the methodology of medical practice during and after the French Revolution, where research itself gravitated towards a more objective form (HISC 115, lecture 5, slide 25). As stated earlier, Louis was a proponent of the numerical method of research, as opposed to something more subjective like Edward Jenner’s more personal case histories of patients. Louis’s methods are representative of a shift towards trying to quantify medical research, which had been more of a qualitative field in the past (HISC 115, lecture 2, slide 20). His numerical methods were attacked by many physicians for being unable to account for individual differences and for being too “inflexible” because of its use of mathematics (Louis, 55-63). Louis defends his methods by stating that his methods are not inflexible when quantifying the same items, and that individual differences often don’t affect the efficacy of treatments (Louis, 55-64). The second defense could be attributed in some degree to Pierre Louis’s belief in the universal human. Because there were no observed differences in the effectiveness of treatments among different individuals, the use of mathematics to quantify patients could be justified because their bodies and illnesses functioned more or less the same way (Louis, 55-64).

All in all, Réné Laennec and Pierre Louis are both greatly representative of the changes in medical practices brought forth by the French Revolution. Even today, a form of Laennec’s stethoscope is still used in the medical field, both in research and in practice. Louis’s objective numerical method is now standard practice for research purposes (HISC 115, lecture 6, slide 19). Be it the stethoscope or the use of the numerical method for clinical research, both individuals’ contributions to the medical study helped shape the modern medical practice we know today.

Changes in Medical Practice After the French Revolution . (2021, Apr 06). Retrieved from https://studymoose.com/changes-in-medical-practice-after-the-french-revolution-essay 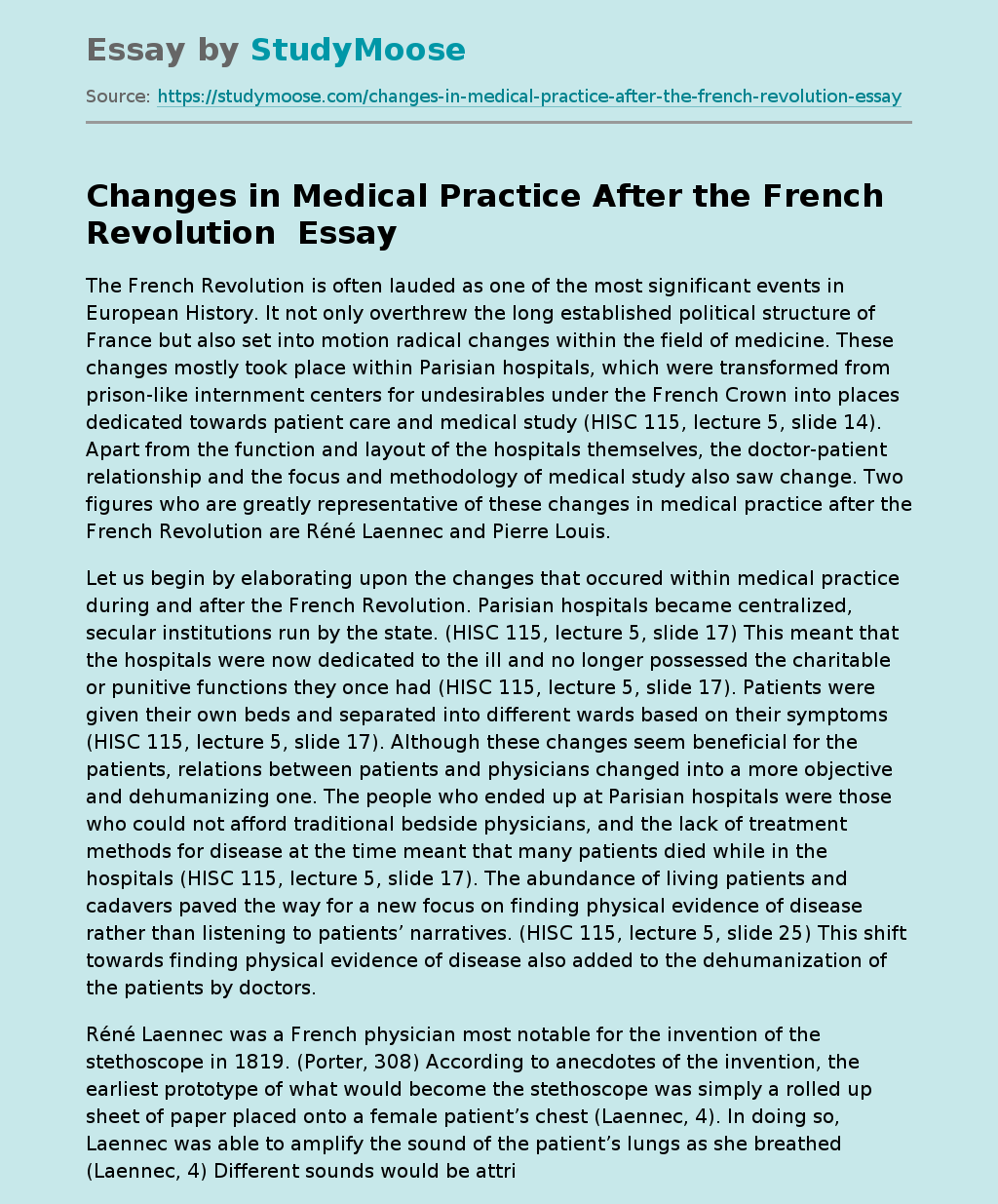