Changes and Continuities of Islam

The period from 600 C.E to 1450 is often referred to as the Post Classical period. There were many developments and reforms that occurred during this period however one of the most important events that happened was the establishment and the spread of Islam. Islam is a very prominent religion in the world for its profound values and principles. During the Post Classical Era, Islam from the Middle East was considered a persistent religion but it also went through many altercations as the society changed over time.

Don't use plagiarized sources. Get your custom essay on
“ Changes and Continuities of Islam ”
Get custom paper
NEW! smart matching with writer

The first major change is that Islam was born and developed over time. Before 600 C.E, Middle East was not such an organized society because its people worshipped several thousand gods as idols and used them for corrupted purposes. However, this man called Mohammad sought to change the society, considering it being so fraudulent. He soon then developed the religion of Islam, missioned by the angel from God, and the first pilgrimage to Kaaba occurred in 632 C.

E. From there the religion of Islam grew popular and spread to many different regions of the world such as North Africa to Spain. By that, it can be known that many people began to worship the religion.

The second change is that as different people start to adopt the religion, powers changed. Even from when Mohammad died, people even split for whom they wanted to give the power to. There were various conflicts in choosing the power. The third major change was in the gender relationships. Even though the Islamic society was highly patriarchal, women enjoyed a more active and stronger voice in society and were allowed to take highly valued roles in government, business, and education as the time passed.

The continuities of Islam in the Middle East were in the aspects of trade, gender relationship, education and tradition. Muslim merchants, pilgrims, and missionaries continued to trade over the Silk Road even though time passed. Trade improved agricultural productions, which eventually resulted in the development of commercial centers. Maritime trade in the Red Sea, Persian Gulf, Arabian Sea, and Indian Ocean also continued but the number of trades increased gradually. Even though the above paragraph illustrate how the women were able to gradually gain power the dominant power of males continued. Though the Quran recognized women as honorable and equal to men, the practice of veiling women created a symbol of male authority in the Islamic community. Education was always one of the most essential aspects of the Muslim society.

Missionaries, mosques, and Islamic educational institutions were established throughout the dar al-Islam. Baghdad continued to flourish as a center of learning and culture. Also, Arabic remained as the language of religion, theology, philosophy and law, while the Persian language dominated literature, poetry, history and political reflection. Talking about language, most of the rituals and tradition carried on. As Muslims made the pilgrimage to Mecca (Hajj) constantly, mosques and inns were continuously established. Over the centuries these pilgrims helped to spread Islamic beliefs and values.

The global aspect of Islam is emphasized since Islam is one of the cultures that spread very widely throughout the world and became one of the most prominent religions in the world. It influenced the cultures of the countries of North Africa such as the famous Mali and Spain. Mali ruler Mansa Musa observed Islamic tradition by making his pilgrimage to Mecca (Hajj) in 1324-1325. He gave out gold all along his journey. Upon his return to Mali, he built mosques, particularly in the trading cities frequented by Muslim merchants. He also sent students to study with distinguished Islamic scholars in North Africa. He had 500 slaves on his trip to Mecca. Like this, Islam basically supplemented traditional religions of Africa and other regions of the world that got affected by the religion. Therefore, the Islam from the Middle East in the Post Classical Era made effort to be a persistent religion but never was afraid of altercations to become a better religion for the people to worship.

Changes and Continuities of Islam. (2016, Jun 12). Retrieved from http://studymoose.com/changes-and-continuities-of-islam-essay 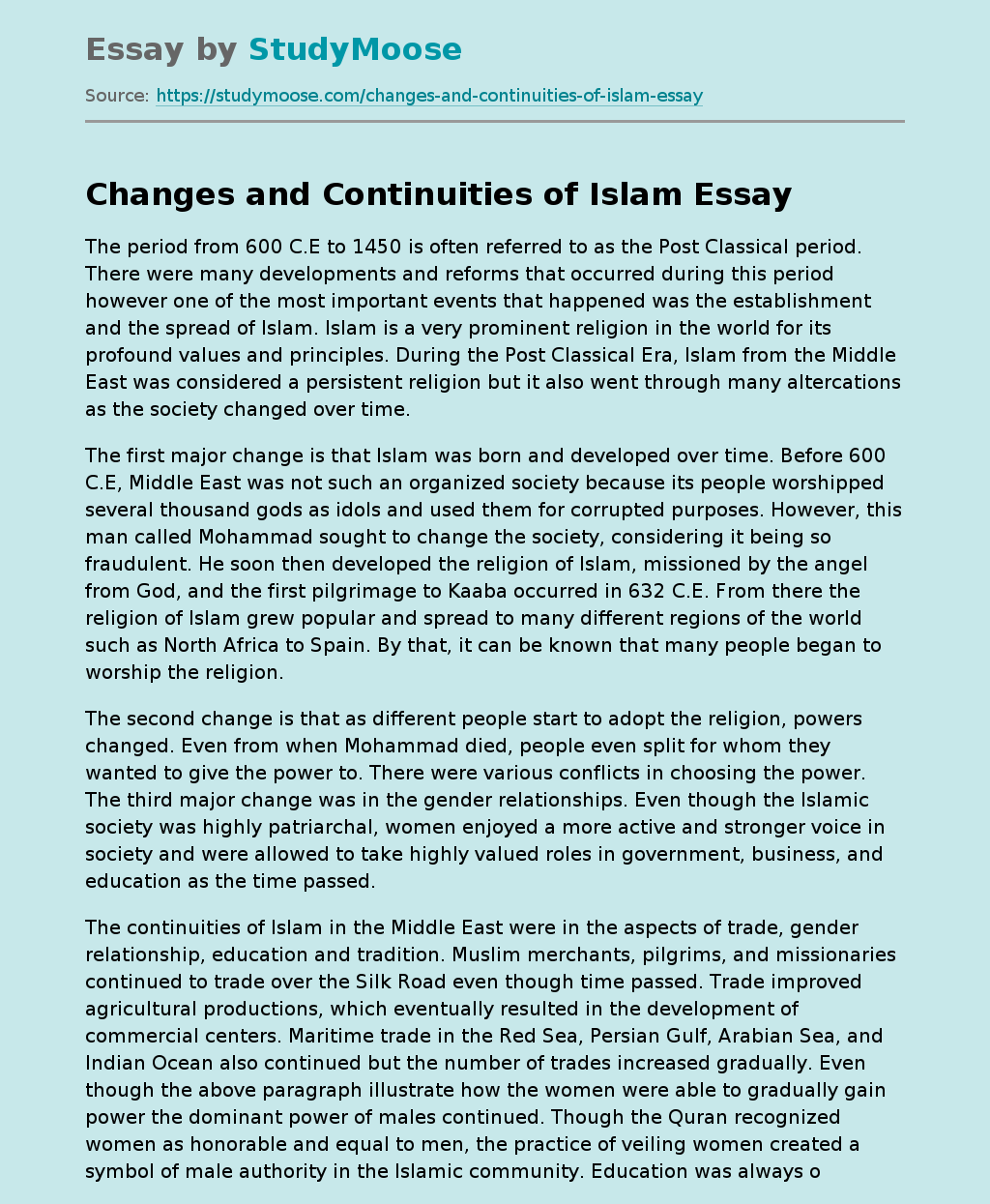