Change: Theme in the Metamorphosis

Turn in your highest-quality paper
Get a qualified writer to help you with
“ Change: Theme in the Metamorphosis ”
Get high-quality paper
NEW! AI matching with writer

This is where the conflict arises because now they have to learn to work for themselves instead of relying on Gregor for income, which is ultimately a great positive change.

The family’s initial reaction towards Gregor is largely extremely negative. When the family and the chief clerk, Gregor’s boss, see him for the first time they panic. Gregor is promptly shoved back into his room and he is locked there. “No one came any longer, and, in addition, the keys were now on the outside” (page 25).

This represents the family’s immediate hostility towards Gregor where as before Gregor’s family had always taken care of him. Gregor’s sister, Grete decided to at least bring Gregor some food but even then she is still frightened. “…She immediately opened the door again and walked in on tiptoe as if she were visiting a seriously ill person or even a stranger” (page 26). Mrs. Samsa asks to see Gregor but Mr. Samsa and Grete stop her.

It shows that at least she has accepted Gregor’s change and wants to see him. Although the family does not react very well towards Gregor’s change his family still trys to help him.

Grete notices that Gregor is learning to move around, this is a positive change. She decided that moving furniture out of Gregor’s room would give him more room to move around, and she asks for her mother’s help. Gregor sees his mother and sister taking away the last traces of his humanity. In a plight of desperation he sticks himself to a picture on the wall. Grete is annoyed and tells him to get off, and when Gregor’s mother catches sight of Gregor she is so frightened she faints. Grete panics because she is worried about her mother, and Gregor follows her to get medicine for their mother.

In the midst of all this chaos Mr. Samsa comes home. A positive change in his appearance is seen. Gregor had seen him as “…the same man who would lie wearily, buried in bed,…who had received him wearing a bathrobe and sitting in an arm chair…”(page 37). Where as now Gregor’s father “…was perfectly erect, dressed in a tight blue uniform” (page 37). Although Mr. Samsa’s appearance and his acquiring a job is a positive change his reaction towards Gregor is negative. Gregor’s father assumed that Gregor had done something violent and he was so furious he threw an apple at Gregor. Mr. Samsa throwing the apple was also a negative change because this was his son he was injuring.

The change in the family’s behavior towards Gregor had become increasingly negative. Gregor’s mother and Grete had obtained jobs, and Gregor saw how tired and overworked the family was becoming. In the beginning Grete took careful time to feed Gregor and clean his room, but as she worked she hastily shoved food into Gregor’s room as she ran off. The bitterness of the family peaked, and Grete even wished for Gregor to die. “And therefore I merely say: we have to try to get rid of it” (page 47). Where previously Gregor had been dying physically he had accepted that he was a burden on the family and he was also dying emotionally. He accepted his face and dies peacefully. When the family finds Gregor dead they are relieved and thankful they don’t have to deal with him anymore. Gregor dying had a positive effect on the family because now they were relieved of the burden that they had been given.

The family learned how to work for themselves, yet in the process they treated Gregor poorly, the first being positive but their treatment of Gregor being negative. If one person changes it become necessary for the people around them to change as well. Often times those changes made can be positive or negative. Gregor’s change greatly affected the family and it became necessary for the family deal with the change. The changes they made were largely negative and not beneficial towards Gregor. The family was unwilling to make positive changes in their behavior towards Gregor which resulted ultimately in his death. This shows that whatever changes people choose to make, either positive or negative, the changes will always have a great effect on everyone around them.

Change: Theme in the Metamorphosis. (2016, Jun 21). Retrieved from https://studymoose.com/change-theme-in-the-metamorphosis-essay 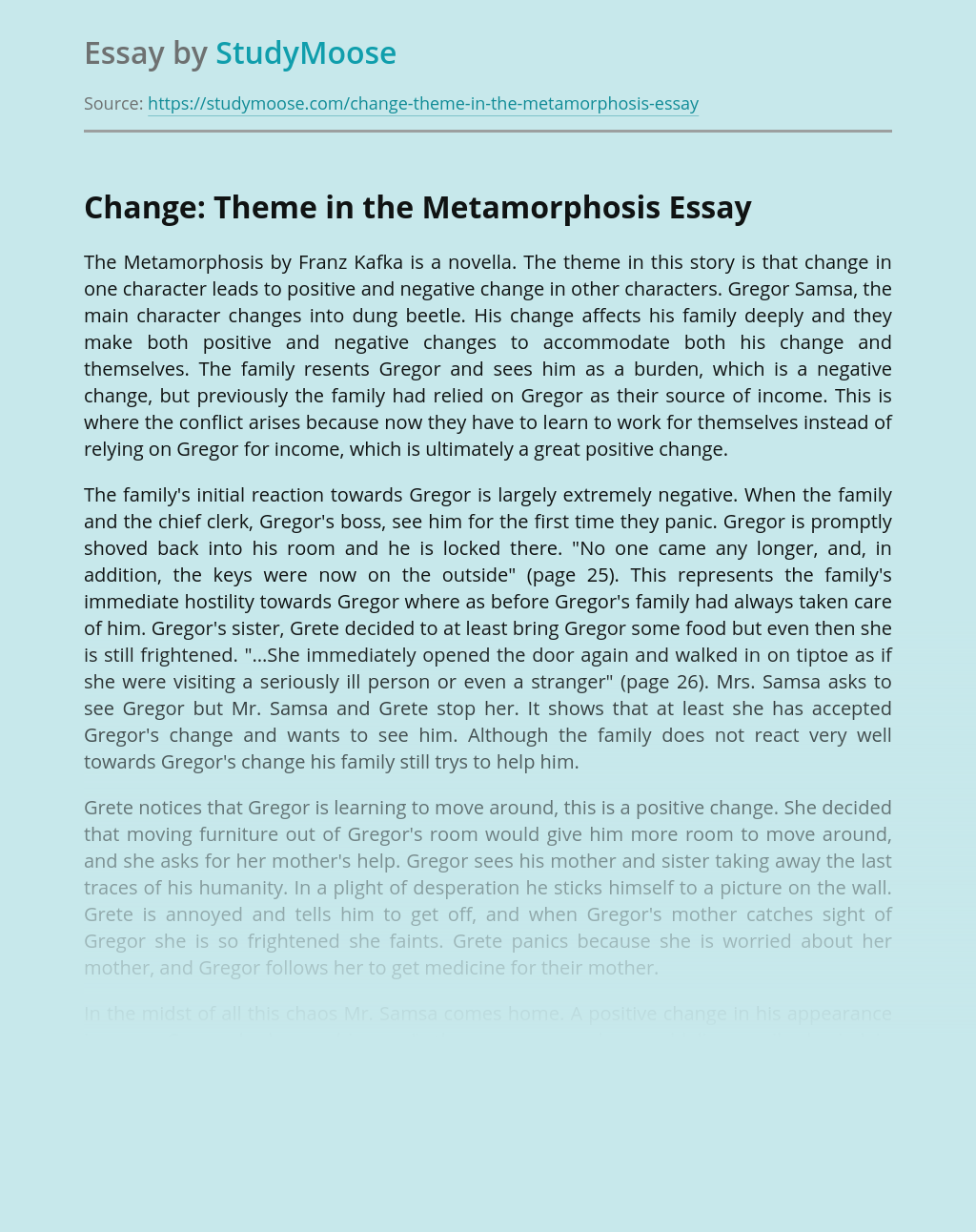 Turn in your highest-quality paper
Get a qualified writer to help you with
“ Change: Theme in the Metamorphosis ”
Get high-quality paper
Helping students since 2015
Stay Safe, Stay Original