Categories: InternetMyspaceTechnologyWorld Wide Web
Download paper
Download
Essay, Pages 4 (867 words)
Views
207
The sit-in at Greensboro, North Carolina, in 1960
reflected mounting frustration at the slow pace of racial change
By the end of 1960, some 70,000 demonstrators had taken part in sit-ins across the South to protest
segregation
Freedom Riders
challenged segregation of interstate bus terminals
James Meredith is best known as the
First black student admitted into the University of Mississippi
To whom was Martin Luther King Jr. writing his “Letter from Birmingham Jail”?
local clergymen
Martin Luther King Jr.’s “Letter From Birmingham Jail” declared that
the white moderate had to put aside his fear of disorder and commit to racial justice
When Birmingham police chief Bull Connor used nightsticks, high-pressure fire hoses, and attack dogs on young civil rights protesters
there was a public wave of revulsion that spanned the world
How were local firemen used in the 1963 Birmingham civil rights demonstrations?
assaulted young demonstrators with high-pressure hoses
The 1963 March on Washington
led by Martin Luther King, Jr.
Don’t waste time
Get a verified writer to help you with Ch. 25 – The Sixties
Hire verified writer
$35.80 for a 2-page paper

To combat communism, one of John Kennedy’s first acts was to
establish the Peace Corps
The Alliance for Progress
was President Kennedy’s Marshall Plan for Latin America
During the Bay of Pigs invasion
the Central Intelligence Agency (CIA)
failed to topple Fidel Castro’s regime
The Cuban Missile Crisis
brought the United States and the Soviets to the brink of nuclear war.
Regarding civil rights during his presidency, John Kennedy
was reluctant to address the movement’s demands until 1963
What event forced John F.
Top Writers
Allan Brooks

Kennedy to take meaningful action in support of the civil rights movement?

Birmingham
Civil Rights Act of 1964
prohibited both racial and sexual discrimination in employment and public institutions
Lyndon Johnson remarked, “I think we delivered the South to the Republican Party” after
Passage of the 1964 Civil Rights Act
During Freedom Summer,
the SNCC, NAACP, and CORE launched a voter registration drive in Mississippi
The Mississippi Freedom Democratic Party
was one of the most dramatic confrontations of the civil rights era – it was open to all residents of the state, not just whites
Republican Barry Goldwater viewed ____________ as a threat to freedom
the New Deal welfare state
25. Which politician remarked, “Extremism in the defense of liberty is no vice”?
Barry Goldwater
The Young Americans for Freedom
were conservative students portrayed as the cutting edge of a new radicalism
The 1965 Voting Rights Act
empowered federal officials to oversee voter registration
The Hart-Celler Act of 1965
abandoned the national-origins quota system of immigration, which had excluded Asians and severely restricted Europeans
The Immigration Reform Act of 1965
increased the quotas set in 1924, and European immigration has skyrocketed
The Great Society
included Lyndon Johnson’s crusade to end poverty in America
Johnson’s War on Poverty included all of the following programs EXCEPT
Alliance for Progress
The Kerner Report
blamed the urban riots on segregation and poverty
Martin Luther King Jr.’s Chicago Freedom Movement platform included
an end to discrimination by employers and unions, equal access to mortgages, the integration of public housing, and the construction of low-income housing
Malcolm X
insisted that blacks have economic and political autonomy
The New Left
called for a democracy of citizen participation
The Port Huron Statement
offered a vision for social change based on participatory democracy
The free speech movement
began at Berkeley because of the ban on their political literature
How did Mario Savio define freedom?
as “the very dignity of what a human being is “
The Gulf of Tonkin resolution
authorized the president to take “all necessary measures to repel armed attack” in Vietnam
By 1968, the number of U.S. troops in Vietnam
reached half a million
The Anti-War Movement
openly challenged the foundations of Cold War thinking
The counterculture of the 1960s can best be described as
a rejection of mainstream values
In the “Feminine Mystique” by Betty Friedan
Named the “problem with no name”
The National Organization for Women (NOW) campaigned for
equal job opportunities for women, equal educational opportunities, equal opportunities in politics, and an end on the mass media’s false image of women
At the 1968 Miss America beauty pageant, feminist protesters threw _______ into the “freedom trash can”
girdles, brassieres, high-heeled shoes, and copies of Playboy and Cosmopolitan
Radical feminists
argued that the “personal is political”
The gay liberation movement
was inspired by the civil rights movement
After the Stonewall riot
gays fought back and came “out of the closet”
Chicano farm workers found a powerful advocate in
Cesar Chavez
The Young Lords Organization in New York City represented
Puerto Ricans
In the 1960s, Latino rights were especially the focus of the
United Farm Workers and the Young Lords
The American Indian Movement
Demanded greater tribal self-government
Rachel Carson’s “Silent Spring” inspired the
Environmental movement
In 1967, the Supreme Court ruled in Loving v. Virginia that
interracial marriage was constitutional
In 1966 the Supreme Court ruled in Miranda v. Arizona that
those in police custody had certain rights
The Roe v. Wade Supreme Court decision
created a woman’s constitutional right to an abortion
Which event marked the turning point in the Vietnam conflict, forcing Lyndon Johnson to change course and pull out of the upcoming presidential race?
the Tet Offensive
The legacies of the 1960s include
a transformation in the status of women 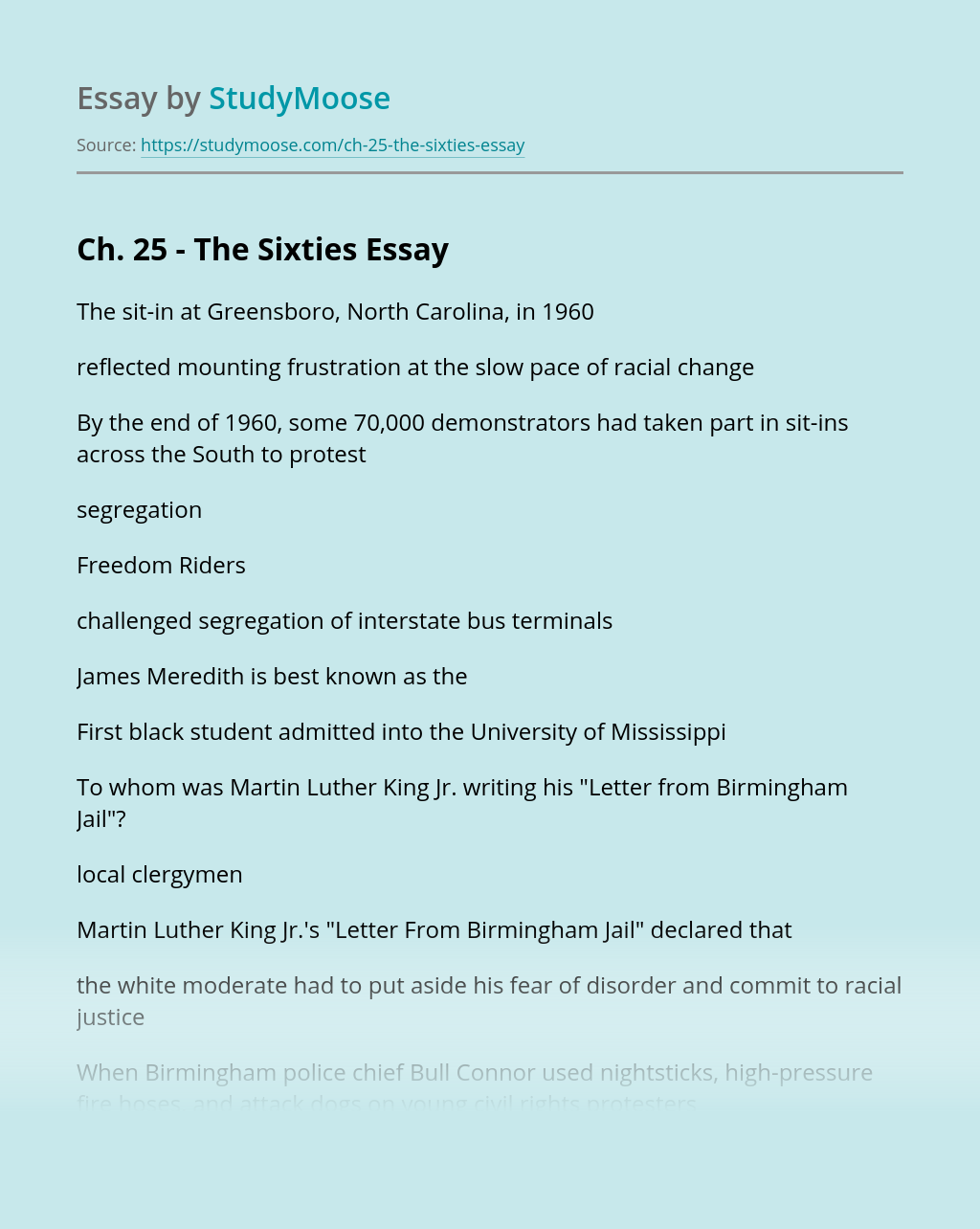