Lee launched his September 1862 invasion into Maryland with a variety of goals in mind, including all of the following except

Capturing Yorktown and possibly Baltimore
Which is not true of the battle of the Antietam September 17, 1862?
General McClellan and the Army of the Potomac followed up their victory at Antietam with a rapid “lightning strike” into the South, both against General Robert E. Lee’s forces and, subsequently, against the city of Richmond.
At the Battle of Fredericksburg, Virginia, in December 1862
Northern forces suffered one of their worst defeats of the war
Population in the North was 22 million in 1860, while the white population of the South in 1860 was
5.5 million
The Civil War is sometimes called “the first modern war” because it used weapons and other technological advances of the industrial revolution. Which of the following was not one of these advances?
Radios
During the Civil War, the term “contraband camps” was used to refer to
Camps of fugitive slaves
A “Civil War” is
A war between political factions or regions within the same country
Abraham Lincoln’s January 1, 1863, Emancipation Proclamation
freed some slaves, but exempted those in areas under Union control
Of the more than 180,000 black men who served in the Union army during the Civil War, how many died of disease, of wounds, or in battle?
1/3
Which was not true of black soldiers during the Civil War?
They fought mostly for the North, but tens of thousands also fought for the South
In what 1863 speech did Lincoln assert that the sacrifices of the Union soldiers would ensure that “government of the people, by the people, for the people, shall not perish from the earth”?
Gettysburg Address
The Homestead Act
took effect on January 1, 1863, and offered 160 acres of free public land to settlers in the West
By 1862, how many states composed the Confederate States of America?
Eleven
George E. Pickett’s crack division marched across an open field toward Union forces into withering gunfire in July 1863 at
Gettysburg
At Vicksburg in July 1863
the Union, under U.S. Grant’s leadership, was victorious
The Thirteenth Amendment to the United States Constitution, ratified in December 1865
Abolished slavery throughout the union
Which of the following was the Gettysburg Address specifically designed to communicate?
The need for national reunion
Which of the following was a Confederate advantage in fighting the Civil War?
The leading southern commander, General Robert E. Lee, was a brilliant battlefield tactician and served as head of the Confederate States army throughout the entire war.
What military action started the American Civil War?
The confederate shelling of fort Sumter
Which of the following describes the Battle of Antietam?
This was the bloodiest battle of the war
Which of the following best describes Lincoln’s plan for Reconstruction?
Relatively lenient
What did Frederick Douglass encourage African-Americans in the North to do as part of the war effort after 1863?
Enlist in the United States Army
Rose Greenhow
Was a confederate spy in Washington DC
More Americans died in the Civil War than in any other war in U.S. history
True
General George B. McClellan was notorious for his military recklessness
False
Black valor on the battlefield won over many northerners to a belief in equal rights before the law, regardless of race.
True
Women provided the chief energy for northern war relief efforts.
True
Invoking the extraordinary dangers of the moment, Lincoln called for a suspension of regular elections for the duration of the war.
False
Pickett’s charge at Gettysburg marked “the high tide of the Confederacy”
True
Over the course of the war, the Union troops had stronger morale, but the Confederate troops were better supplied.
False
Many late-nineteenth-century “captains of industry” made their initial fortunes during the Civil War.
True
From his first week in office as president, Abraham Lincoln sent troops into battle against the South.
False
Photographs of battlefields, soldiers, war dead, war encampments, and so forth carried the war into millions of Americans’ living rooms.
True
During the Civil War, the North instituted a draft, but the South never did.
False
By making the Union army an agent of emancipation and joining together the goals of Union and abolition, the Emancipation Proclamation sounded the eventual death knell of slavery.
True
Black soldiers played a crucial role in winning the Civil War and in defining the war’s consequences.
True
Abraham Lincoln was a firm supporter of votes for black Americans prior to the Civil War.
False
Government involvement in the economy was diminished as a consequence of the Civil War.
False
The first income tax was enacted under the leadership of the Republican Party.
True
During the Civil War, Congress made grants for up to 100 million acres to the railroads
True
Jefferson Davis, president of the Confederacy, was an effective leader of his new nation.
False
In March 1865, the month before the Civil War ended, the Confederate Congress authorized the arming of slaves.
True
The Sea Island experiment was an experiment in the Sea Islands of South Carolina in which a large breakwater was constructed to stop massive flooding during hurricanes.
False
The Wade-Davis Bill, introduced in Congress in the summer of 1864, required a majority of white male southerners to pledge support for the Union before Reconstruction could begin, and guaranteed blacks equality before the law, but not the vote.
True
George E. Pickett’s division marched across an open field toward Union forces in July 1863 at Chancellorsville.
False
There were thirteen state members of the Confederate States of America, the same number as stars on the Confederate flag.
False
The Emancipation Proclamation immediately freed all enslaved persons in the United States.
False
Lincoln waited until after the Union victory at Gettysburg to deliver the Emancipation Proclamation in January 1863.
False
The United States Army earnestly pursued the enlistment of black soldiers following the Emancipation Proclamation.
True
Because of the harsh cruelties she witnessed during the war, Mary Livermore believed the extension of suffrage to anyone other than white men was to blame. For the rest of her life, she opposed all forms of political enfranchisement, including woman suffrage.
False 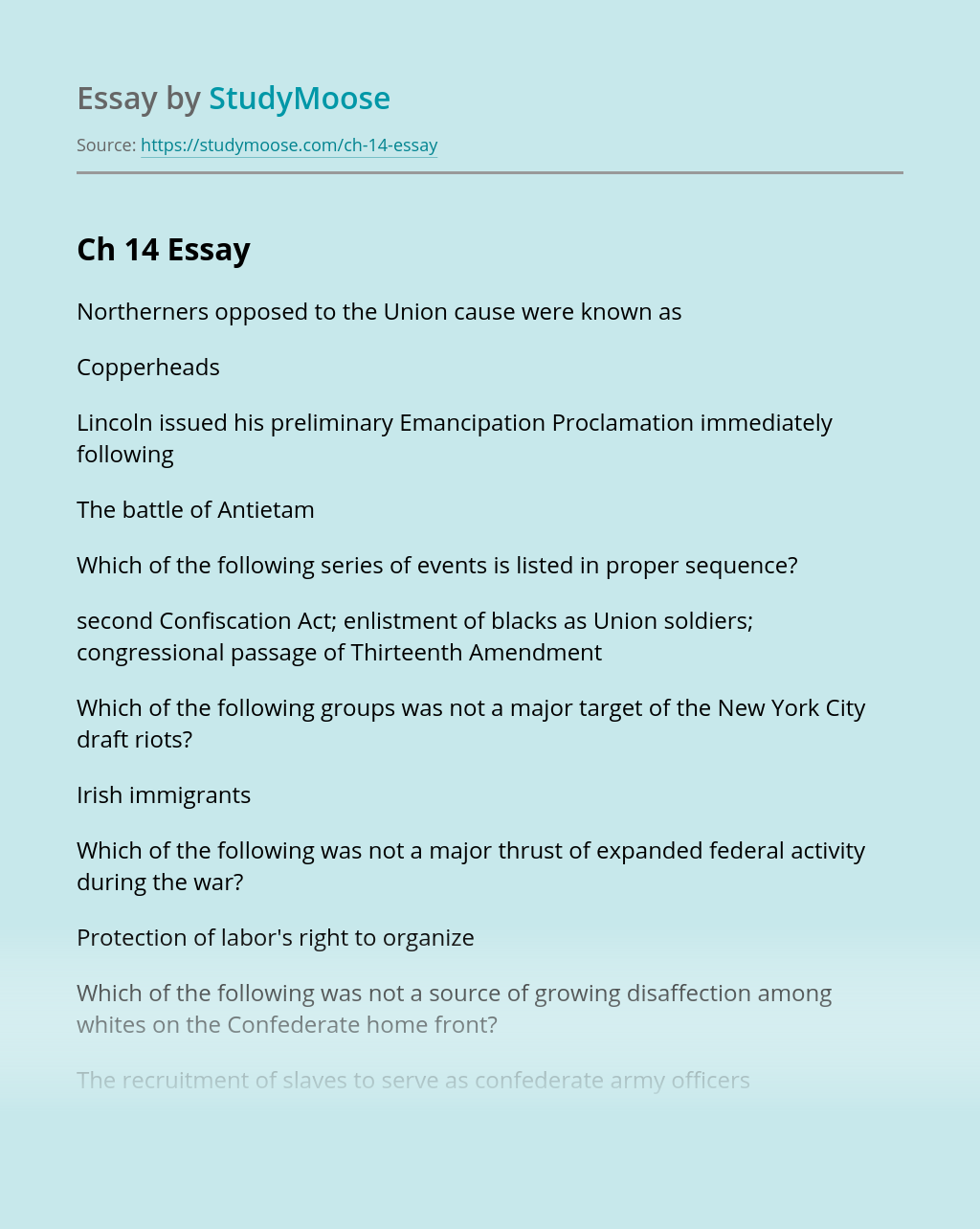 Newton’s First Law of Motion states that an object in motion tends to stay in motion in the same direction unless acted upon by an external force. Tell us about an external influence (a person, an event, etc.) that affected you and how it caused you to change direction.             My best friend taught me... VIEW ESSAY

What took place in Germany more than 50 years ago that made Holocaust perpetually imprinted in the history of man? What made an entire country support and commit planned, strategic, and state-sponsored acts of genocide during this time? The extermination of approximately six million Jews during the time of Hitler happened more than half a... VIEW ESSAY

In David McCullough’s June 2012 Commencement Speech You Are Not Special, he argues that no one is really special. In this speech he is saying that everyone is alike somewhere and somehow. Even though he is seems to be bashing the graduating class, he still adds encouraging words. Throughout the whole speech he continuously states... VIEW ESSAY

Watching a drama clearly is more effective than reading a drama, and in the same perspective comparing a drama that is watched to a short fiction that is read is undeniably on two different ends of the spectrum. The usefulness of a story that has more meaning within itself than intended on when watching itself... VIEW ESSAY

View sample
My Ride Along

My ride along wasn’t at all that exciting. It had a boring officer who seemed to not really want to have someone with him at the time. I did make the most of the time I had while I was there. I was very observant of the things that I saw around Polk county. For... VIEW ESSAY