This is a hugely popular dish in South America. It was first created in the South American country of Peru. The basic ingredients can be raw fish, shellfish, or a vegetarian. It is cut up into bite-size pieces and marinated in the juice of an acidic fruit, salt, and seasonings. Ceviche is an old tradition in South America, dating back to the earliest inhabitants. According to common wisdom, the lime juice “cooks” the fish partially or completely depending on how long it is marinated.

Don't use plagiarized sources. Get your custom essay on
“ Ceviche: Pacific Ocean and South America ”
Get custom paper
NEW! smart matching with writer

The citric acid in the lime juice does alter the structure of the proteins in the fish, making the fish more opaque and firm.

Ceviche is usually made with sea bass or flounder, you can also use shellfish or just vegetables. Other ingredients vary widely. Ecuadorian ceviche is often made with shrimp and ketchup in addition to the lime juice, and served with corn nuts. In, Chile ceviche is made with Chiliean sea bass, grapefruit juice, and cilantro.

In Peru, ceviche is garnished with thinly sliced onions and aji limo or rocoto peppers. It’s served with sweet potatoes and large kernel Andean corn on the cob. Ancient civilizations in Peru and Ecuador had access to fresh seafood along the coast of the Southern Pacific Ocean.

The Humboldt current supplied the region with a rich variety of fish, squid, and shellfish. Smaller tribes along the coast, took raw seafood and created a basic version of ceviche. They would season the raw fish with chile peppers, salt, and herbs.

Fruit marinades such as chichi and tumbo were used to complete this primitive dish. As Spanish and indigenous culture merged into Peru and Ecuador, the natives began to experiment with new ingredients. Cooks paired the juice of the citrus fruits like lemons, limes, and oranges with the fresh seafood brought in from the coast.

It was then that ceviche as we know today was first invented. It was discovered that the acid in the citrus juices added flavor and cooked the raw meat, making for a more easily digestible meal. Over the past few centuries, throughout South America, ceviche has evolved. Many countries in Latin America began to copy the idea and create their own variations. Most versions contain standard seafood and lime juices, with minced hot peppers, diced red onion, and chopped cilantro. In Peru, ceviche is often served with cold slices of sweet potatoes or yucca.

Corn on the cob is also a common side dish. Ecuador does things a little bit differently, adding popcorn and nuts. Mexico also has it’s own invented ceviche, served on toasted tortillas. Ceviche was once a dish found only by brave travelers in South America willing to try something new. This unique recipe has grown so much in popularity, that there are now different types of ceviche all around the world. While ceviche remains unknown to many people in the United States and Europe, this delicious culinary invention is steadily making a name for itself, plate by plate. 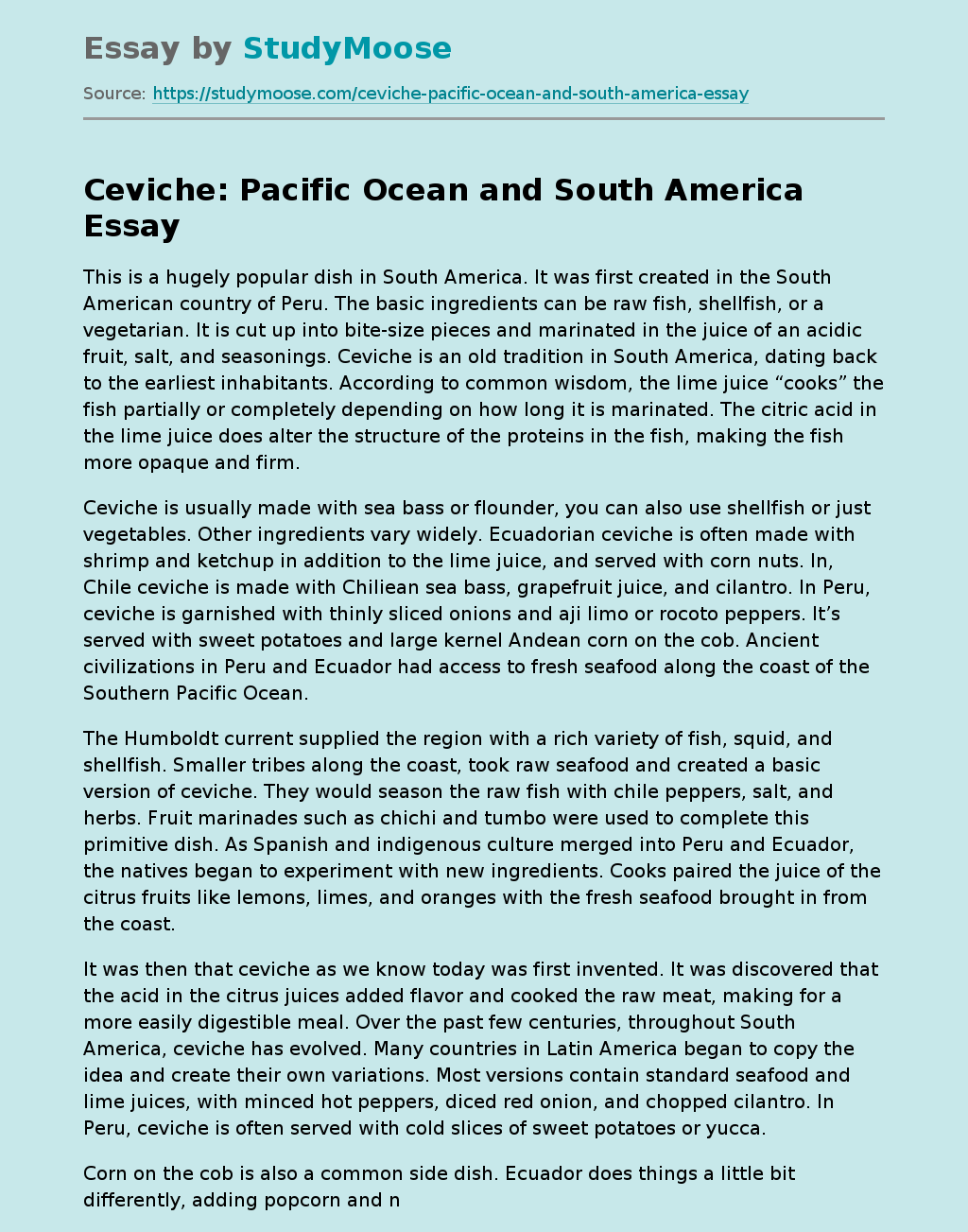