Observing the effects of ammonium nitrate has on the germination days of C-Fern gametophytes by constructing an experiment with two spore-sown petri dishes, one control and one treatment – a normal nutrient-rich agar petri dish and an ammonium nitrate-containing petri dish respectively. The two petri dishes were each inoculated with three drops of spore suspension by a pipet, then spores were spread by a sterilized-bent paper clip to allow even distribution of spores.

Don't use plagiarized sources.
Get Your Custom Essay on Ceratopteris Fern Growth and Analysis Just from $13,9/Page

Following the gametophyte displaying its hermaphrodite form, sexual maturity allows cross-fertilization to occur between the sperm from antheridium and the egg from archegonium. After one sperm fertilizes the egg, a zygote forms, thus forming a diploid cell (Hoshizaki 2001).

Two 60 mm petri dishes were prepared. One labeled “C” for control, another labeled “T” for treatment. The control contained a layer of agar and the treatment contained agar and ammonium nitrate. Petri dish for control was inoculated with three drops of C-Fern spore suspension via a pipette, and petri dish for treatment was inoculated three drops of C-Fern spore suspension via the same pipette. A Bunsen burner was used to sterilize a bent “T” shaped paper clip, the paper clip was used to spread the spore suspension in the petri dish for control. The same paper clip was sterilized again by a 70% ethanol solution and was used to spread spore suspension in treatment petri dish. Two petri dishes were each covered with a lid and now considered culture trays, culture trays then were transported to a climate controlled light dome for optimal growth. Light dome maintained a full spectrum of light 24/7 with temperature in the range of 28 to 30 degrees Celsius. Observations were made on every Friday at approximately 3:10 pm for the next 3 weeks. 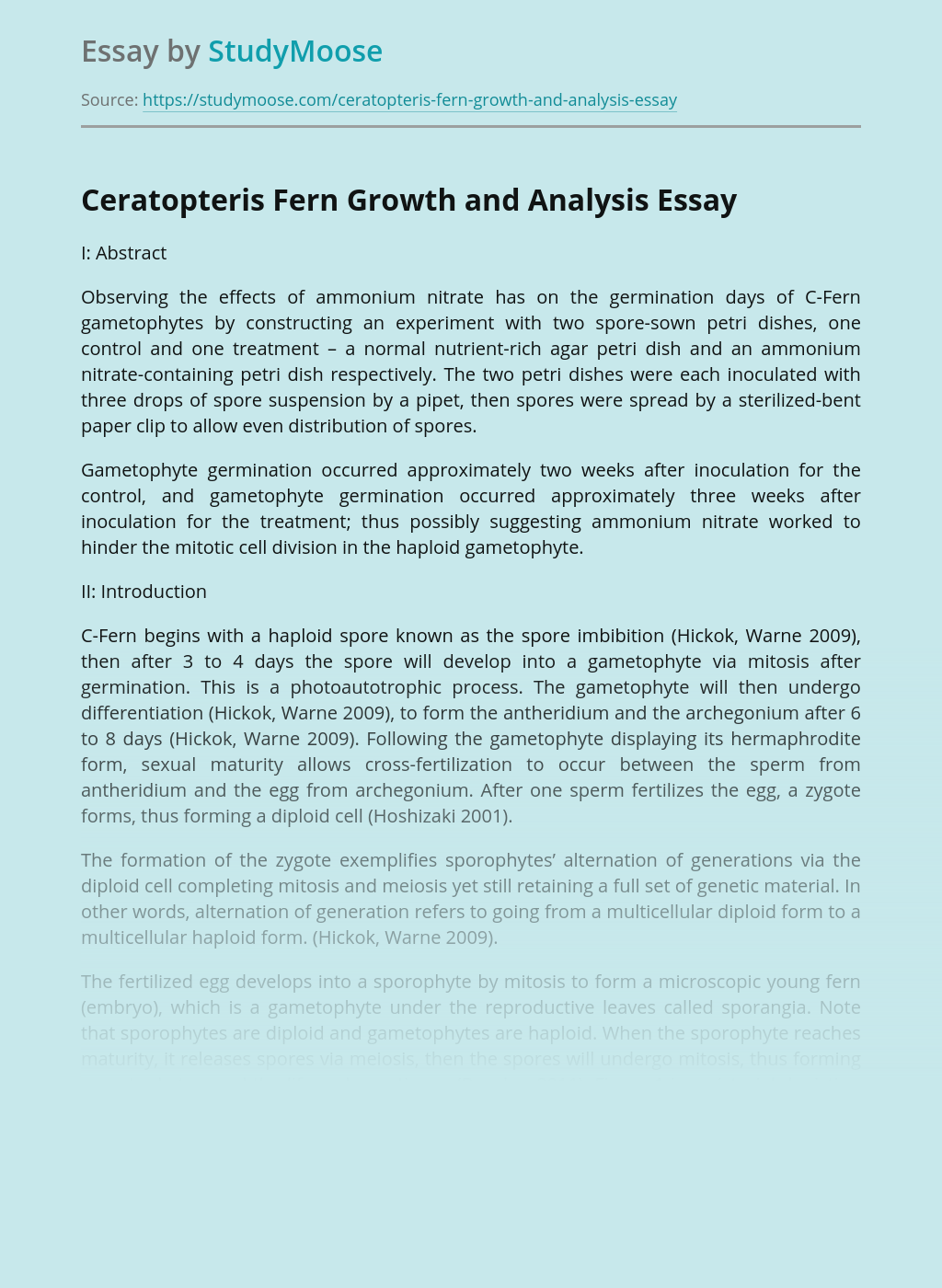 Rate this post Araby, by James Joyce is a story about a young boy experiencing his first feelings of attraction to the opposite sex, and the way he deals with it. The story’s young protagonist is unable to explain or justify his own actions because he has never dealt with these sort of feelings before,...

"The Chase "by Annie Dillard

Rate this post In “The Chase” by Annie Dillard, the actual chase sequence is only six paragraphs long, a relatively short selection. But when read by the reader the passage seems to be much longer than only six paragraphs. This effect is made possible through Dillard’s excellent use of description, details, transitions, repetition, sentence variety,...

Rate this post Born in 1909, Rita Levi-Montalcini was a Jewish/Italian cell biologist was born on April 22, 1909 in Turin, Italy. Her father was an electrical engineer as well as a talented mathematician and her mother was a painter and a mother of four. Rita was the youngest and had a twin sister and...

Comparing Palys The Crucible and Macbeth

Rate this post My practical operate in November 2002 was for alternative 2. It was a piece of scripted performance and was based upon the style of witches and the supernatural. My contribution to the performance was a character called Marry Warren. I needed to assist a character called John Proctor; this is because Marry...