Cell phones How have they changed us socially?

Filed under Fall 2013, Story Cycle 4, Features, Opinion, Showcase The short URL of the present article is: http://lhslance.org/bKUbA We live in a world where communication through modern technology is almost required. Everywhere people are texting, emailing, writing blogs and tweeting. It’s hard to go anywhere without seeing someone using a phone or the Internet to connect with others. Can you imagine not being able to check your Twitter, Facebook or messages for a week? We would feel lost.

Don't use plagiarized sources. Get your custom essay on
“ Cell phones How have they changed us socially? ”
Get custom paper
NEW! smart matching with writer

“Cell phones have changed communication because now, instead of friends actually having a face to face conversation, they text each other.

This is bad because intent become misinterpreted, which can lead to ‘drama’ and friendship problems. The use of cell phones has affected me because whenever I am in a situation, instead of trying to make a conversation I resort to my cell phone,” Junior Taylor Strahan said. How the message is sent can determine many additional factors as to how the message is interpreted by the receiver. All new information we learn is compared with the knowledge we already have. If it confirms what we already know, we will likely receive the new information accurately, though we may pay little attention to it.

If it disputes our previous assumptions or interpretation of the situation, we may distort it in our mind so that it is made to fit our world view, or we may dismiss the information as deceptive, misguided, or simply wrong.

For example, if two people are involved in an escalated conflict, and they each assume that the other is going to be aggressive and hostile, then any ambiguous message will be interpreted as aggressive and hostile, even if it was not intended to be that way at all. Our expectations work as blinders or filters that distort what we see so that it fits our preconceived images of the world. According to pewinternet.org, “a bit more than a third (37%) of social network-using teens said they sent messages to friends every day through the social sites, a drop from the 42% of such teens who said they did so in February of 2008”. Face- to -face communication among children and teenagers is being squashed out by social networks. A phone call isn’t used to get in touch with someone anymore; Facebook and Twitter are the main tools of communication.

The consequences of this are social awkwardness and even social anxiety when confronted with new people to meet in person. A study was done by pewinternet.org among teenagers on social networks, and the amount of communication among teenagers on social networks, and the amount of communication by social network has remained steady. Studies show that homework is interrupted and children become distracted when they receive notifications of a new chat messages, texts, or emails. “Good communication is important because when we are adults and applying for interviews, we won’t know how to have proper communication, which can result in not getting the job. Another thing is kids are so focused on social networking on our phones that we spend less time on school work which causes bad grades. In the future when applying for college, they won’t accept us because we have bad grades and that is due to cell phone use,” Strahan added. 7

Texting has, in many ways, made communication easier by helping people avoid long, unpleasant phone conversations and making a quick “Hello” much easier. According to the Pew Research Center, 72% of teenagers text regularly, and one in three sends more than 100 texts per day. Clearly, texting is the preferred method of communication among young people, and that trend is moving upward toward adults, who are also texting much more frequently. Studies have shown that it makes it difficult for students who rely so heavily on technology to actually communicate to adults in person because they don’t quite develop all of the necessary skills to hold or even start a face-to-face conversation. However, these skills are a crucial tool in the workforce. If you want a high paying, stable job, or possibly even to be admitted to a university, you must have good face-to-face communication skills. If you lack these specific skills you most likely won’t even make it through the interview. “Teens are in the stage of their life where they’re learning so if you don’t learn to have good communication skills, then when you become an adult you will have a harder time asking for help, being proactive with things in your life,” said reading specialist Mrs. Tracey Cassidy.

Students who are constantly texting with abbreviated forms of words have begun to speak with the same acronyms. The now everyday uses of “LOL” and “OMG” have become substitutions for actual emotional responses in conversations. This form of talking is often seen as flighty and uneducated. They’re not only speaking in abbreviated ways but they are also beginning to become distracted during conversations. While texting, it is easy to jump from topic to topic when an idea comes to mind. However, this is causing many students to become unfocused and sidetracked during face to face conversations. “I think that some cell phones have opened up communication for teens 100% because that’s how they communicate with their friends, parents, with their school work. I think it’s fantastic, and that’s what they really rely on, so it is good but some negatives are their communication skills are not as strong as they should be, like talking to other people,” Cassidy added.

“When I was a teen we did not have cell phones or computers. I had a telephone in my room (which was a big deal) it was attached to the wall with a long cord and was then attached to a base so I couldn’t walk around the house and talk on the phone. I had to say in my room for privacy. Before I got my own phone I would use the phone in the kitchen, I would stretch the phone cord as far as I could and then go into a closet for privacy,” parent Barbara Dempster said. “Communication is a way for people to connect with each other and form relationship. It is also a way to gather information from others. I like the variety of ways that people can communicate and keep in touch with one another. I do feel that the importance of face- to- face communication has been impacted by the use of cell phone and texting vs. talking on the phone,” Dempster added. We have become a society that is completely dependent on our technology to communicate with others. It’s almost impossible for us to maintain our social life without using some sort of modern-day technology to communicate.

“In terms of communication, it is harder for teens to communicate face to face with people with maybe teachers, because they’re so used to doing it via email. Sometimes it’s good, meaning if you don’t like a grade you have, you can email the teacher saying you have concerns about your grade. Where if you don’t have an email, you have to talk to your teacher about the grade you don’t like and you might be nervous and uncomfortable because it’s your teacher,” Cassidy said. “I would tell teens that there is a time and place for texting and there is a time when you need to have a conversation either face to face or over the telephone,” said Dempster. “Texting is great when you need to find out information quickly – Are you still coming over? Do you want a soda? Where are you?” Dempster believes other situations require face- to -face like, “When you are joking and it may be difficult for the other person to sense your humor or sarcasm, communication with a teacher or adult. When telling your parents you did something wrong,” Dempster said. According to Pew Research Center, “As technology continues to improve, the use of cell phones continues to change drastically.

The increase over the last ten years has been incredible and the way we use our phones to stay connected and informed continues to change.” “The average American smartphone user spent nearly 30 minutes a day checking or updating social networks. The way we use cell phones has changed drastically over the last year. Once upon a time, we used cell phones to make calls while we were away from our homes. Recent studies show that we may be migrating away from our primary use of the phone to more of a texting and mobile web device.” Research from www.accuconference.com states that in 2012

•53% of adults own a smartphone.
•42% of people have used their phone for entertainment when they are bored.
•51% of users used their cell phone at least once to get information.
•27% said they had trouble doing something because they did not have their phone.
•29% turn off their phones to take a break from their digital life at night.

This article is not to say that mobile phones should be banned due to their many negative aspects. It depends upon us whether we use this technology for our progress and prosperity or for our destruction. No doubt, mobile phone is the best innovation of this era but people should use it in a positive sense.

Cell phones How have they changed us socially?. (2016, Apr 03). Retrieved from http://studymoose.com/cell-phones-how-have-they-changed-us-socially-2-essay 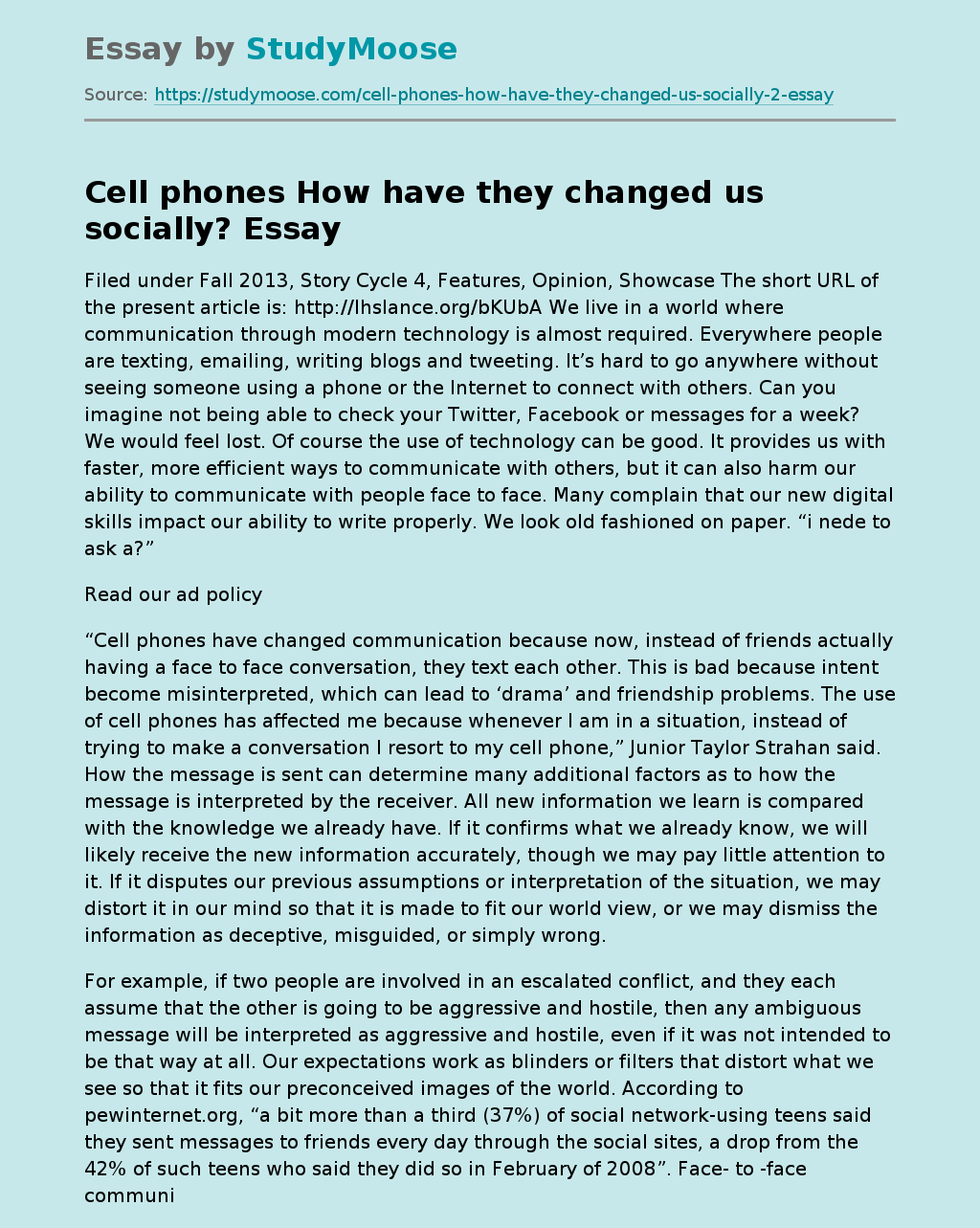