Celebrities are those people who are always under public attention. The media and fans are keeping an eye on their strange or outrageous antics. Such people influence the world because the youth look upon them. Most tabloids, magazines publish various articles about famous people, and lots of teenagers and even adults want to know everything. Journalists do not only share information about the known facts about the celebrity. They try to get lots of photos which would show the person not from the best side.

Turn in your highest-quality paper
Get a qualified writer to help you with
“ Celebrities deserve privacy ”
Get high-quality paper
NEW! AI matching with writer

They do this just to attract more readers. The private life of public figures becomes unprotected. It is no wonder that it is impossible to look perfect all the time, and paparazzi catch such moments by taking spontaneous photos.

The media want to find out everything about the celebrities, and usually, they are not looking for something good. Scandals, affairs, illnesses, problems are those issues that create intrigue. Paparazzi invade privacy ludicrously and consider this to be a norm.

However, celebrities are just ordinary people who deserve to have personal lives which are not recorded. They have secrets, and it is normal that they are not eager to share this with all the world. What is more, paparazzi start chasing children, friends, parents of famous people. It is significant to bear in mind that everyone should have privacy, and media should step back from invading personal lives.

It is not that difficult to become a “celeb” these days thanks to various TV shows and the Internet.

It seems that being famous is just about walking on the red carpet, taking beautiful photos, and attending parties. The spotlight looks deceptively great. However, everything changes when media start chasing others to get scandalous news. When a celebrity begins a new relationship, changes job, gets pregnant, or gets involved in any other personal situations, this all becomes known on the Internet pages. And it is not even the worst aspect. The biggest disadvantage is that lots of people adore criticising others. They share their opinions, write comments, although you have never asked them to discuss your private life. It is good if such comments are positive, but when they are focused on the negative side, it becomes annoying and embarrassing.

Another negative side of invading the private life of celebrities is that they cannot simply go outside to have a cup of coffee. Photographers, fans, journalists are always waiting for the person from the closest corner. Famous people have to hide faces just to avoid such overwhelming attention. Sometimes even ordinary people need silence and solitude. However, these words may sound unreal for the celebs. People have to understand that being famous is just the same job as any other: teacher or doctor. Each profession requires privacy because we are all humans and should respect each other.

The most dangerous aspect of the paparazzi is that their chases for a sharp photograph of the celebrity can turn into a fatal event. The world-known tragedy with Princess Diana happened in 1997. She was called “the most hunted person of the modern age,” because she was popular all around the globe. Princess Diana was followed by hundreds of journalists and photographers every day. Paparazzi did everything possible to find out where she was going or driving. They wanted to get a good shot, write a booming article in the magazine, and get lots of money. Photographers spent days and nights trying to find Diana and take a picture. However, these crazy chases happened too often. One day when Princess was followed by the speeding car with paparazzi, the vehicle where Diana sat, crashed and she died very quickly. After this situation, people started to despise such crazy attempts of photographs to find celebrities. Unless such obsessed chases stop, there will be more and more similar fatal events.

Each human deserves privacy because sometimes there are such events that people do not want to share with anyone. Thinking about the celebrities who suffer from serious illnesses and take hospital care abroad, it seems weird that paparazzi may follow such people just to take a photo of an ill man or woman. There are lots of situations when photographs post pictures with celebrities who feel bad, have an awful look because of medical treatment or surgery. It is more than clear that no human will ever have a desire to show such photos even to friends. What can be the person’s reaction when his pics are everywhere on the Internet? This may lead to stress, depression, other diseases. There is no excuse for those “photo-hunters” who neglect individual’s privacy at least when the person does not feel good.

It is significant that the fans, as well as social media representatives, see clear limits between the public and private life. There is a lot of information which people want to find out about the famous personalities. For example, it is interesting to know how the celebrities achieved success, what their motivation and inspiration are. Journalists can ask such questions during the scheduled time for an interview. However, when it comes to personal life such as love, friendship, salary, these issues should be kept in confidentiality, unless the person wants to share this with everyone.

Privacy intrusion is not ethical because it is intentional, and should be forbidden by law. People’s photos should be posted only with the permission. Otherwise, paparazzi must be fined. Sometimes when secret photographers post bad pictures and add scandalous articles, this may ruin private lives. In such situations, famous people have to sue the journalists who invaded their privacy. Having said that, some people say that bad fame is still fame. Because of the work of paparazzi, unknown people can become popular. However, it is still up to them to decide whether such sacrifice is justified. It means that if a public figure is against privacy intrusion, his or her desire should be protected by law.

No matter which life a celebrity leads, no one can ever have a right to judge a person and spread gossips via the Internet. It is not that hard to make a photo and create a scandalous title which will make somebody notorious. However, it is hard to return good fame for a famous person after such gossips. Unfortunately, lots of readers are “blind,” and they believe everything they see. There is no guarantee that the photo has not undergone Photoshop Editing or the whole news is just a huge lie. People should be more critical when commenting on such posts which have relation to the celebrities’ personal lives. If humans appreciate one another as well as the personal space of each individual, there will be fewer conflicts and problems not only in the world of celebrities but everyday life of ordinary people. 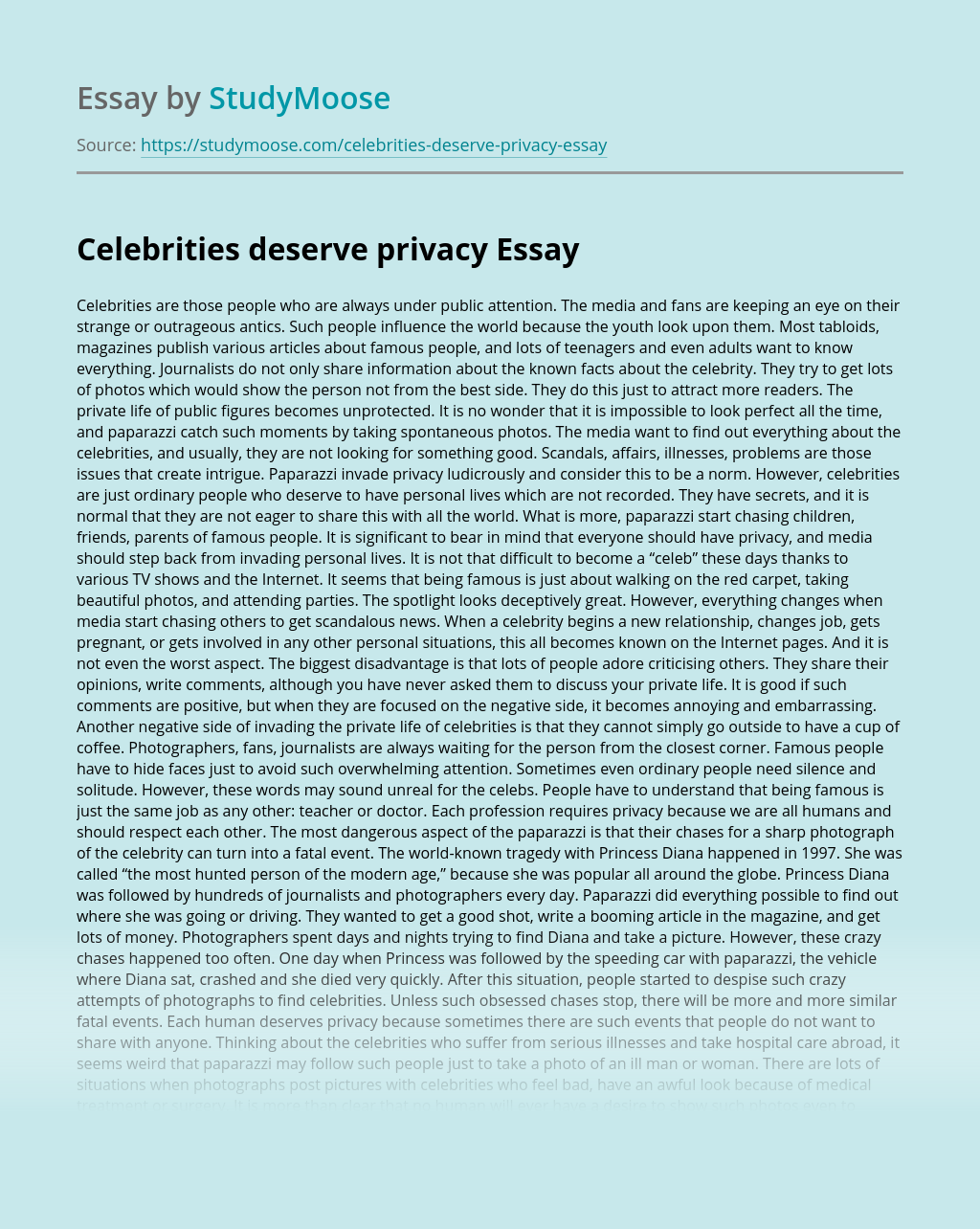 Turn in your highest-quality paper
Get a qualified writer to help you with
“ Celebrities deserve privacy ”
Get high-quality paper
Helping students since 2015
Stay Safe, Stay Original