The American Psychological Association states that, “Teen suicide is a growing health concern. It is the 3rd-leading cause of death for young people ages 15 to 24” (Teen Suicide is Preventable). As youth suicides are becoming more publicized, society is gradually becoming more aware of this global concern. Although most people do not understand why teenagers commit suicide, the three social sciences, anthropology, sociology, and psychology, provide insights that go beyond what the media reports as causes because through cross cultural studies, they provide information of many societal and psychological processes which confirm and expand on our understanding of this complex issue.

Most people only understand adolescent suicide to the points expressed by the media. The media claims that the suicide risks are higher for those who go through depression, anxiety, mental illness, substance abuse, social isolation, bullying, or sexual abuse, and also for those who have disabilities or are LGBT (lesbian, gay, bisexual, or transgender) youth. The media also claims that LGBT youth have higher suicide risks than others as they tend to have added stress and high levels of anxiety and depression, and are likely targets for bullies (Teen Suicide, 2011).

The facts proven my the media are not to be underestimates, however, the media is often ignorant about how teen suicide works in other cultures. Teenage suicides in other societies work in different ways than in our Western society. On the islands of Micronesia, suicide has become a regular ritual for teenagers (Gladwell, 2002, p.

218). This act, considered mindless in our society, is an important form of self-expression in theirs (Gladwell, 2002, p. 220). The adolescent suicide epidemic of Micronesia can easily be compared to the teen smoking epidemic of our society. Like smoking in Western and European cultures, young people experiment suicide in Micronesia. Anthropologist Donald Rubinstein noted that in Micronesia, boys as young as 5 years old lean on a noose where unconsciousness follows, for experimental play (Gladwell, 2002, p. 219). They risk dying from anoxia, the shortage of blood to the brain (Gladwell, 2002, p. 218), as teens in our society risk dying from lung cancer or other illnesses. Youth suicides on the islands are becoming more frequent in communities as younger boys are affected by the contagious self-epidemic of self-destruction, as younger people in Western and European cultures are by smoking, in forms of experimentation, imitation, self-expression, and rebellion (Gladwell, 2002 p. 219-220). Like Gladwell (2002) said, “the way we have tended to think about the causes of smoking doesn’t make much sense”, as do the ways we think about the causes of suicide (p. 221). It is unknown of how to fully prevent it or to even fully comprehend what it is. People smoke even though the overestimate the risks and suicide victims are equally aware of the results when they decide to end their own life (Gladwell, 2002, p. 221).

The three social sciences provide thorough insights of the suicidal triggers displayed by media. In the situation of the Innu adolescent suicides where youth inhale gasoline, anthropologists, sociologists, and psychologists, identify causes that are unfamiliar to most people. Anthropologists observed substance abuse and family violence among Innu families, which are clear signs of cultural collapse (The Innu, 2001). Cultural collapse occurs as they lose effective control of their lives, in this case, by the government and immigrant populations. They lose their self-esteem and their value of lives (The Innu, 2001). The Statistical Profile on the Health of the First Nations in Canada for the year 2000 shows that suicide and self-inflicted injuries are the leading causes of death for First Nations youth (First Nations, 2013). Statistics show that the suicide rate for First Nations youth is around 5 or 6 times greater than of non-Aboriginal youth. The suicide rate for First Nations males is 126 per 100,000 compared to 24 per 100,000 non-Aboriginal males, and the rate for First Nations females is 35 per 100,000 compared to 5 per 100,000 for non-Aboriginal females (First Nations, 2013). Sociologists have blamed colonialism and past government policies such as residential schools contributing to a sense of powerlessness and inferiority among the Innu youth. This has led to escalating levels of self-hatred and self-destructive behaviour (The Innu, 2001). Cultural hegemony has made the Innu feel inferior that their cultural practices have no value or place in the modern world (The Innu, 2001). The suicides of the Innu youth would be anomic suicide, which is a suicide that is caused by the failure of social order (Summary, n.d.). It occurs when rapid and extreme changes in society overwhelm and threaten a group.

The individuals would become uncertain of what behaviour is expected of them, leading to role confusion and then the act of taking one’s life (Kok & Goh, n.d.). From a psychologist’s point of view, role confusion is a key factor in the emotional disturbance of the Innu youth (The Innu, 2001). According to Maslow’s hierarchy of needs, the Innu do not even have their first and basic needs being met (McLeod, 2007). They do not have running water, sewage disposal, and proper insulation for Canadian winters (The Innu, 2001). They also so not have their second and third needs which are safety needs and social needs. They do not feel secure and safe in the environment they live in and they lack social needs of belongingness, love, and relationships with others (McLeod, 2007). And because they do not have these first three needs, they cannot move up the hierarchy and achieve esteem needs of achievement and independence, and self-actualization needs of seeking personal goals (McLeod, 2007). Psychologist Erik Erikson notes that youth must resolve two life crises, the first being the crisis of identity vs. identity confusion.

The individual must find their own unique identity and have a sense of belonging at the same time. If they are unsuccessful, they can become socially disconnected or develop an exaggerated sense of self-importance, and therefore end up being unable to be emotionally mature adults (Oswalt, n.d.). The second crisis is the crisis of intimacy vs. isolation, where youth must learn to maintain close relationships with others. If they are unsuccessful, they can become self-contained, needy, dependent, isolated, or vulnerable, and unable to have honest or mutual relationships (Oswalt, n.d.). The situations presented my Maslow and Erikson lead to results of the teenagers being aimless and lacking purpose in life, because of a lost sense of self. This second crisis applies well to the Micronesian youth, who end their lives as a result of not being able to emotionally deal with a domestic conflict within a domestic relationship. There was a teenage boy who committed suicide because his parents would not give him a few dollars for beer, another who ended his life because he was scolded by his brother for making too much noise, and a number of teen boys who killed themselves because they saw their girlfriends with another boy (Gladwell, 2002, p. 217-218). Many adolescents in Micronesia become emotionally susceptible and commit suicide as actions of self-pity and protest against mistreatment (Gladwell, 2002, p. 218).

We can understand that suicide involves many societal and psychological processes which confirm and expand on our understanding of this complex issue. In Micronesia and Japan, the youth suicides are classified as egoistic, which is caused by excessive individualism (Summary, n.d.). It occurs when an individual is overwhelmed by a group and they isolate themselves as they become excessively independent (Kok & Goh,n.d.). In Japan the Aokigahara Forest, also known as the “suicide forest” on Mount Fuji, is a place where individuals commit suicide, usually by hanging, after isolating themselves completely by hiding in the wilderness of the forest. Those who still doubt about ending their lives walk in the forest while leaving a trail of coloured tape so that they do not get lost, and others camp for a few days in the wilderness before making their final decision (Suicide Forest, 2012). The suicides in the “suicide forest” increased in number as it was gradually publicized, starting with a novel by Kuroi Jukai, where a young lover commits suicide in a forest (Suicide Forest, 2012). Since then, the suicide numbers reached over 100 deaths a year. The area holds so many bodies that homeless people are paid to remove the corpses (Suicide Forest, 2012). Sociologist David Philips conducted a number of studies on suicide and the results concluded that suicides are influenced by the contagious effect (Gladwell, 2002, p. 222).

Immediately after stories of suicides appeared locally, the number of suicides in that area jumped. When there was a suicide story publicized nationally, the national suicide rate jumped (Gladwell, 2002, p. 222). This contagious effect is an act of imitation, and Philip states that it is a “permission to act from someone else who is engaging in a deviant act” (Gladwell, 2002, 223). This applies to the cases of suicides that continue to take place in the “suicide forest” and also in Micronesia. In the early 1960s, suicide in Micronesia was extremely rare and yet by the end of the 1980s the suicide rate was higher than anywhere else in the world (Gladwell, 2002, p. 217). According to Statistics Canada, the suicide rate in 2009 for Canadian males between 15 and 24 was about 15 per 100,000. In contrast, the suicide rate in Micronesia for males between 15 and 24 is 160 per 100,000 (Gladwell, 2002, 217). In a community on the Micronesian island of Ebeye, the first suicide in that area led to a second, third, and twenty five more over twelve years (Gladwell, 2002, p. 226). Further studies show that people who are influenced by the contagious effect commit suicide using the same method as the one used in the event they were effected by. Stories of suicide where the victim was a driver resulted in an increase in single-car crashes. Stories of suicide-murders resulted in an increase in car crashes with victims of a driver and passengers (Gladwell, 2002, p. 224). This copycat suicide is common among youth, and is displayed in Micronesia. Almost all the suicide cases of teenagers take place in a remote spot or empty house, and involve a specific process of hanging by leaning on a noose until unconscious and dying from anoxia, the method that children play around with (Gladwell, 2002, 218). And because of this contagious effect, the media takes precautions when publicizing suicides. For example, some suicides in the Toronto subway systems are never reported in the press (Teen Suicide, 2011).

Even though most do not understand why teenagers commit suicide, the three social sciences provide information to expand our understanding of this complex issue. Anthropologists help us to understand how suicide is affected by the way people live, and how people in different cultures respond to suicide, such as the little boys in Micronesia who experiment with it. Sociologists have figured out the contagiousness of a suicide and how easily it can cause others. Psychologists help us to understand what teenagers deal with, such as the two crises that Erik Erikson has noted. With these thorough understandings provided by the social sciences, people should be able to be aware of what causes teenage suicide, as it can happen anywhere at anytime and an effort should be made to prevent it. Already many communities have taken action to bring awareness of teen suicide, inspired by suicides of loved ones, so that it may be looked for and be prevented. There is no simple solution to adolescent suicide, however, efforts can be made to avert as many as possible. 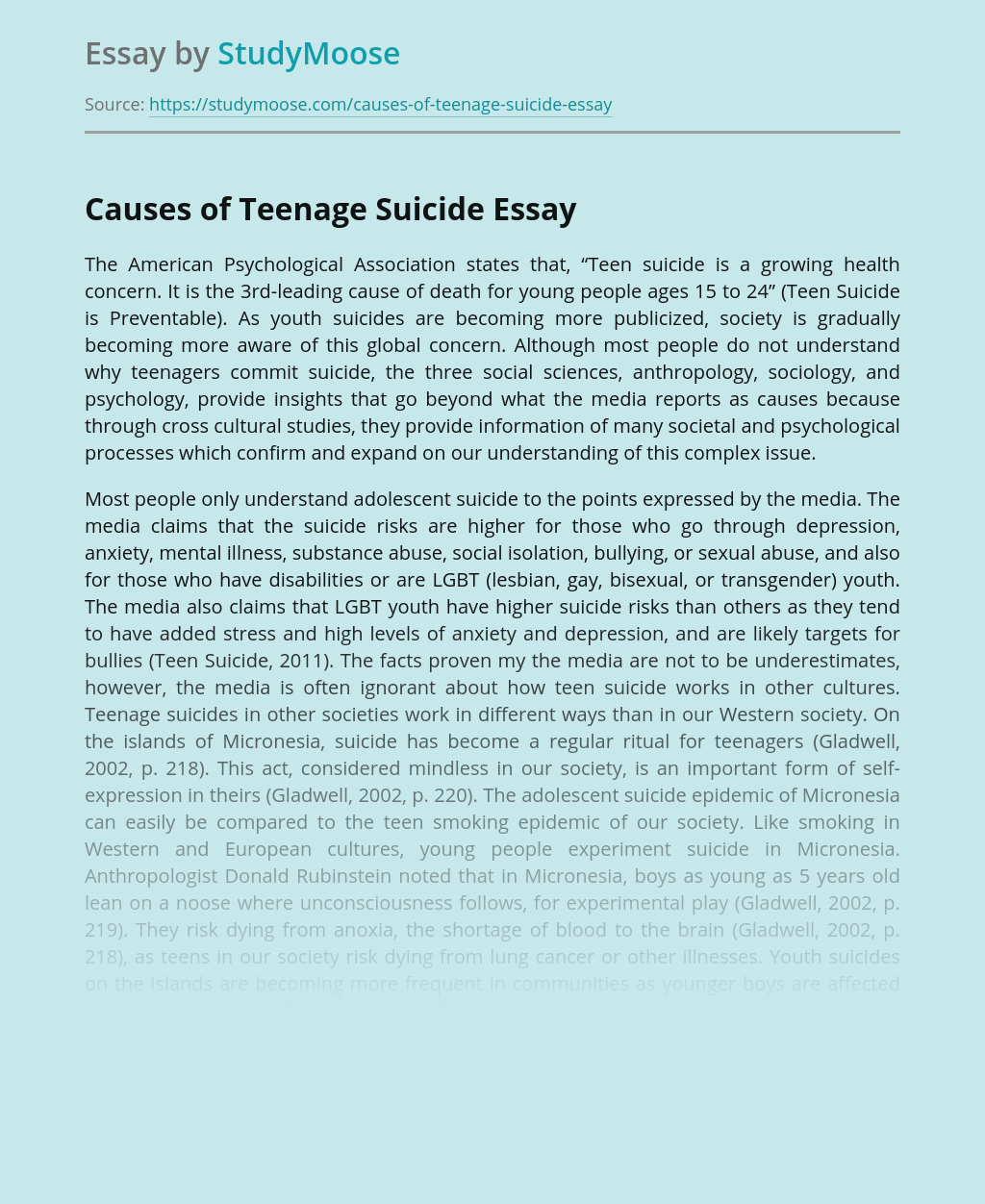 Don’t waste time
Get a verified writer to help you with Causes of Teenage Suicide
Hire verified writer
$35.80 for a 2-page paper
Stay Safe, Stay Original