Causes of Parallel Economy in India

There are several factors responsible for the emergence – of parallel economy. It would be relevant to discuss those factors so that a correct understanding about the genesis, growth and expansion of black money can be made. The principal factors are: 1.Rigid and Complicated tax & high tax rates implemented by the government- High tax rates and defective tax structure have also been responsible for the existence of black money to a large extent. Take for instance direct taxation.

Till recently the tax on income and on wealth was very high to invite evasion.

Don't use plagiarized sources.
Get Your Custom Essay on Causes of Parallel Economy in India Just from $13,9/Page

The marginal rate of income tax was as high as 75 per cent. And when it was combined with the tax on wealth, it was still higher. The corporate tax rate too was very high. In these circumstances the temptation / gain from tax evasion was substantial. 2.Quantitative and qualitative Controls and licensing system- The system of controls, permits, quotas and licenses which are associated with misdistributions of the commodities in short supply results in the generation of black money.

Since considerable discretionary powers lay in the hands of those who administered controls.

4.Hawala market as the main cause of black money generation- It is very well known that the international smugglers or the traders in other illicit trade cannot complete their monetary transactions through any nationalized or other private legal banks in India. Also, the amount of money in which the drugs and other weapons are imported or exported is quite large, usually in billions. 5.Transactions is real estate property- Since the sale of property on lease hold is permitted by the government only at a payment of certain amount of premium to it, the lessee generally completes this transaction through the power of attorney so that they escape from paying the premium which is fixed on the basis of the difference between the current market price and the price fixed by the government.

6.Inflation – Both a Cause and Consequence of Black Money- During inflation there is a general rise in the consumer price index or simply the cost of living of the people. As such, the workers and the various labors in the production process demand a rise in their wages to meet the rise in expenditure. This lead to increase in the cost of production of the products. They try to meet this increased cost of production by increasing the profits margin through sales price. 7.Deterioration of the Quality and Morality of the General Masses- The objective of the business is generally profit maximization and that of government is social justice and quality that goes against each other.

But it seems that both have joined hands to maximize their own profits at the stake of the common people. Bribing the government officials and letting them earn some commissions on the foreign export and import by urging them to reduce the customs duties and simplify the procedure of documentation are some of the common phenomenon in our daily life. 8.Donation to Political Parties- Ever since the Government decided to ban donations to political parties in 1968; it prompted businessmen to fund political parties, especially the ruling party, with the help of black money. Ostensibly, this decision was taken to reduce the influence of big business on the electoral process, but in practice what happened was precisely the opposite.

Businessmen everywhere have by now learnt that they should pay a certain charge out of the black money to the coffers of political parties, resulting, relaxation of various controls, permitting business houses to enter areas reserved for the public sector, putting a large number of banned items on the Open General License list etc. 9.The Political Instability Witnessed in the Country- In various states widespread horse-trading of the MLAs at the state levels and MPs at the Central level. In this process of buying political support, black money plays a crucial role. Consequently the determination of the ruling political party to curb black money has become very weak. As a consequence, businessmen feel they have an unfettered license to spin black money, pay a small part to the political parties as donations and then enjoy the rest the way they like.

Unless the link between black money and political power is broken, there is no hope of controlling the generation of black money or its link with crime. 10.Ineffective Enforcement of Tax Laws- Whereas the Government has an armory of tax laws pertaining to income tax, sales tax, stamp duties, excise duty etc., their enforcement is very weak due to widespread corruption in these departments. . The high rates of these taxes induce businessmen to avoid recording of these transactions. This evasion largely goes unchecked and thus sets in a chain reaction for the generation of black money at the wholesale, retail as well as production levels. 11.Generation of Black Money in the Public Sector- Every successive five-year plan is planned for a larger size of investment in the public sector.

Since the ministers are not sure of their tenure and in a majority of cases, the tenure is very short, the principle ‘Make hey while the sun shines’ is adopted by most of them. The larger numbers of scandals that are unearthed by the Opposition only support the contention that huge investment in the public sector is a big potential source for black money generation. In this process, bureaucrats act as brokers for political leaders and thus the nexus between business, bureaucracy and politicians promotes the generation of black money. 13.Ceiling on Depreciation and Other Business Expenses- Government has imposed restriction. It has also circumscribed expenses on advertisement, entertainment, guest houses, and payment of perquisites to directors.

The purpose of these restrictions is to protect the shareholders and consumers from the unscrupulous action of businessmen. But businessmen feel that these restrictions are unjustified. They take the maximum advantage of these provisions but do not like to part with the remaining part of by various clandestine devices; they convert it into black money and use it either for conspicuous production to satisfy the wants of the rich and elite sections of society. 14.Capitation Fees- Capitation fees are a very common term used in the context of admissions in big educational institutes and universities.

Capitation fees if another term used for the donations given to these universities for the purpose of seeking admissions when the students fails to secure the minimum cut off percentage required. Generally, the money rose by these colleges and institutes through these methods are not revealed to the income tax departments. They are also called the hidden income of these educational temples. Moreover, the amount of capitation fees for big in Small Scale institutes ranges in lakh and not just in thousands. 15.Unawareness of the Consumers’ Rights and Duties- Unawareness of the consumer’s rights and duties is also another cause for the generation of black money.

For example, the consumers fail to take a proper invoice from the shopkeepers so as to evade the tax to be paid on the purchase of those goods. There are more of such instances where the shopkeeper too fools the consumers. Sometimes, they charge more that mentioned as MRP on the packet. They even paste false stickers on the packets to hide the real value of the good. The extra money charged above the MRP is kept by them as black money. They do not pay taxes in such income. 16.Donations to Charitable and Temple’s Trusts- Donations to charitable and temples trusts are another source of black income.

There are various issues related to the income of these trusts. It is generally the ignorance of devotees that prompt such a large amount of donations to these temples. 17.Paying Bribes- Paying bribes to the government officials for various purposes has become very common in modern times. Paying bribes for obtaining legal sanctions for the illegal immovable property, paying bribes to the traffic constables and others on the violation of the rules and norms etc. are some of the examples of our malicious acts. It is we that prompt and encourage these public servants to accept bribes from the public and exploit them.

Causes of Parallel Economy in India. (2016, May 12). Retrieved from https://studymoose.com/causes-of-parallel-economy-in-india-essay 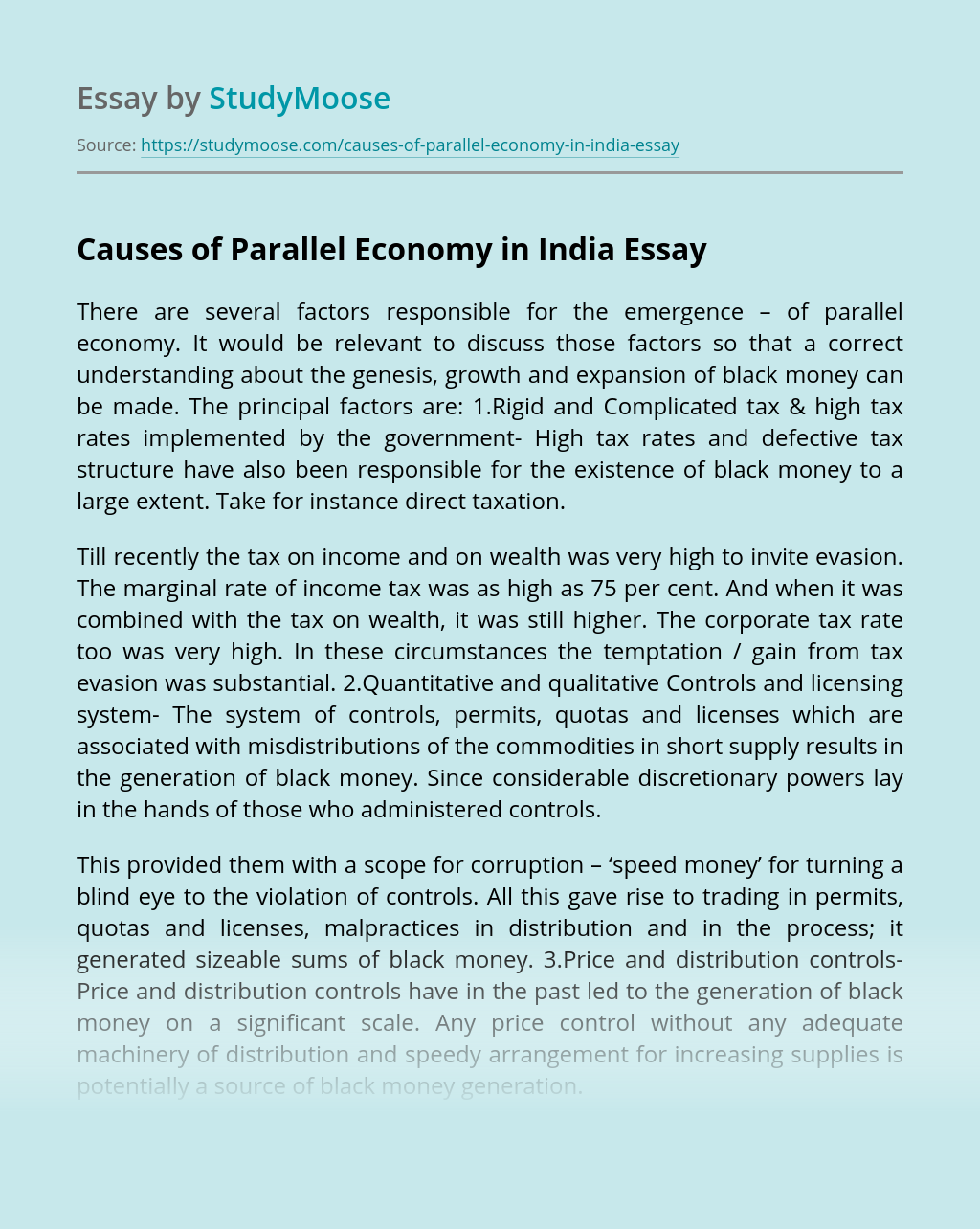 Legal and Financial Aspects Influencing a Start Up Business

GST is a comprehensive tax on manufacture, sale and consumption of goods and services at a national level and aimed to remove the cascading effect of tax, standardise the procedural aspect and create a single, unified Indian market to strengthen the economy.  Its effective implementation would change the tax administration and the manner of conducting...

Get Essay
Tax Planing - nature and forms of Business, Sec 10A of income Tax Act of 1961

Tax Planning is an exercise undertaken to minimize tax liability through the best use of all available allowances, deductions, exclusions, exemptions, etc.. to reduce income and/or capital gains. Tax planning can be defined as an arrangement of one’s financial and business affairs by taking legitimately in full benefit of all deductions, exemptions. allowances and rebates...

1. In what ways can Susan Collyns facilitate the success of CPK? – repurshasing company shares through debt financing, since the price of the shares declined by 10%. The view is that a strong balance sheet would maintain the borrowing ability needed to support CPK’s expected growth. – increasing international franchises and expand the agreement...