Many officials are motivated to participate in corrupt behavior because of the inherently selfish desire to have an unfair advantage over their peers. Through bribery, extortion, embezzlement, nepotism and other means, corruption can help dishonest people get ahead while the public pays the price. A corrupted politician may seek to sway a person’s opinions, actions, or decisions, reduce fees collected, speed up government grants, or change outcomes of legal processes. Through corruption, people seeking an unfair advantage may pay courts to vote in their favor or, as with police, customs units, and tax collectors, to disregard a penalty.

Bribery may be paid to allow for otherwise unacceptable building and zoning permits, to sway school exam results or allow acceptance by an unqualified student into a school system. People in the private sector may pay off politicians so that they dismiss rules and regulations to protect employees in the workforce. Corruption motivated by an unfair advantage may also occur in immigration, passport and visa offices in which unqualified individuals may be allowed an unfair advantage to obtain these important documents, at the expense of others.

In order to obtain an unfair advantage, governments and government officials may apply any number of methods to abuse their power over the citizens. First, a politician may apply diplomatic, political, or financial pressure, for example trade embargoes. However such pressures may also work to effectively bully vulnerable citizens. Also, many countries are the recipients of development aid, which might cause politicians who seek an unfair advantage to earmark this funding towards their particular cause.

The threat of reduced foreign aid, defense ties, arm deals, and gifts may help politicians to obtain an unfair advantage through corruption.

Thomas Hobbes, the great political philosopher, once said, “A man’s conscience and his judgment is the same thing; and as the judgment, so also the conscience, may be erroneous.” This idea that individuals cannot always rely on a working inner moral compass alone to guide them to virtue is at the heart of the next motivating factor for participating in corrupt behavior.

When the legal agencies do not impose sanctions on parliamentarians and other government officials who have violated their public duties there is a lack of punitive measure for corrupt behavior. This is the case, for example when judges are in the pay of the ruling party or there are too few police officers to enforce the law. When there are not punitive measures to assure transparency, monitoring, and accountability through a working justice system, some people will participate in corrupt behavior simply because they can get away with it. Politicians and other individuals require a legal, monitoring system to assure that corruption will not occur in the planning and execution of public sector budgets. Social and internal control mechanisms are required for civil society and autonomous state auditing agencies. Without them or with only weak enforcement measures, people in
power are more likely to embezzle money from the national budget, sway votes or participate in other actions that will result in personal gain at the public’s expense.

Transparency describes when there is free access by citizens to public information. When the rules, procedures, and objectives of the government are not available to the public, there is not budgetary and administrative oversight to balance the power of government officials, transparency is lacking and corruption can be bred. Without oversight and transparency of budget and rules, national resources may be plundered and power may be abused in favor of the corrupt official only. Further, when there are not public sector mechanisms that channel social preferences and specific complaints of the population to the agencies involved in those complaints, people of power will not serve their purpose of representing the populace, but have free reign to do as they please in the public sector.

Bad incentives, such as clerks not earning a living wage or not having job security might also encourage corrupt behavior such as supplementing income with bribes. Some people who do not have an incentive to perform their official duties, but actually pay for their jobs with the understanding that they will make money through bribes. A lack of incentive also results when positions of power are granted as a result of favoritism and nepotism (See unit 1). Making people resist hard work.

Incentives also come into the picture when salaries are so low that people cannot meet the basic living standards for food and housing. As a result, people will often take other jobs that cause absenteeism of public officials, and often increase the demand by government officials for bribes and other paybacks in order to supply the public services.

Problems with the law: Lawless and Over Regulated Governments Corruption can also be caused when there is excessive control and a sort of monopoly of power. In these circumstances, there again is not a level playing field, and decisions will always be made at the advantage of the group or person who dominates political control. As a result, ordinary citizen rights are lost and public resources are often plundered for the personal gain of the public officials. Poverty or scarcity of goods may also push people to live outside the law.

Finally, corruption occurs when government officials resist government policies and programs. Introducing policies that allow for greater oversight would help to assure that power were balanced and no one person would be making all of the political decisions. When politicians resist this change they prevent political and cultural progress for their country, prohibit civic interests from being met, and allow the pattern of corruption to flourish.

Dysfunctional Systems as a Cause for Corruption

Instability in government may also catapult a nation and its leaders towards corruption. Among them, war, ethnic or religious conflict, economic hardship, and social inequalities may instigate corruption. Any circumstance that threatens a nation or its people either through identity or establishment may diminish the good governance practices of a nation. Even in less difficult times, the institutions and policies of government may undermine how well the government carries out its work. When institutions and policies are weak, individuals tend to take advantage of them. Therefore, poor governments are a product of sick institutions, or institutions that function poorly because of inadequate resources or bad policies and procedures.

As stated earlier, good governance refers to the provision of services that are responsive to citizen needs. When government services are not provided to citizens, either because they were deemed unnecessary, services providers demanded bribes or were lazy, or the services are provided in theory but are not readily available in practice without a bribe, people will aim to have their needs met illegally or unofficially. Likewise, when financial systems are outdated, they are more corruptible.
System-Wide Allowances for Corrupt Behavior:
Government may allow system wide corruption to spread by not institutionalizing and enforcing prevention mechanisms. For example:

Overly complex procedures for obtaining public services allow government to covet the services to only the well-informed or well-connected elite, and not allowing the system to work for the poor.

Lack of internal systems to assure relative transparency, monitoring and accountability in the design and execution of public policies.

Lack of employee participation in and knowledge of the public institution’s decisionmaking criteria.

Absence of results based management in public service delivery.

An ineffective judicial sector (police, prosecutors, officers, and the judiciary.)

Problems in governance occur when a government is not only corrupt, but also when it is inefficient, unresponsive, or secretive. Essentially, when a government is ineffectual, it is considered to be corrupt. As this unit explained, corruption is fundamentally caused by low wages, poor incentive structures and inefficient systems. In addition, it is also caused by the desire for an unfair advantage, and the knowledge that one will not be caught or punished for corrupt behavior. Corruption is not just about ethics. It is also about how the government is set up and managed. Parliament and parliamentarians improve the way government works so that corrupt behavior is punishable and opportunities for corruption are limited through the laws. In order to fully rectify corruption in a society, it must first be thoroughly diagnosed. Unit three shows methods for diagnosing, measuring, and interpreting data on corruption. As the units thereafter will explain, this step will help to make focused and measurable changes and improvements to corruption when those mechanisms are enacted.

Causes of Corruption. (2016, May 30). Retrieved from https://studymoose.com/causes-of-corruption-essay 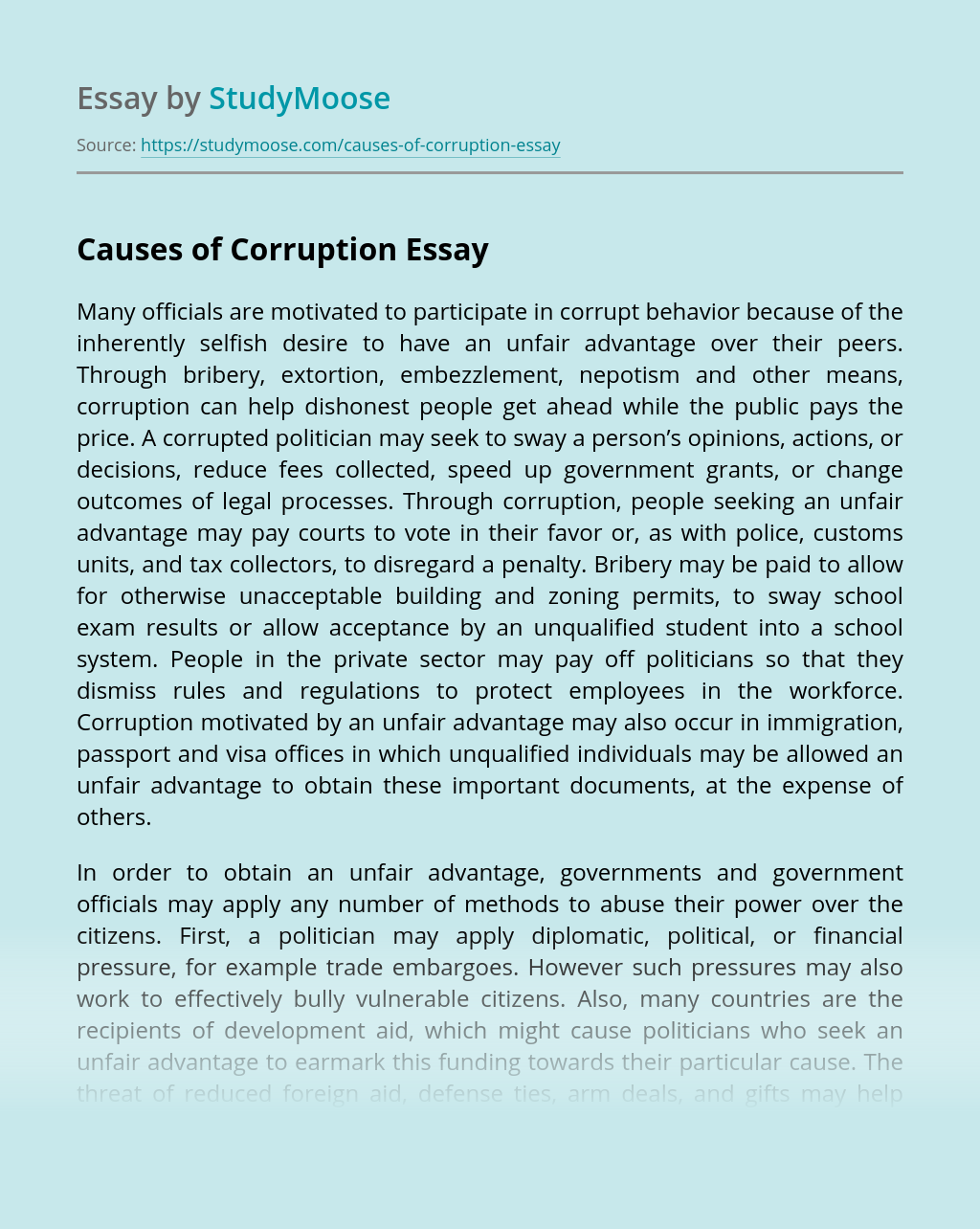 Causes of corruption & its remedies

Rate this post An act done with intent to give some advantage inconsistent with official duty and the rights of others. It includes bribery, but is more comprehensive; because an act may be corruptly done, though the advantage to be derived from it be not offered by another. Sometimes corruption is understood as something against...

Rate this post “Teenage pregnancy is defined as a teenage girl, usually within the ages of 13-19, becoming pregnant” (Fact Sheet). The term in everyday speech usually refers to girls who have not reached legal adulthood, which varies across the world, who become pregnant. Teen pregnancy is less often planned and hence less regulated by...

Rate this post Corruption is a word with many meanings and each of them depends on the specific social and political context in which it is used (Brown, 2006). Nowadays this phenomena is closely connected with political world and business sphere. In developing countries mainly economic field is attached by this problem. In the 1990s...

Should Abortion Be Illegal or Legal

Rate this post Whether or not abortion should be illegal or not is a very controversial issue. Abortion is a very personal matter and people have many different opinions about it. Reasons for or against an abortion could be rape, money issues, religious views, and or young motherhood. An argument for the prolife side would...

Rate this post Other times of birth control which are a little bit more complexes are the IUD anther more percent type of birth control is getting there tubes tied. There are other things that women can do if they do become pregnant and they choose they do not want to have a child at...

Rate this post In this paper I will discuss how Planned Parenthood has improve the lives of many women by providing a safety net for women’s health, being economically friendly, and promoting a decrease in the social stigma surrounding abortion. Safety Many women are victims of cohesion or abuse, maybe they feel pressure from their...