Causes, Effects and Solution to Boko-Haram and Kidnapping in Nigeria

Turn in your highest-quality paper
Get a qualified writer to help you with
“ Causes, Effects and Solution to Boko-Haram and Kidnapping in Nigeria ”
Get high-quality paper
NEW! AI matching with writer

You argue that the issue is not just Islam. What is it? I think the African is the best person to know that term. What the Africans discovered is that people will use every reason everywhere to sort out their ends. I said this still is not Islam, I said it is not religious. I said it is not political, ethnic and tribal.

I said it is a new kind of war that the world knows. Some people in the Northern part of Nigeria will still tell you that Islam had been in the country up to 600 years before Usman Dan Fodio came in.

The religion of Nigerians was not killing anybody. If you like, let’s go to the archives and get the letters written by Shehu El-Kanemi, who was an Islamic scholar, addressed to Usman Dan Fodio in 1907 on the issue of jihad. The Boko Haram crisis, according to you, has a long history.

What is it? There is nothing like Boko Haram. The Boko Haram thing was invented by the Western press after the explosion of Maiduguri. Boko Haram is just one out of the many demands of nothing less than 26 militant groups operating in the northern part of the country.

And what those people did was that when the title Boko Haram was convenient for them, they used it to further their cause. It was Osama bin Laden that created a new structure of modern terrorism. That is why every sensible nation of the world has separated Islam from Islamism. Nigerians are advocating for amnesty. What is your position on it? Nigerians are advocating for amnesty because they are terrified. One of the things government has refused is that there is a psychology of terror.

When the psychology of Boko Haram begins to succeed, palpable fear will overcome the opulace. When they begin to panic, a drowning man will die faster. The truth is that amnesty is a stupid idea. It is like somebody who has yellow fever and you are treating him for malaria fever, you will make it worse and the patient will die. Amnesty may work for disenfranchisement; it may work for political grievances; it may work for people who have anything apart from ideological basis for terror. The Western world is inexperienced in Africa that is why they ascribed the cause of terrorism to poverty. It is ideology that is causing it. Let me give you an example.

The son of one of the wealthiest Muslims in this country planted a bomb inside his underwear and attempted to blow up an American plane with lots of people therein. Was that poverty? The truth is that it is radicalization that makes people to use your own convenient doctrine to make a brother kill his brothers. Nigeria is at war. Everywhere in the world where this thing is happening war has been declared, a new kind of war. And the whole country must be galvanised to fight this new kind of war. It is not the old kind of war where soldiers would wear uniform and shoot.

It is a new kind of war which Nigerians refuse to understand. Therefore, there is trouble as long as people in high places continue to be stubborn and refuse to listen to sound counsel. There are people in high places who are members of Boko Haram in Nigeria. There are people who have infiltrated the ranks of Boko Haram. In Maiduguri, a Muslim is afraid of his fellow Muslim because he doesn’t know whether or not he is a Boko Haram member. In Kano, when Boko Haram wanted to use one man’s car to go and bomb, he refused but he was killed.

When they killed him, the Federal Government didn’t compensate that man’s family. It is commonsense that when you want to avert disaster and calamity that the children of the man should not suffer because the deceased was a national hero. The point now is that what amnesty are you giving to people whose modus operandi is to infiltrate your government? They will pretend to take amnesty; they’ll never stop in pursuit of their objectives. Do you think we need UN intervention force to tackle the crisis? We can contain this problem by working with other countries without selling Nigerians to foreigners.

My emphasis is that there are some countries in the world whose position is that the best way to handle the global problem is to divert it from Afghanistan to Africa. These are thinkers; they may even come to Nigeria and pretend to be helping us. But what they would do is to tackle it in Afghanistan and all the places where all these people are in the entire world and divert the problem to the country of people who are not perceptive. For 25 years, there was no government in Somalia. Chaos everywhere. Does any country of the world care what is going on in Somalia?

If they care so much the situation in Somalia would not last for twenty five years. If we are going to work with the United Nations to solve the problem, we will do so with our eyes wide open, knowing that its objective is not to come and turn Nigeria into a battleground. But we want to make sure that Nigeria is a leading country in Africa with attendant stability, peace, freedom to move around in any part of the country, freedom to pick anything you want and freedom to prosper. Boko Haram claimed that injustice has been done in the killing of its leader, Mohammed Yusuf.

Do you dispute this? Those who entertained them have mental failure. I have worked in this field for more than 14 years, but 12 years ago I began to warn Nigeria this thing is coming. How did I begin to warn Nigerians? Nigerians don’t like statistics, but no matter how conservative I am, nothing less than 650,000 Christians all over the Northern Nigeria have been struck without anybody paying them anything, without any remuneration and government’s attention. When Muhammed Yussuf moved into Maiduguri, he began to create problems.

I have a report from the Christian Association of Nigeria (CAN) that there was going to be an explosion in Maiduguri. Already, his boys had taken over Maiduguri. They had different colour of coats. They had their own army and police. They had different kinds of colour coats they were wearing in Maiduguri. I am in Lagos here; I knew all these and I don’t have any budget behind me. When I got to Maiduguri, I found that we had to care for both Christians and Moslems who were victims of the explosion. So when Yusuf’s own happened, his father-in-law was paid N100 million.

Boko Haram killed people. I know a woman whose husband was beheaded. Families of those who were killed were never paid a kobo. You took N100 million of Nigerian money to pay Yusuf’s family. He was arrested earlier on in Maiduguri, orders from the above asked for him to be released. It is not as if people in government didn’t know who acted behind the scene to facilitate his release. There are injustices all over Nigeria. The army arrested Yusuf alive, handed him over to the police. Who gave instruction for the termination of his life?

Why would they capture him alive, hand him over to the police and somebody would just go and kill him? Who assassinated him? Those who don’t want their names to be published as the backers of all these troubles gave the instruction for the assassination of Yusuf. Let them go and do their thorough investigation. Why do you think we have intelligence failure? Because the intelligence security systems are riddled with moles! We don’t have the courage to institute the new thing based on research and proper intelligence to fish out all Boko Haram members in higher places and their sympathizers.

What should Jonathan do to prevent further bloodbath in the North? It is not in the North. He needs to understand that Nigeria is at war. The sovereignty of Nigeria is at war. He doesn’t have proper understanding of the problems of the country. Let me tell you, Nigeria is in a state of war. Jonathan is a war-time President. Would you give Borno elders who claim the Boko Haram are not ghosts the benefit of the doubt? Why? Borno elders should go back to archives and stop betraying their heritage.

El-Kanemi would be ashamed of the Borno elders. He would be ashamed of many of the Islamic clerics in Borno. Go and read the writings of El-Kanemi. He was a better Nigerian than some of those elders who are there today. They should be thoroughly ashamed. There is a lot going on behind the scene in Borno. The former Shehu of Borno and the former Sultan never killed anybody. It was the safest part of the country before. The current leaders betrayed their inheritance. Borno is not the epicentre of Boko Haram in Nigeria, it’s just a victim.

Causes, Effects and Solution to Boko-Haram and Kidnapping in Nigeria. (2016, Nov 12). Retrieved from https://studymoose.com/causes-effects-and-solution-to-boko-haram-and-kidnapping-in-nigeria-essay 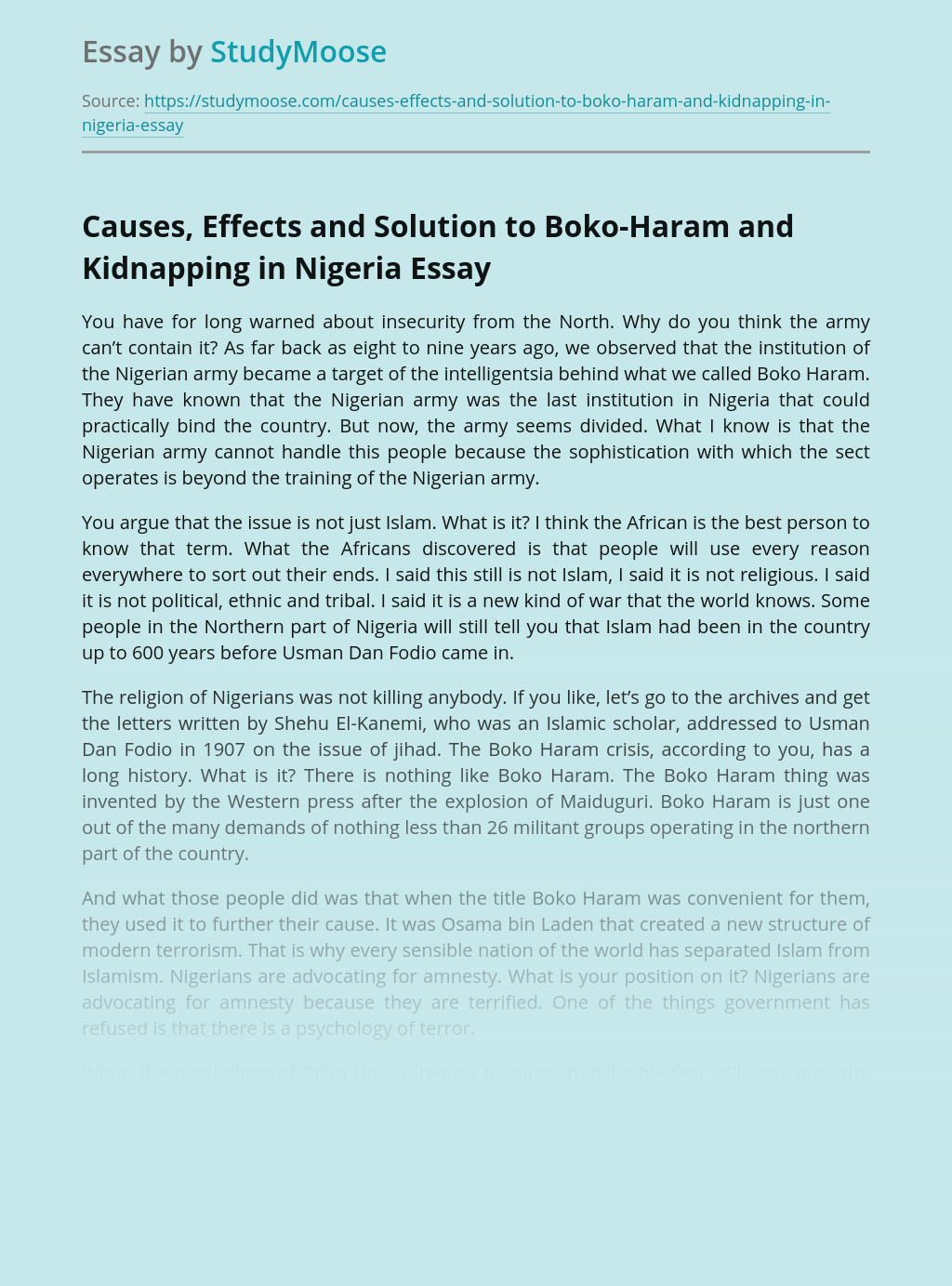 Turn in your highest-quality paper
Get a qualified writer to help you with
“ Causes, Effects and Solution to Boko-Haram and Kidnapping in Nigeria ”
Get high-quality paper
Helping students since 2015
Stay Safe, Stay Original