Causes and Effects of Pollution on Environment

The reason that pollution is a problem is that it causes harm to the environment. It affects animals. It affects the environment. Pollution has a very negative effect on wildlife has brought ruin to many ecosystems across the planet. Air pollution kills an estimated seven million people a year according to the World Health Organization.

It is assumed that pollution becomes more of a problem and leads to more deaths per year. There are many toxic pollutants in the air that have to lead to most areas of the world having unsafe air.

Don't use plagiarized sources. Get your custom essay on
“ Causes and Effects of Pollution on Environment ”
Get custom paper
NEW! smart matching with writer

There is also water pollution. According to the Natural Resource Defense council, there is only one percent of the freshwater in the world that is actually available to us. The pollution in the water has led to many problems for the fish. Microplastics are tiny plastics that found their way into water systems. Microplastics have been increasingly larger problem bodies if water because fish have been eating them.

The microplastics have caused many health problems for the fish. The microplastics are a result of the industrial runoff. Light pollution is another form of pollution it has been blamed for negative health problems and disrupting ecosystems There is also noise pollution. Noise pollution has been blamed for a negative impact on people and animals. Noise pollution is caused by machinery, vehicles and just people being loud. Many animals have been affected by an oil spill. Millions of animals can die in a single oil spill. According to the World Health Organization around ninety-one percent of the population live in areas where the population exceeds the guidelines recommended by the World Health Organization. The National Resource Defense council also says that about a third of water bodies are unfit for swimming, and fishing in.

Pollution is everywhere in the world but is heavily concentrated in certain parts of the world. According to the World Health Organization, eighty percent of urban areas are above their guidelines. In places that are heavily industrial, there is a more heavily concentrated amount of air pollution. Places like New York have a lower amount of air pollution than some other rural areas because they are more efficient than some other places across the world. Places like India have a much larger concentration of air pollution due to many factors such as they burn land down so they can begin to farm. In places such as India, they have dire effects from the harmful air. According to Air Visual, twenty-two of the top thirty polluted cities in the world are in India. CNN says that “Every single city included in the report in the Middle East and Africa exceeded WHO guidelines for PM2.5, as did 99% of cities in South Asia, 95% in Southeast Asia, and 89% in East Asia.” Heavily industrialized countries contribute a lot more to pollution and have much more toxic areas that are more environmentally friendly.

Pollution is believed to begin at the start of agriculture. People dispute this though and say that the start of pollution began at the start of the industrial revolution. The start of agriculture began seven to ten thousand years ago. The industrial revolution began around seventeen seventy-six in the united states. Everyone is affected by pollution, but certain groups and regions are more affected than others. The elderly are a lot more at risk for health problems than younger people. They also receive much more dangerous symptoms from it. Babies are also at high risk for health problems from air pollution. Unsafe water is also a big risk for people because they can catch many dangerous diseases or illnesses from the water. There are many groups that are trying to monitor and help prevent the effects of pollution. Millions of people have died from air pollution. They get diseases like heart diseases that kill them slowly over a long period of time.

The causes of pollution are humans. Humans are the biggest contributor to pollution. The industrialization has had a very negative effect on the environment. Cars and other vehicles have been massive contributors to pollution. Industrial waste has affected the quality of air, the quality of the water, and has contributed heavily to noise and light pollution. Microplastics are industrial waste that has a large effect on the ecosystems that it has entered. Most people see pollution as a large problem, but not everybody. Many people don’t believe that it has a negative effect on the planet. There are also people who are who deny that they exist at all. There are people who deny its existence because of industries that have a very negative effect on the environment. A historical example would be the great smog of nineteen fifty-one. This event leads to as many as four thousand people dying. This event leads to multiple pieces of legislation being passed that would focus on being a more environmentally friendly nation. There have also been many oil spills that have lead to legislation that focused on preventing such future incidents.

There are many barriers that prevent the decrease in pollution across the world. One that is human is that many industries currently have no viable alternative for reducing their carbon footprint. Another barrier is vehicles because people need to get to work. Barriers that prevent humans are the cost to reduce pollution. Another one is that many people in certain industries will lose their jobs. Another is that many places need certain things that contribute a lot to pollution. One big thing that stops many people from trying to reduce their pollution is that many other countries currently don’t consider it a big priority even though they contribute a lot more pollution than other countries. People that deny that pollution is a problem are a barrier to the problem because they help prevent anything being done about the problem. I think both sides have a good case, but I think that pollution being a danger is a better case.

Many people have offered options on what they can be changed to fix the problem of pollution. People have suggested that they eliminate the use of non-reusable energy. A lot of people oppose this because many people would lose their jobs. They have agreements between governments that would see the elimination of pollution. Some other suggestions are that people reduce some of their habits. One thing that is suggested is shorter shower times, and be less wasteful of energy inside the household. People have also suggested that they drive less because cars have a large effect on the environment. They have suggested they they reduce the amount of water you use. One thing that was suggested was that people could reduce pollution by making sure that their tires have enough air because have not enough air makes the car less environmentally friendly. One thing that is suggested often is moving to nuclear energy but this is often dismissed because of the stigma associated with nuclear energy. I think there are many valid options to reduce our carbon footprint, but I think many will be ignored in the near future. I think only a few suggestions intake affect in the near future.

Given what I have learned about pollution, I think that there are many options to take to reduce the amount of pollution given off in the atmosphere. I think that the best solution is that people become far more educated about how negative the effects can get. I think there is a need for drastic changes to be made like removing the stigma from nuclear energy and becoming more environmentally friendly. I think that pollution being a problem is large because of humans and can be dealt with many lifestyle changes and reusable energy.

Causes and Effects of Pollution on Environment. (2021, Mar 19). Retrieved from https://studymoose.com/causes-and-effects-of-pollution-on-environment-essay 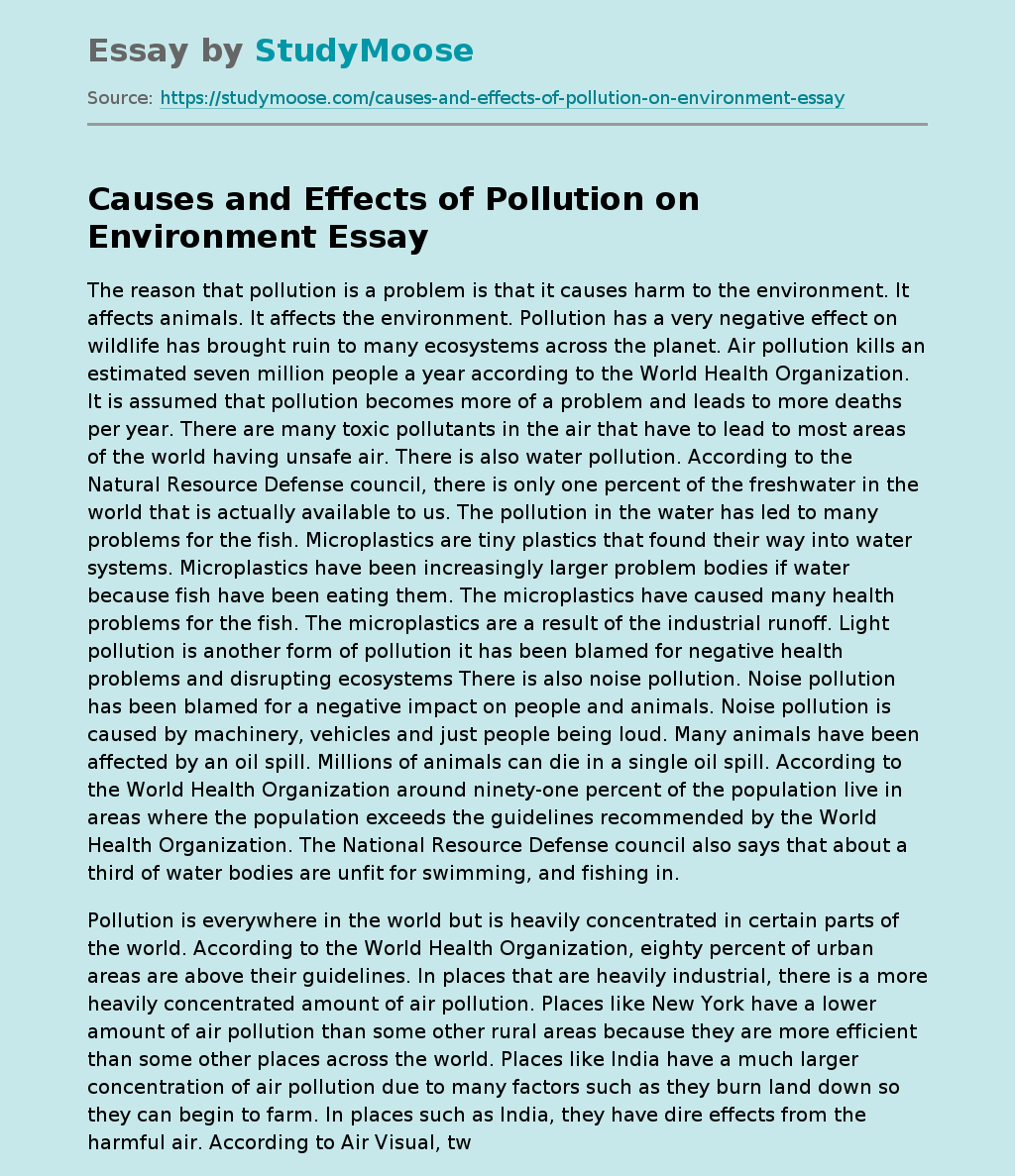