Cause and Effect: Smoking Weed

We’ve all listen to our parents tell us what happens to people who do drugs. Their brain melts, their teeth rot, and the live in a dumpster eating thrown out pizza crust. Obviously none of that sounds like the American dream to most people. With all this campaigning against drugs, an alarming 17% of 10th graders have smoked marijuana in the past month, according to http://www. drugabuse. gov. There is a lot of debate as to whether or not marijuana is actually bad for you.

Turn in your highest-quality paper
Get a qualified writer to help you with
“ Cause and Effect: Smoking Weed ”
Get high-quality paper
NEW! AI matching with writer

Some people think that it’s harmless and is actually good for you.

With the legalization of recreational marijuana in Washington and Colorado, it only gives them another reason to stand by their claim. What really happens to those 15 and 16 year olds who decide to put marijuana in their body? Most people do drugs either because they think it’s cool, their friends peer pressure them into it, or because they have a sad life and need something that will make them forget about their worries, much like alcohol does.

If one thing’s for certain, it’s that marijuana doesn’t make anybody’s life better.

Science has proven that marijuana has tons of negative physical and mental effects. According to www. webmd. com, marijuana causes paranoia, distorted sense of time, anxiety and depression. A paranoid, depressed person who shows up for work late every day and puts no effort into his work is more than likely going to lose his job. This is where the drug user has two options, he could either wake up and get some help or he could become even more dependent on drugs to help him forget about his problems.

Most choose to become even more dependent on drugs. When somebody really wants to get away from their problems, they might turn to other drugs like meth. This is the concept of a gateway drug, which is a drug that opens the door to other, often worse, drugs. Once somebody moves on to the crack cocaine or heroin it’s just about to rock bottom. Their brain eventually melts so much that it begins leaking out of their ears and the only thing they know how to do is do whatever it takes to get their hands on more drugs, even killing somebody else.

Drugs control their life and even if they got help and went to rehab, they would still have permanent damage and would still never be the person they were before. According to www. samafoundation. org/, drugs can permanently effect your perception of the world. If you do drugs before your brain is fully developed, your thoughts and perception of things can stick with you throughout your whole life. Basically, smoking marijuana can turn you into a depressed, paranoid, infertile zombie that will do anything for drugs.

Cause and Effect: Smoking Weed. (2016, Sep 08). Retrieved from https://studymoose.com/cause-and-effect-smoking-weed-essay 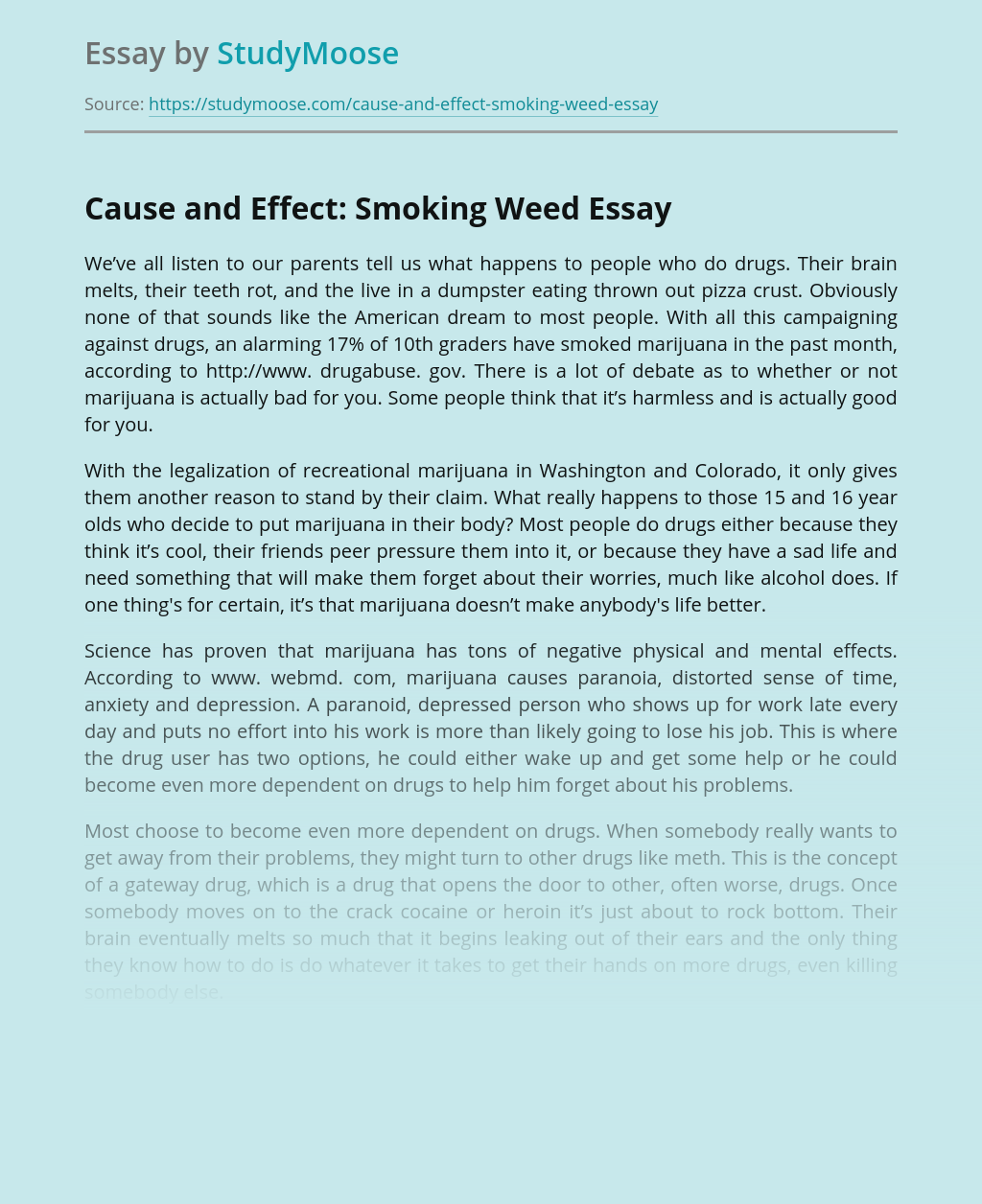 Turn in your highest-quality paper
Get a qualified writer to help you with
“ Cause and Effect: Smoking Weed ”
Get high-quality paper
Helping students since 2015
Stay Safe, Stay Original