Yossarian’s illness is confusing all the doctors because he was always just shy of having jaundice. He was still in the doctors’ care because since he didn’t quite have jaundice but still felt the pain, according to Yossarian, the doctors had no way of treating him. Later in the chapter we find out that Yossarian was simply pretending to be ill and he wasn’t really having any sickness at all. He was lying to the doctors and telling them that he felt pain in his liver so that they couldn’t release him from their care.

Don't use plagiarized sources. Get your custom essay on
“ “Catch-22” Novel Analysis ”
Get custom paper
NEW! smart matching with writer

Yossarian had done this so that he wouldn’t be discharged from the hospital and put back into doing dangerous and according to him, crazy missions. Unlike the truly wounded men of the other wards who would like to discharged so that they could go to war, Yossarian does not want to go fight and get killed and would rather stay in the comfort of the hospital bed.

Other than the ward he himself is staying in, Yossarian thinks that all the other wards in the hospital, and in the world, are all filled with crazy people that want to get killed, and so he fakes Jaundice so he wouldn’t have to face the war.

Since he was on bedrest in the hospital, Yossarian got the job of reading over and censoring the letters of the enlisted men that were to be sent to their loved ones. Yossarian had to do this job during the whole time he was being taken care of in the hospital and so he thought that the job was “monotonous” meaning that it was quite boring.

As time passed and the job got more boring, Yossarian decided to play a little game with the letters that he was censoring. The first thing he messed with were the articles, which were all the ‘a’s, ‘an’s, and the ‘the’s of all the letters so that he could make his job a little more interesting. Next, Yossarian decided to take away all the modifiers from the letter, which meant taking away all the adjectives and adverbs, making the words in the letter unreadable. After, he took away all the salutations and greetings from the letter so that it could not be determined who it was addressing and then when that got again too monotonous for him, he did the opposite, instead taking out everything except the salutations. The games that he had conducted made the letters all the more harder to read since Yossarian had been attacking the letters and censoring unnecessary things out of the letters. This leads later, to an investigation on who has been modifying the letters under several fake letters, and that is why the C.I.D. man was with the enlisted men and Yossarian in the hospital.

The Texan is an enlisted man that had arrived to the hospital from Texas who was educated but also believed in a patriotically traditional ways. The Texan would often talk to the enlisted men and talk their ears off with his own opinions while he was in the hospital. Due to his loud antics, the Texan had driven all other enlisted men, even Dunbar and Yossarian who were men that wanted to stay in the hospital and not go outside to fight had suddenly miraculously ‘recovered’ from their symptoms. The reason that the C.I.D. man was there at the hospital was as mentioned before, because Yossarian had been censoring the letters under many different fake aliases, changing his ‘name’ from one thing to another. Yossarian had been censoring the wrong things in order to make not be so boring, and not actually censoring the necessary classified military information. Due to this reason, the C.I.D. man had come down and came to investigate issue. While he was in the hospital, the man had come down with a sickness, more specifically pneumonia and he had caught it from the fighter captain. Since he had caught a cold and had to stay in the hospital, the C.I.D. man would have been the only man that had to stay with the Texan and his annoying antics in the ward.

Since the Texan had arrived, Captain Yossarian and Dunbar had found out, due to him always talking, that he was a very traditional man. Although he was educated, the Texan was from Texas, which is usually thought of as a state where the people are very patriotic and believe in more traditional ways of livelihood. The Texan himself, as revealed in the book, thinks lowly of people like whores, criminals, degenerate, atheists, etc. and believe that other people deserve to get more votes than the so called ‘bad people’ of the community, according to him. From this information, we can assume that the Texan might also have racist tendencies or he might even be just full on racist. Like I, as a reader has assumed this, Captain Yossarian and Dunbar has also seemed to have come to the same conclusion as I have. They accuse the Texan of murder of the ‘soldier in white’ because he was black and they believed that he was a racist. When they tell him that the ‘soldier in white’ is infact a black man, the Texan rebutts the saying that they don’t allow black people in the same ward as the white people. This tells the readers that the military back then, segregated white and black people, even in hospitals.

The ‘soldier in white’ was a man that was filed in the hospital a little after the Texan had arrived. His body was wrapped in thick plasters and gauze which is where he got the nickname from. All of his limbs were out of use due to the plaster, so his arms and legs were lifted in the air so he was left completely helpless. Due to this, he was forced to stay next to the Texan and therefore, couldn’t escape him despite possibly being annoyed just like all the other enlisted men had done. According to the book, the ‘soldier in white’ had been sneaked in the ward in the night by the Communist Sergeant. Another thing that the book had mentioned was that previously, there was an incident in the mess hall where a stove had malfunctioned and exploded, creating a fire and causing an accident in the hospital. The incident seemed to have been pretty serious as Yossarian describes remembering firemen making sure that the planes returning from a mission had not crashed into the fire. Given this information, it would make sense that the ‘soldier in white’ had been injured due to the previous fire seeing that he is wrapped in plasters, most likely from burn marks.

The men that are being treated at the hospital are not particularly worried about their lives, probably because the doctors and nurses have assured them that their wounds and illnesses are not serious enough to cause death. When the doctors give them this sort of information, the men would believe and would have no reason not to, until a leader of their own belief and faith comes in and tries to comfort them. A chaplain is a religious leader, something like a pastor, rabbi, or a leader of other beliefs, that are assigned to certain areas like a hospital and their job is to give assurance to the people that need their help. So when a chaplain would come to visit men who are in a hospital ward, their first instinct is to suspect that the doctors have lied to them and that they are really lying in their deathbeds. This belief has come around to them since it is a known fact that chaplains come to visit dying men so that they could confess their final sins to them before they were going to die. This is why, when the chaplain visited Yossarian, he wasn’t worried about dying because he knew that he didn’t really have an illness since he knows that he was only pretending to have Jaundice. However, different from Yossarian, the other men really have their respective diseases and would get scared and be uncomfortable at a chaplain suddenly appearing by their hospital beds.

Yossarian is an individualist. He is someone that goes against the current of everyone else in the military and thinks for himself. Different from everyone else, Yossarian does not want to return to duty and instead wants to stay in the comfort of the hospital where he is fed and taken care of and everything. He simply does not understand why all the other men in the other wards are so eager to serve and protect their country, when it would involve killing others and getting injured themselves as well. Much like the current people today, Yossarian doesn’t want to kill anyone at any given time and in his opinion, he labels the other men as crazy for wanting to do so. When the Chaplain mentioned to Yossarian that he plans on visiting the other wards, he worries for the Chaplain because as he said before, he believes that they are crazy. Not only does Yossarian think that the other wards in the hospital are crazy but he thinks that the only sane ward in the entire world is his own which he shares with other people who agree with him like Dunbar. So, when he warns the Chaplain about the crazy wards, the people in those so called ‘crazy wards’ would argue that Captain Yossarian, Dunbar, and his ward are the real lunatics.

In the line of duty, Yossarian plays the role of a bombardier which is someone that lays over an open window in a plane and looks down at people firing bullets and bombs at him while he waits to drop a bomb down to them. This is the same for every bombardier in the line of duty and the same goes for Yossarian as well, he is not someone is special in this case. The men on their opposing side are also not choosing to kill these particular bombardiers, but instead targeting them as a whole. Yossarian was not a singular target that they wanted to kill, he is just a part of their rival opposing side. This is the reason that he does not want to go back to his missions and his duty, because frankly, Yossarian is a coward. He is a coward Captain that is not willing to risk his life in order to protect his country. Yossarian does not only believe that the opposing men are trying to kill him, but he also suspects his own superiors of trying to kill him because of all the missions that they are forcing him to do. So, in conclusion, no. Nobody is really trying to kill Yossarian, not technically, although he thinks they are trying to kill him in his own head. 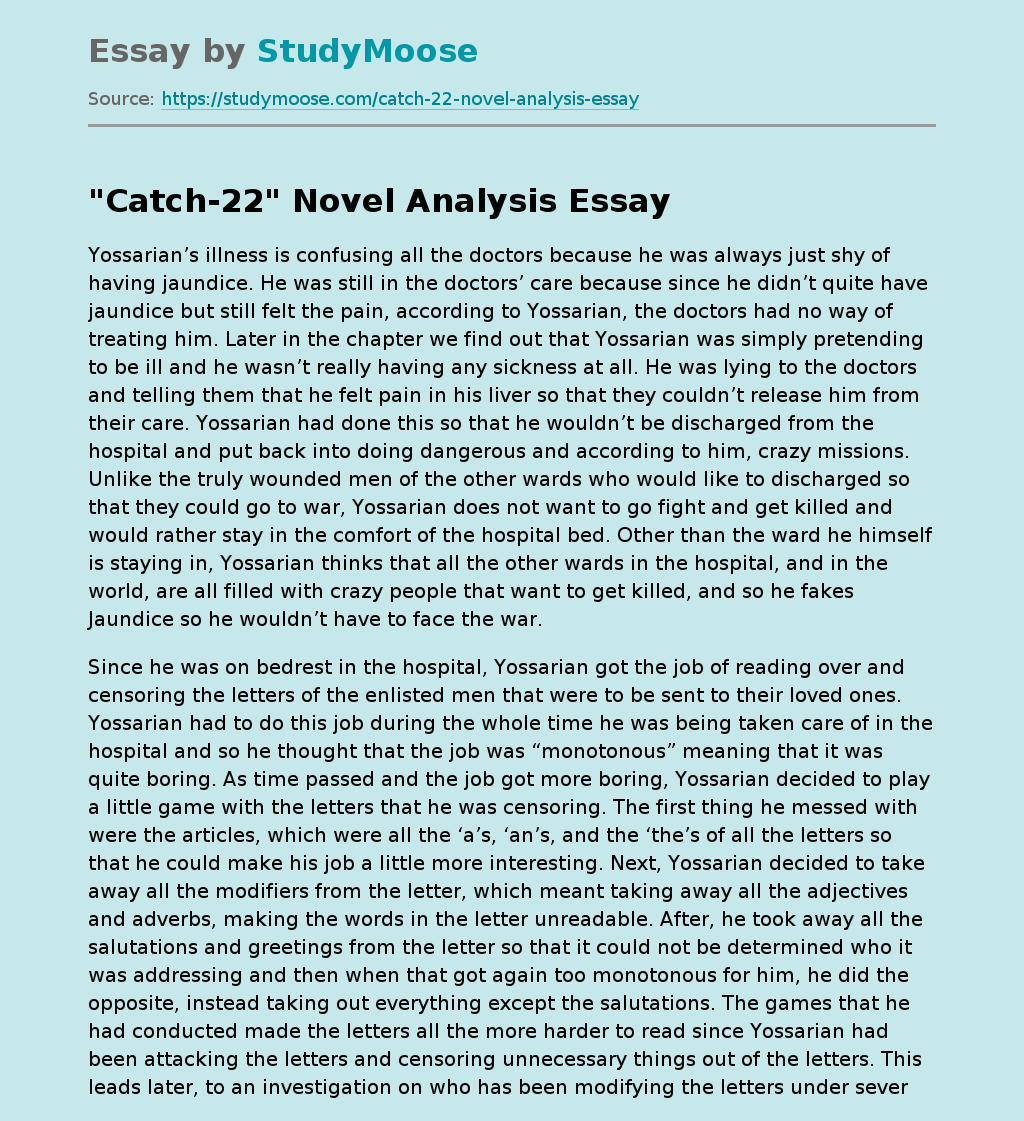