Don't use plagiarized sources. Get your custom essay on
“ Cat Dissection Structures ”
Get custom paper
NEW! smart matching with writer

• The width of the arteries. The arteries constantly change in width as blood flows through them.

The narrower the arteries, the higher the blood pressure. Renin helps control narrowing of the arteries. Failing kidneys often make too much renin. This raises blood pressure. If your blood pressure is high, your heart is working harder than normal to pump blood through your body. High blood pressure (also called hypertension) caused by a breakdown in these functions is common in people with kidney failure.

It is also a complication, a secondary condition caused by kidney failure. • RBC production? o The urinary system controls red blood cell production by secreting the hormone erythropoietin. . What structures enter or exit at the hilum of the kidney? • Ureters, renal blood vessels, lymphatics, and nerves enter and exit at the hilum

Know the anatomy of the kidney so that you could recognize the following parts from a description or on a diagram: capsule, hilum, renal artery, renal vein, ureter, cortex, medulla, papillae, renal columns, minor and major calyces, renal pelvis.

The Kidney is bean-shaped and located in the lumbar region of the body. The kidney is described as being Retroperitoneal-that is, it is located between the dorsal body wall nd the parietal peritoneum. 1. An average human kidney weighs about 5 ounces. 2. Sitting on top of each kidney is a single adrenal gland that essentially has no influence on the kidney. B. The Renal Hilum-vertical cleft on the medial surface of the kidney, that leads into an internal space within the kidney known as the Renal Sinus. 1. The ureter, the renal blood vessels, lymphatics and nerves all join each other at the hilum and occupy the renal sinus. C. There are Three Layers of Support Tissue Surrounding each kidney. The layers are: 1.

The Fibrous Capsule-a capsule-like layer that prevents infections in surrounding regions from spreading to the kidney. 2. The Perirenal Fat Capsule-a thick layer of adipose tissue that attaches the kidney to the posterior body wall and cushions it against blows. 3. The Renal Fascia-an outer layer of fibrous connective tissue that anchors the kidney and adrenal glands to surrounding tissues.  Three Distinct Internal Segments in the Human Kidney: 1. The Renal Cortex-light colored, superficial region of the kidney. This area has a granular appearance. . The Renal Medulla-a dark red or brown colored region in the kidney. The medulla contains cone-shaped areas known as the Medullary or Renal Pyramids. a. The base of each pyramid faces towards the cortex and the apex (Papilla) points internally. b. The pyramids contain bundles of microscopic urine-collecting tubules and capillaries. Structures known as the Renal Columns separate the pyramids from each other. c. Each pyramid and its surrounding tissue makes up one of eight lobes of a kidney. 3. The Renal Pelvis-a funnel-shaped tube that is continuous with the ureter leaving he hilum. a. Branching extensions of the Pelvis form two or three Major Calyces, each of which subdivides to form several Minor Calyces. b. The Minor Calyces are cup-shaped areas that enclose the papillae of the pyramids. 1) The calyces collect urine, which drains from the papillae, and empty into the renal pelvis. The urine then flows through the renal pelvis and into the ureter which moves it to the bladder where it is stored. 2) Smooth muscle lines the walls of the calyces, the pelvis and the ureter. Urine is pushed through these areas via peristalsis.

In what part of the kidney are most of the nephrons located? Renal Cortex 4. Blood supply of the kidney: • Branch of aorta that enters kidney is the renal artery, which divides several times as it moves toward the cortex. • At the base of the renal pyramids, the arcuate arteries branch into interlobular arteries that branch into afferent arterioles that deliver blood to the glomerulus. • The efferent arterioles exit the glomerulus and give rise to the peritubular and vasa recta capillaries surrounding the renal tubule. Secretion and reabsorption occurs between the tubule and bloodstream in these capillaries. 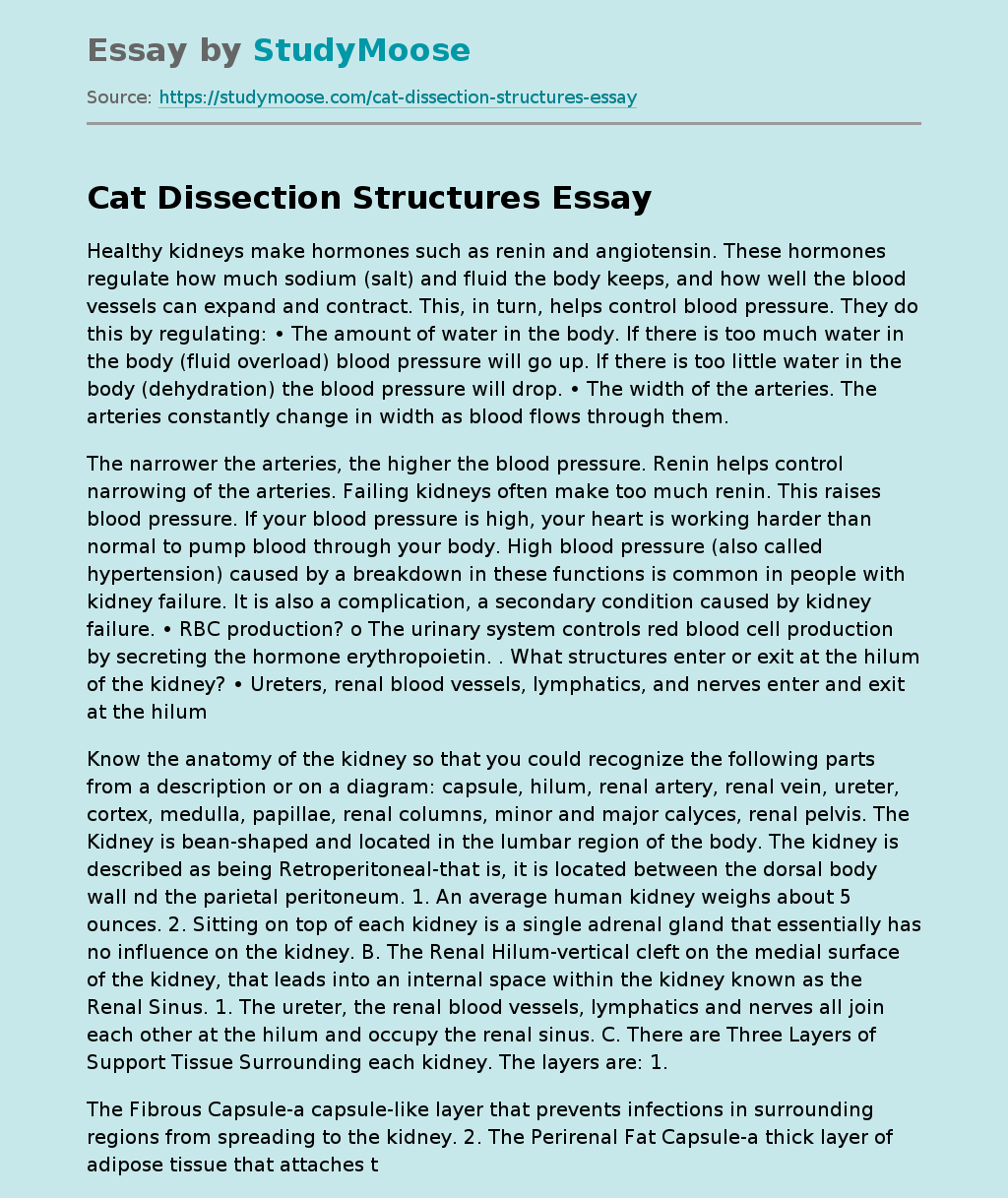