A review of the novel “The Awakening” by Kate Chopin, focusing on the main character, Edna

Casting Shadows Happiness; is it essential or is it a mere unimportant simplistic virtue in life’s plans? Does everyone have the right to happiness? It is stated in the Constitution that we as Americans have the right to life, liberty, and the PURSUIT OF HAPPINESS.

In the novel The Awakening by Kate Chopin the main Character Edna has the “perfect life”. The sweet loving husband, the cute children, enormous amounts of money and an extremely large house.

Don't use plagiarized sources. Get your custom essay on
“ Chopin’s Novel The Awakening and Edna Character ”
Get custom paper
NEW! smart matching with writer

Yet with all of this Edna is partially happy, but is not fulfilled. Since having a rushed marriage to spite her parents Edna never took time to examine her life to see what she wanted out of it. Edna late in the marriage wanted the freedom to explore her mind, find herself and find what this person liked. In the following I will defend the actions Edna took to find her happiness as irrational as they may seem.

This story took place in the late 1800’s when women’s liberation was never heard of. In this era women were supposed to find happiness in serving their husbands and taking care of the children. There were no other options within the restrictive boundaries of marriage, and divorce was never an alternative. Women’s lives were austere and self enrichment or self gratification were often times cast aside relative to the more mundane tasks of daily life. Most women accepted this but Edna did not.

She figured that life was more than constantly doing for someone else. She wanted time for herself in order to figure out who she was. Some may see this as selfish but everyone is entitled to “me” time and space.

Although I admit she did not go about it in the best way at times; Edna still was in going in the right direction. Edna’s marriage to Leonce Pontellier was to spite her father the Colonel because Leonce was of a different religious faith. Also, Leonce was unceasingly devoted to Edna which was something that had never occurred in any other relationship. Edna, who had not experienced many male relationships before this was naive when it came to men. This naivete affected her in such a way that she neither knew love and it’s limitations nor the experience it took to make it through a relationship.

This showed Edna’s immaturity which was a big issue in this story. This shown as the woman inside who had been asleep all those years. Her relationship with Leonce was what she sought to find happiness in. After six years of marriage to Leonce, Edna felt an ever-growing void in her life. She gave up all of her responsibilities such as taking care of her children when they were sick and she never spent time playing with them. This shows a contrast between her inner self which was “awakening” and her outer self as a mother and a wife.

At first, her character is portrayed as accepting of the “outer role” in which she has to play. Soon after though she finds out that she can have fulfillment too. Edna’s “awakening” occurs and she is able to grow spiritually, intimately and emotionally.

Her life is confined as if in a cage. This confinement is represented by the parrot in the story squaking in French “Get out!”. He was caged and he was screaming to leave. The same is true of Edna’s heart. It was screaming for freedom and independence in her monotonous life. This resulted in her moving into the “pigeon house” that she purchased, which was a small house she bought around the corner from the Pontellier’s mansion. There Edna displayed her independence by her lack of acceptance of the things that Leonce had bought for her and proved to everyone including herself that no one had to be dependent on what society called the “moral way of living.” In the end Edna swims naked into the ocean that was so free and open freeing herself from societies restrictions.

She swam out smoothly and fearlessly and there she gave up herself to the ocean. Her decision to free herself of earthly bonds was made with great resolve. Edna had made her decision. She swam out and made the ultimate sacrifice…… herself. Edna knew she was born in the right place at the wrong time and there was nothing this life had to offer her. There was no room for free thinking women. She had two choices these being either to live her whole life in misery and hide her spirit and soul, or to sacrifice herself, that is her outer being and keep her dignity and essence. Edna chose the latter as she gracefully left this world.

All of Edna’s actions were not unintentional. She knew what she wanted like most, but Edna was the only woman to have the courage and the determination to go on the road less traveled. This story showed Edna’s awakening, and her realization that she had options and did not have to go along. This was her revelation but she knew that society would never accept it so she killed herself with dignity instead of being just another shadow. 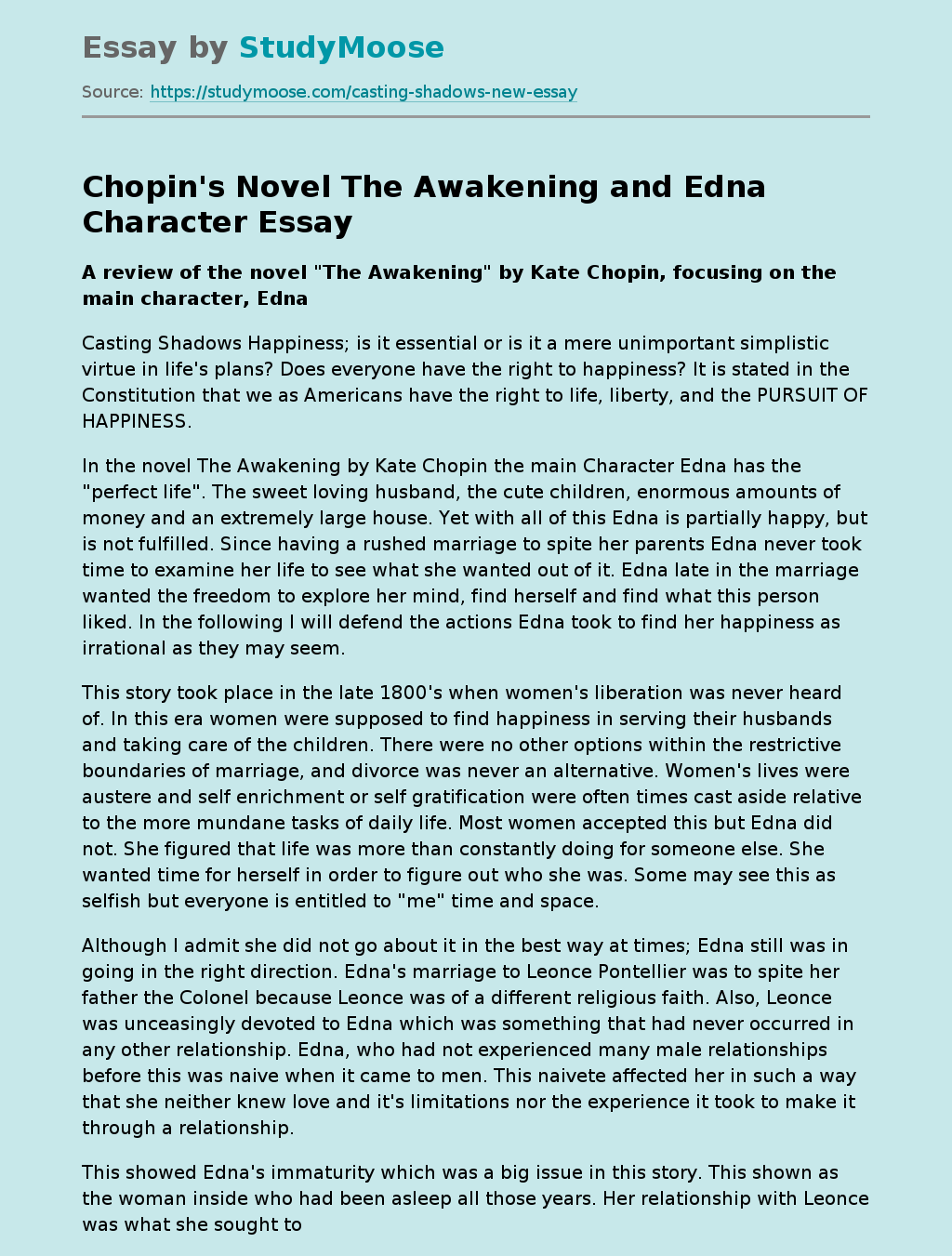