Rhetoric is the usage of words to persuade when writing or speaking. This was frequently used in William Shakespeare’s tragedy “Julius Caesar”, specifically in act 1 scene 2 by Cassius. By using his powers of manipulation with argumentation and persuasion, Cassius then tries to convince Brutus, a fellow Roman, to join in the conspiracy against Julius Caesar. Doing so, Cassius uses the rhetorical forms of pathos, logos, and the usage of rhetorical questions. One of the techniques used by Cassius is the use of pathos, or emotional appeal.

Being that Caesar has grown very popular/powerful around Rome, Cassius explains that if they continue to let him rule, they’ll only succeed in becoming his slaves. Saying that, he compares Caesar to a giant, “ Why man, he doth bestride the narrow world like a colossus and we petty men walk under his huge legs and peep about to find ourselves dishonorable graves” (Act I, Scene ii lines: 135- 138).

By comparing Caesar to a giant, it emphasizes his immense power throughout Rome and under his rule they’ll find themselves to be petty men, such an unhonorable position that they might as well be dead.

Cassius also plays among Brutus’ feelings towards fairness and equality. He does so by repeating Brutus’ name to Caesar’s, “Brutus and Caesar: what should be in that name ‘Caesar’? Why should that name be sounded more? Write them together yours is as fair a name; sound them, it doth become the mouth as well; weigh them, it is as heavy; conjure with ‘em ‘Brutus’ will start a spirit as soon as ‘Caesar ‘” (Act I, Scene ii lines: 143-147).

Brutus being a man of virtues and with an honorable ancestry, Cassius proves to him that he is just as deserving as Caesar and that Caesar shouldn’t be better than anybody, but equal. When using pathos, Cassius provokes among the morals that Brutus has to prove a point that Caesar is too powerful for his own good.

The technique of logical appeal, logos, is also used among the speeches of Cassius. He provides evidence of a past event that occurred to prove that Caesar is indeed a weak man aside from what the people of Rome think. He recalls the time he and Caesar went to Spain in which Caesar had a seizure, “How he did shake; ‘tis true, this god did shake. His coward lips did from their color fly, and that same eye whose bend doth awe the world did lose his luster; ay and that tongue of his that bade Romans mark him and write speeches in their books…” (Act I, Scene ii lines: 121-126). Revealing this, Cassius marvels that such a fallible man has become so powerful on his own; a man so decrepit such as Caesar shouldn’t represent the strong country of Rome. Knowing that Brutus has a famous, respected ancestor, Cassius alludes to the honor of Brutus’ family.

He invokes the image of Brutus’ much influential/celebrated ancestor, “There was a Brutus once would have brooked th’ eternal devil to keep his state in Rome as easily as a king,” (Act I, scene ii lines: 159-161). When saying that Brutus’ own ancestor would much rather let the devil rule than Caesar, he blames the lack of will given that allowed Caesar’s rise to power. By recalling past events and historical roman figures, Cassius logically manipulated the idea that Caesar, the feeble man he is, should be incapable of being crowned king. Aside from logos and pathos, rhetorical questions are presented as well. One example of it is when Cassius questions Caesar’s power/popularity. Being among noble men, Cassius wonders as to why Caesar is so great, “Upon what meant doth this our Caesar fed that he is grown so great?” (Act I, Scene ii lines: 149-150). Caesar although treated god-like, he is merely a man, no better Brutus or Cassius.

He infers on the idea that Caesar should be treated like everyone else, not overbear the power that should be shared. When comparing the names of Brutus and Caesar, Cassius rhetorically asks what it is that makes Caesar so special. Leaving him wonder as to why a man like Brutus isn’t as great, “Brutus and Caesar what should be in that ‘Caesar’?” (Act I, scene ii line: 142). Cassius is aware of Brutus’s character, and he knows very well that a titled man such as Brutus deserves the same, if not more better treatment than Caesar. Questioning the much respectable Brutus against Caesar’s strong power appeals to Brutus’s history and ambitions, showing that Caesar is one to be stopped or else the legacy of Rome will be ruined.

In conclusion to the analyzation of Cassius’ rhetorical techniques and their effects, what can be concluded is that Cassius is a very intelligent man in the terms of using pathos, logos, and rhetorical questions. When using pathos, Cassius is arguing on the issues of equality among Rome, reflecting on the idea that power shouldn’t be hoarded by one person, but shared. Upon the subject of using logos, he mentions past events to show that Caesar is not the powerful man he appears to be, following up to the concept that a strong ruler will reflect for a strong nation. And with rhetorical questions, Cassius makes Brutus question Caesar’s great power and that Brutus himself deserves more, being a man of high nobility and morals. 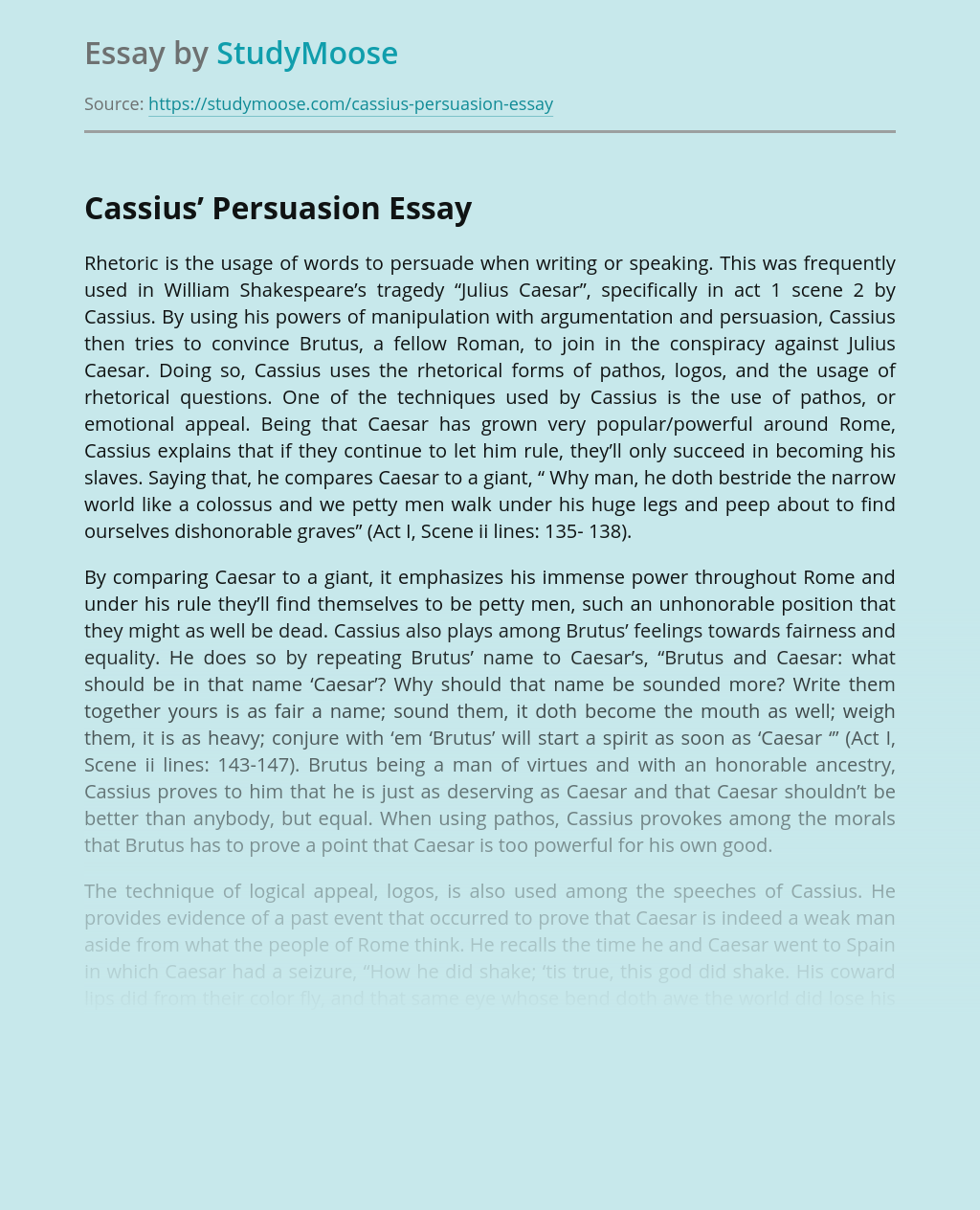