The main crops of Pakistan are classified into food crops and non-food crops. The food crops include wheat, rice, maize, coarse grains, grams and other pulses. The cash crops are cotton, sugarcane, tobacco, mustard and sesame. The total area, yield and production of each crop is now discussed under separate heads.

(A) FOODS CROPS (1) Wheat: Wheat is the principal food crop of the people. It occupies an important position i farming policies. The share of wheat is 3% to GDP.

Don't use plagiarized sources.
Get Your Custom Essay on Cash Crops of Pakistan Just from $13,9/Page

The area under wheat crop was 8494 thousand hectares and wheat output stood at 23. 2 million tons and it contributed14. 4% to value added in agriculture in 2006-07. The area and yield of wheat has gradually increased in Pakistan dye to the introduction of new wheat varieties, improved agronomic practices, increased water availability and improved water use efficiency greater use of fertilizer wide spread use of mechanical implements, better storage facilities and a support price policy and favorable weather conditions.

The agriculture of Pakistan is to face another big challenge from the World Trade Organization regime (WTO) from the year 2005.

According to the WTO agreement on agriculture, it is necessary for each country, to provide market access to international commodities and to do away with domestic and export subsidies. Pakistan will now have to take steps to minimize the cost of production of crops and also maintain quality of goods to compete in the international market. With the advent of Green Revolution the wheat production has increased from four million tones in 1960 to 23. 5 million tones in 2006-07. In order to increase the yield of wheat per acre, some additional measures shall have to be taken.

These in brief are (i) Development of new high yielding varieties (ii) production and distribution of certified seeds (iii) Timely sowing of wheat (iv) Timely availability of fertilizer and (v) elimination of weeds from fields. The production of wheat in 2006-07 is highest in the history of country. Pakistan now is not only self sufficient in wheat but is also in a position to export the surplus wheat to other countries. (2) Rice: Rice is the 2nd largest food crop in Pakistan. It is now a major export item accounting for 6. 1% of total export earnings over the last five years and contributes 1. % to GDP. The production of rice during 1999-2000 was 5156thousand tones. It came down to 3882 thousand tones in 2001-02 and increased to 5438 thousand tones in 2006-07. The Government of Pakistan is taking effective measures to increase the yield, production quality and export of rice. Research efforts are continuing on developing high yielding basmati and Iris varieties. Emphasis is also being laid on agronomic research as well as on improved extension services fertilizer use, direct seeding etc. The flow of inputs and credits is also being substantially increased.

Spray is also provided to the rice growers at subsidized rates. Pakistan produces finest quality of rice named as ”Basmati” It enjoys monopoly in the international market. After Thailand, Vietnam, USA and India, Pakistan is the fifth largest rice exporting country in the world. (3) Maize: Maize is an important food grain as well raw material for edible oil production. It is also used to produce starch and poultry food mixes. The total area under maize was 1026 thousand hectares in the year 2006-07which has doubled since independence.

More than half of the crop is growth in NWFP and almost all the remainder in Punjab. The total production during 2006-07 was 2968 thousand tones. The main reason for the poor performance in this crop is the lack of adequate seed supplies and inadequate farm practices required to obtain high yields from hybrid and synthetics. Efforts to remove existing constraints are urgently required to increase the production of this valuable crop. (4) Barley: Barley is an important coarse grain crop. It is grown in dry, arid conditions.

The total area under course grains in the year 2006-07 was 93thousand hectares. The use of barley for human consumption has declined considerably in recent years. It has been replaced by wheat. However, the course grains constitute an important food and fodder source. It is also being increasingly used in the poultry feed. The low yield of course grains is mainly due to inadequate fertilizer use, poor land preparation, lack of plant protection and thinning of crop for fodder. (5) Gram: Gram is an important source of vegetable protein and play an important role in the diet.

(B) CASH CROPS 6) Cotton: Cotton is the most important cash crop of Pakistan in terms of area and value addition. It is the main foreign exchange earnings for the country with the production of 13. 0 million cash return to the farmers. It supplies raw material to the textile industry and provides employment to the people living in both rural and urban areas. Its contribution is 1. 8% to GDP, The area and yield of cotton from the year 2002-03 is given below: The Government of Pakistan has provided following support to cotton production system in the year 2006-07. (1) Subsidy of Rs. 00 per bag of fertilizer. (2) Electronic media was used fr quick technology transfer among the growing community. (3) Availability of agricultural credit at the door step of the farmers. The Government plans to increase cotton production to 14. 4 million bales in 2007-08 (7) Sugarcane: Sugarcane crop serves as a major raw material for production of white sugar and gur and is also a cash crop. Its share in value added in agriculture is 3. 5% and in GDP 0. 7% in 2006-07. Sugarcane was cultivated on an area of1029 thousand hectors during the year 2006-07.

The higher sugarcane production is the result of increase in area, timely rains, easy availability of fertilizer and pesticides and attractive prices of sugarcane offered by the millers. (8) Tabacco: The total area under tabacco, during the year 2006-07 was 62thousand hectares and production 126 thousand tones. The production of fine Virginia tobacco is mainly concentrated in lower landaus Basin, plains of the Punjab and NWFP. Pakistan is meeting its domestic requirements of tabacco and is exporting a sizeable quantity of manufactured tobacco in the from of cigarettes.

In order to increase production new varieties of tobacco need to be development. Funds should also be provided to boost the research and development programmers with a view to reducing the cost of production and improving tobacco quality. Tobacco growers cooperation should also be organized. (9) Oil Seed and Vegetable Oils: The main crops grown for oil are rape and mustard seeds sunflowers, safflower soybeans. Total requirement of edible oil was1. 9 million tones. which 32% was met through domestic production and remaining68% was imported. 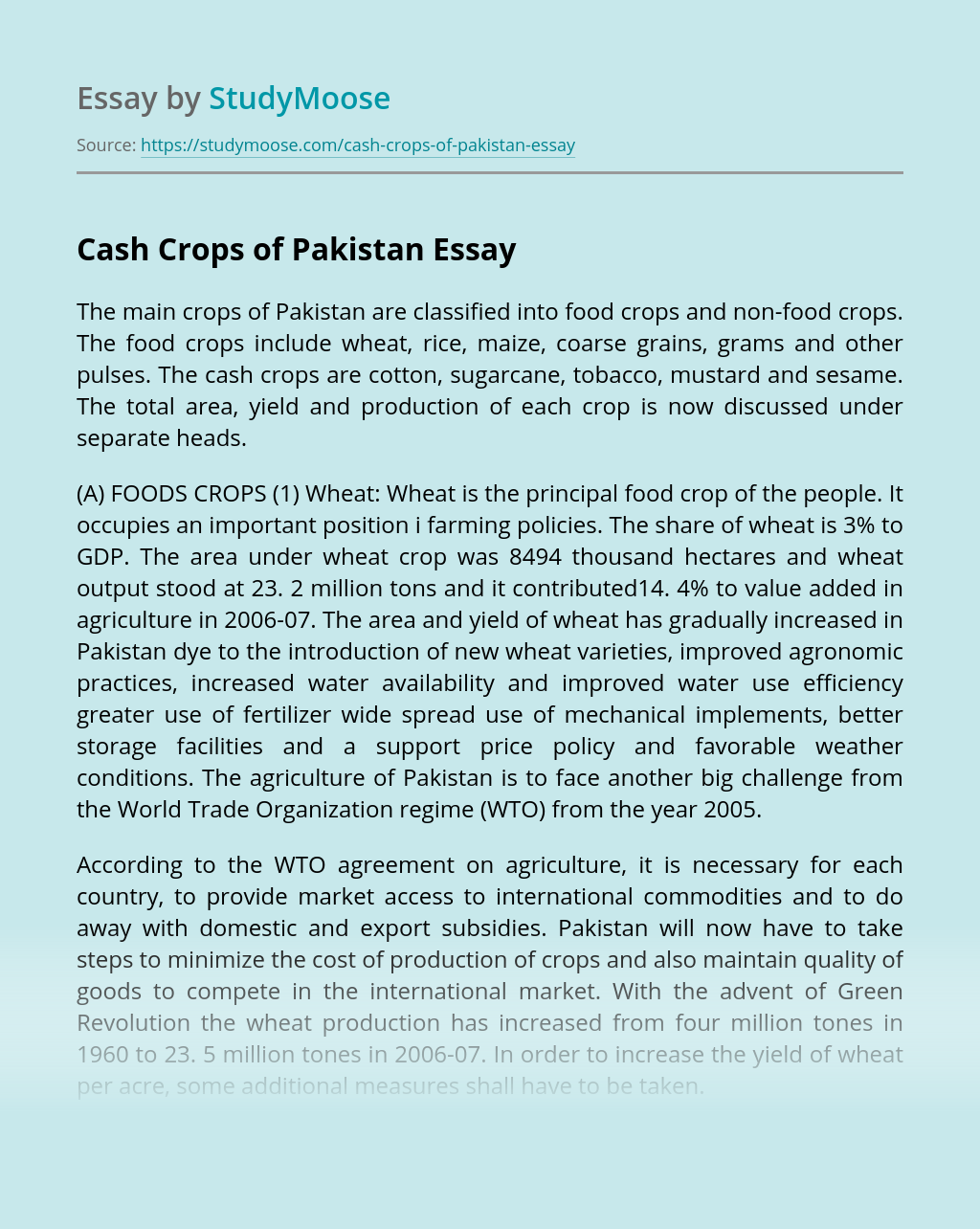 Rate this post Abstract: Corruption is a very old problem in government, and concern about corruption has shaped the development of public services. For example, in many countries a Public Service Commission conducts exams or sets for the selection of suitable Candidates to be appointed to the Civil Service posts. In this way it prevents...

Get Essay
Youth in Pakistan

Rate this post Pakistan is a developing country and youth in Pakistan makes up about 35% of it’s total population. In the midst of crunching times, when Pakistan is facing severe issues such as terrorism, economic crisis, target killings, disunity and disunity, the burden to take the country out of the whirlpool is upon it’s...

Private and Public School in Pakistan

Rate this post Schooling from the very beginning is the first priority of every parent. Private schools in Pakistan have increased their number in no time, because the parents have completely inclined themselves towards the private schooling. Numerous reasons are there, but the few prominent ones are the quality of education and security. It is...

Rate this post Kashmir has been fighting for freedom for more than 65 years now and on the other hand pakistan has been desperate to bring it under its administration and control since the independence ! Not only pakistan but there have been border disputes with china also that from too pre-independence times . People...