This case shares with us about the story of Galanz Enterprises Group Co. Ltd. (Galanz) had transformed itself from a manufacturer of down feather products into a world class manufacturer of microwave ovens producing more than 50 per cent of the global output in 2007. This case describes the competitive and operational strategies that Galanz used to achieve such a meteoric growth. The company started out with a clear competitive strategy based on cost leadership. It designed and implemented operations system to help achieve lower cost through economy of scale, the transfer of production capacity from developed countries and full utilization of the available production capacity.

Don't use plagiarized sources.
Get Your Custom Essay on Case Write-Up: Galanz Just from $13,9/Page

At the early stage, Galanz did not have any competitive edge in production technology but only an abundant supply of cheap labor and land. Thus the only way to compete the market is to offering a low price. From 1996 to 2002, Galanz adopted a low-price strategy by repeatedly implementing cycles of price cutting and production capacity expansion.

2. Rank the importance of Galanz’s operations objectives of cost, quality, flexibility, delivery, service and innovations. How has the importance changed over the years? At the very beginning, Galanz ranked cost as the most important operations objectives. The rest objectives are ranked equally after the cost. After the early success resulted by the price war and cost leadership, Galanz started emphasizing the importance of innovation and quality. Since 1996, the rapid growth of Galanz endangered the market share of foreign brands such as Toshiba and Panasonic who are also the suppliers of Galanz on magnetrons. To limited the threat from Galanz, Toshiba and Panasonic reduce the supply of magnetrons, which forced Galanz developed and produced its own magnetrons. To reduce the cost and improve the quality, Galanz started to vertically integrate its supply chain by manufacturing more of its components.

3. What is the role technology has played in the success of Galanz. The technology have play very important role in the success of Galanz. The supply crisis of magnetrons motivated Galanz put technical innovation on a more important position. The collaboration with local university and institutes helped Galanz mastered the core technology of magnetron. Continuous invest on innovation and learning the most advanced technologies from overseas partners allowed the company to reduced costs, improve the design of the products and lifted Galanz into the high-end product market. 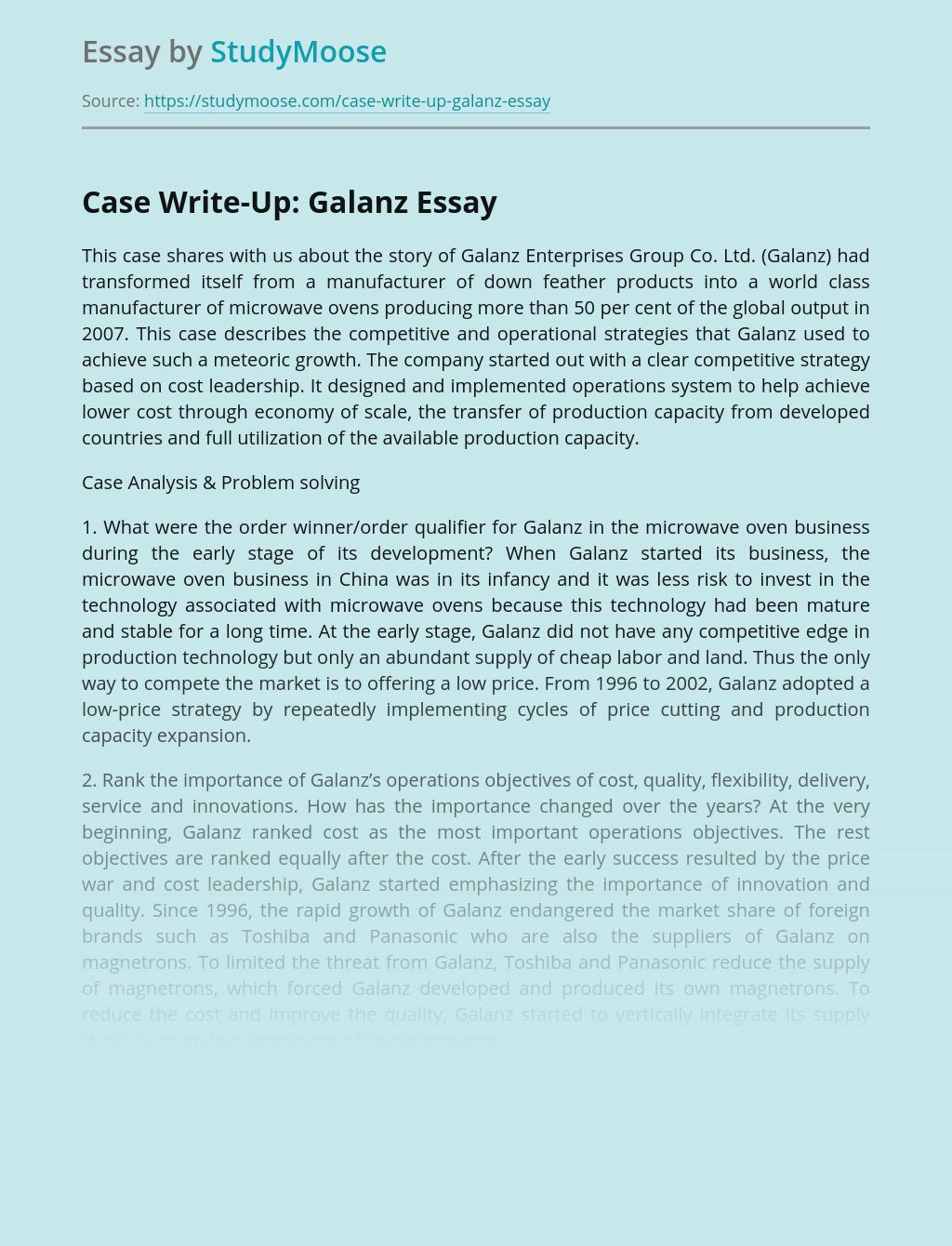