PROBLEM: * The Virgin Group is so unrelated diversified that it has been criticized by some commentators because it has become an “endorsement brand that could not always offer real expertise to the businesses which it is associated”. So the real question is “Can The Virgin Group be good/successful in every business it gets into?” “Are they really adding a real value to each business/customer? * What will happen if a customer has a bad experience with any of the product lines of the Virgin Brand? Would that influence this customer to never try again another line of this brand? Some commentators have found a big risk with Virgin’s approach stating that: “The greatest threat is that Virgin Brand may become associated with failure”.

Don't use plagiarized sources. Get your custom essay on
“ Case Study the Virgin Group ”
Get custom paper
NEW! smart matching with writer

Can that be possible? * Richard Branson’s is associated with the Virgin Brand, this sure has been the key to the success of this company, but can also his image fire back toward the Virgin brand if he gains a bad reputation? What can be the consequences?

Organizational: * The Virgin Group is one of the UK’s largest private companies.

(S) * The Virgin Group included in 2006, 63 businesses such as airlines, health clubs, music stores and trains. Also included Virgin Galactic which promises to take passengers into the sub-orbital space. (S) * The personal image and personality of Richard Branson, the founder of the Group is highly bound up with those of the company. (S ,W) * Branson announced in 2006 his plans to invest $3bn in renewable energy.

(S) * Virgin’s partnership with cable company NTL, undertook an expansion into media challenging publicy the way NewsCorp operated in the UK and the effects on British democracy. (S ,W) * Virgin was founded in 1970 as a mail order record business and developed as a private company in music publishing and retailing. (S)

* In 1986, Virgin was floated on the stock exchange with a turnover of 362.5 million (Euros). (S) * Branson decided to take the business back into private ownership and the shares were bought back at the original price offer, when the price of the shares began to fall and because of the pressure to create short-term profit. (S ,W) * Virgin’s expansion had often been through joint ventures whereby Virgin provided the brand and its partner provided the majority of the capital. I.e.: For cosmetics and clothing Virgin provided 1,000 (pounds), while its partner Victory Corporation 20m (pounds). (S) * Built business with Virgin Mobile, by forming partnerships with existing wireless operators to sell services under the Virgin brand name. The carrier competences lay in network management. Virgin set out to differentiate itself by offering innovative services. (S)

* Virgin has been described as a “keiretsu” organisation. A structure of loosely linked, autonomous units by self-managed teams that use a common brand name. (S ,W) * Virgin Atlantic, which is owned in 49% by Singapore Airways is one of businesses Branson will never sell, despite of the cyclical nature of this business. He included airline businesses such as Virgin Express (European), Virgin Blue (Australia) and Virgin Nigeria in the group. (S) * Branson has reported about withdrawing from the business which more or less can run by itself now, hoping that his son Sam might become more a of Virgin figurehead. At the same time he launched his initiatives in media and fuel. (W)

Environmental: * Branson’s public image and special appearances has contributed to the definition and recognisability of the brand. (O) * Virgin is putting up the Capital for Virgin Fuels and is using the brand to attract the attention to the issues and possibilities that the technology offers. (Different from the other business) (O) * In 2005 announced the establishment of a “quadruple play” media company providing television, broadband, fixed-lined and mobile communications through the merger of Branson’s UK mobile interests with UK’s two cable companies. (O) * Branson describes Virgin as “a branded venture capital house”. There was no “group” as such; Virgin was described as a family rather than a hierarchy. (O)

* In 2006 Branson explained the basis upon which he considers opportunities: be global in scope, enhance the brand, be worth doing and have an expectation of a reasonable return on investment. (O) * Branson’s engagement with “greener” fuels has created a debate on measures to reduce carbon emissions from airplanes. (O) * The public flotation of individual businesses rather than the group as a whole has become an intrinsic part of the “juggling” of finances that underpins Virgin’s expansion. (T) * Virgin argues that its brand research indicated that people who have had a bad experience will blame that particular Virgin company or product but will be willing to use another Virgin product or service due to the very diversity of the brand. (O , T) * In 2000 Strategic Rail Authority Review voted Virgin Rail on 23rd and 24th place among 25 railway operators what had a great negative impact on Virgin Group overall reputation. (T)

Values & Aspirations: * The Virgin name was associated with words such as “fun”, “innovative”, “daring” and “successful”. It was chosen representing the idea of the company being a virgin in every business it entered. (1) * Establish The Virgin Brand as a major global name. (2)

* Virgin won an award for the best wireless operator in the UK. (4) * Branson saw Virgin adding value in the three main ways, aside from the brand: Public relations and marketing skills, its experience with Greenfield start-ups; and Virgin’s understanding of the opportunities presented by “institutionalized” markets. (3) * Each company is “ring-fenced”, so no company had no rights over the assets of another; providing not only financial protection, but also to a business ethic aspect. (5) * The increasing conformity between personal interest and business activities could be discerned in the establishment of Virgin Fuels. Branson has stated that by using non-oil-based fuels a Second Gulf War can be prevented. (7) * The line between personal conviction and business interests is everyday more thin. (6)

KEY ASSUMPTIONS: * Branson’s taste for his brands of business remains undimmed so will surely continue this way. He has grown his business using the Unrelated Diversification Strategy, which is based in entering new businesses sectors outside the core activities; such as travel, telecommunications, trains, cosmetics. * He will continue investing in “Green companies” producing ethanol and cellulosic ethanol fuels in competition with the oil industry. He has already started to Go Green, so surely all his companies will follow this new eco-friendly trend.

* Branson’s son may be taking the lead of the company in the future. His statements toward leaving the company in the future and let his son take the lead may be to prepare his entire workforce for this moment. * Even though the Virgin Brand is powerful, Branson’s image is strongly related to the company, so if he decides to go, will the next person in charge be able to maintain the same cultural organisation that has identified this company till now? * To be part of the World history, by becoming the most powerful Brand and Company, not only of the UK, but also Europe and make many other businesses in other Continents. * Become a leader of non-oil industry. His high investment in this area confirms his seriousness about this issue.

* Continue investing on more R&D in new and innovative technologies in order to expand the company’s position in entertainment and telecommunications market. He is already the leader in the mobile service due to correct strategy and implementation. * Virgin Galactic may become the leading company to send humans to space, making this company be part of the Humankind History.

SOLUTIONS: * So far Branson’s strategy has leaded him to success. He must continue making new alliances and also to strengthen the ones that have been made so far. The strategy used by the Virgin Group, based on Unrelated Diversification has been the key element of success of the company. This strategy has created a unique culture and corporate structure needed to build a strong competitive advantage.

* The investment of new R&D technologies may make the difference for this company’s future. It has the potential to become a Giant in the IT area. * Continue gaining competitive advantage over the market by identifying themselves as the fun, playful and innovative company they have been so far. This marketing campaign has helped Virgin Brand to gain loyal customers. * Expand the Virgin Brand into new continents. Select another target markets in the Asian and African continents where surely can form alliances with local markets and gain competitive advantage by the strong growth potential. 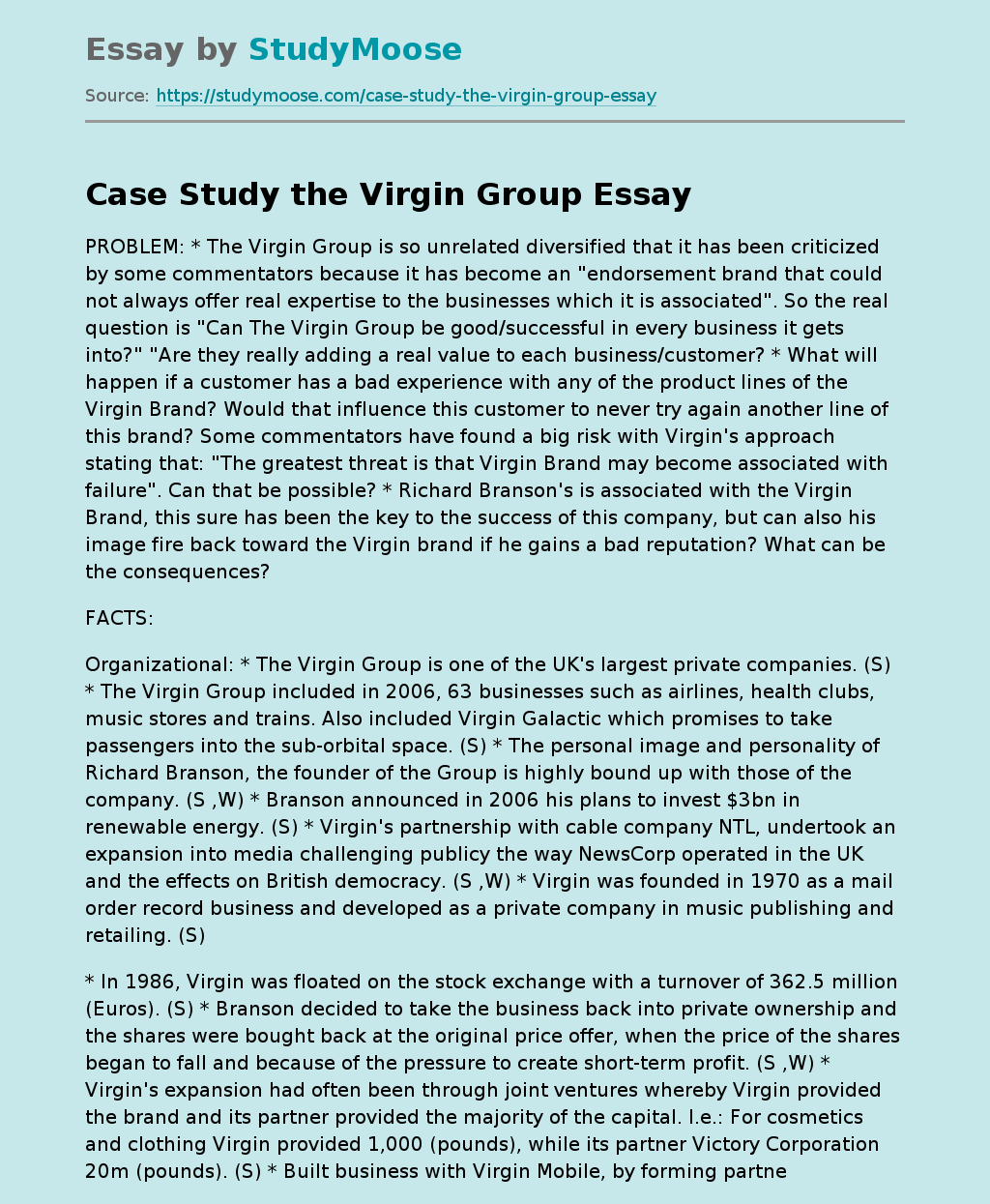