Ocean Carriers is contemplating the opportunity of stipulating a 3-year leasing contract that would require commissioning the construction of a new vessel. In the short term applied hire rates are decreasing, just as they should be on the recovery side starting 2003. While signing a new client and therefore expanding the business, the aforementioned investment should be undertaken in Hong Kong. Furthermore, a 15year project is preferable, thus scrapping the vessel at an estimated price of $5M in order to reinvest that amount and avoid facing heavier upcoming costs.

Although the longer lasting project (25 years) guarantees a higher net present value and forecasted rates seem to be increasing, less agility on future market occasions, increasing hire rates volatility and risks to bear for the corporation must be considered. Moreover, the alleged strong correlation between number of shipments and hire rates is being questioned.

Provided that Ocean carrier’s fleet doesn’t present a ship which meets the new customer’s requirements and that a fairly long time is needed to build a new one, the management has to decide in 2001 whether to commission a vessel for a 3-year time charter beginning in 2003 at an initial daily hire rate of $20,000 growing at a pace of $200 per year of contract.

Many factors are to be considered such as the daily hire rate and operating cost trends, the supply and demand of iron ore and steel which form the 85% of capesize dry bulk carriers’ shipments. The headquarter location, on which the tax regime depends, is too a critical decision: while in Hong Kong the operations would be exempt from tax, they would account for 35% on profit in New York.

For a better comprehension of the problem, we first focused on some possible outcomes depending on supply and demand tendency. In the short term, an excess of supply (63 new vessels) and no major forces influencing the demand will cause the hire rates to drop. Also, if the consulting group is to be fully trusted, a sharp decrease in iron ore vessel shipments will drive down prices as well. Looking at a longer horizon, supply and demand drivers are mainly, for the latter, the world economy as a whole and trade patterns i.e. the longer distance the more demand, and for the former the efficiency and size of vessels (negative correlation), the demand for shipping capacity and the age of the ships. These factors reveal positive long-term effects. Due to Australian ad Indian demand rocketing, exports will expand along with higher trading volume.

Moreover, Ocean carriers presents an advantage with regards to their ships: they are bigger and newer thus deserving a plus 15% factor over standard prices. Nevertheless, adverse aspects should be taken into account as well, such as the inefficiency in building a new vessel (2 years) which could lead to a growing demand for net working capital in order to strengthen the company’s financial position and make it able to face sudden cash outflows. In addition, given their better growth pattern, Ocean Carriers should favour the spot and not the time daily hire rates instead of locking themselves up in long term, less flexible contracts.

Our view for the long run is definitely positive though not outstanding, with future growth resembling the inflation level. Considering the mentioned facts as well as all the assumptions, the choice that has to be made will be primarily influenced by the daily hire rates. These factors are the most volatile and difficult to predict and influence income, profit and finally cash-flows. Ms Linn’s decision should evaluate different and unpleasant outcomes before taking a decision based only on cash-flows’ NPV.  Firstly, when comparing Hong Kong’s and new York’s NPV, the no tax zone is clearly the better choice (see table 3 and 4 for calculations), with the 35% straight-line american taxation killing most of the profits from the investment’s first years. Even if we consider an accelerated depreciation system (MACRS) and compare equivalent profits, annuity figures are still worse for taxed areas (graph 3).

From this calculation we begin to see how actual cash-flow equivalent annuities are not markedly different between the 15 and 25-year no-tax projects. If accurately analysed, inter-period NPVs show an unexpected picture (table and graph 1). If the reinvestment of the scrap value could guarantee a real rate of return similar to the discount used (discount rate=9%,inflation rate=3%,real discount=5,83%), the two NPVs move closer. This partially explains why, of the two, the shorter investment is the best : a substantial chunk of the 25-year project’s NPV (74%) is created in the latter period of the investment (2017-2027) when prices are hardly predictable, more volatile and easily influenced by present expectations. $610.159,93 supplementary cash income are not worth 10 more years of holding period: operating and survey costs become too heavy to sustain the additional period of investment.

We carried on our analysis by looking at the hire rates and their expected value. The strong correlation between charter rates and shipments reported by the consulting firm is now being took into consideration (table and graph 2). The outsourced analysis states that when shipment numbers rise so should the same charter rates. Unfortunately this is wrong under a statistical point of view: whilst shipments and 3-year hire rates seem actually slightly related, the number of shipments and the spot rates go surprisingly in the opposite direction (Pearson correlation index=(0.3783)). Hence, long term NPV needs to be managed carefully being based on assumptions not entirely true.

The 15-year, no-tax investment is the right choice. The NPV of this project turns out to be positive, leading us to recommend the signature of the contract. Turning down this operation would mean wasting future earnings. Furthermore, the 25-year project is unsafe : it could dry out the company’s cash and equivalents and prevent the reinvestment of the scrap value ($5M) in more profitable projects. The extra return doesn’t justify a 10 year longer investment based on many unreliable assumptions, not supported by statistical data and which does not grant the flexibility that a shorter one would. 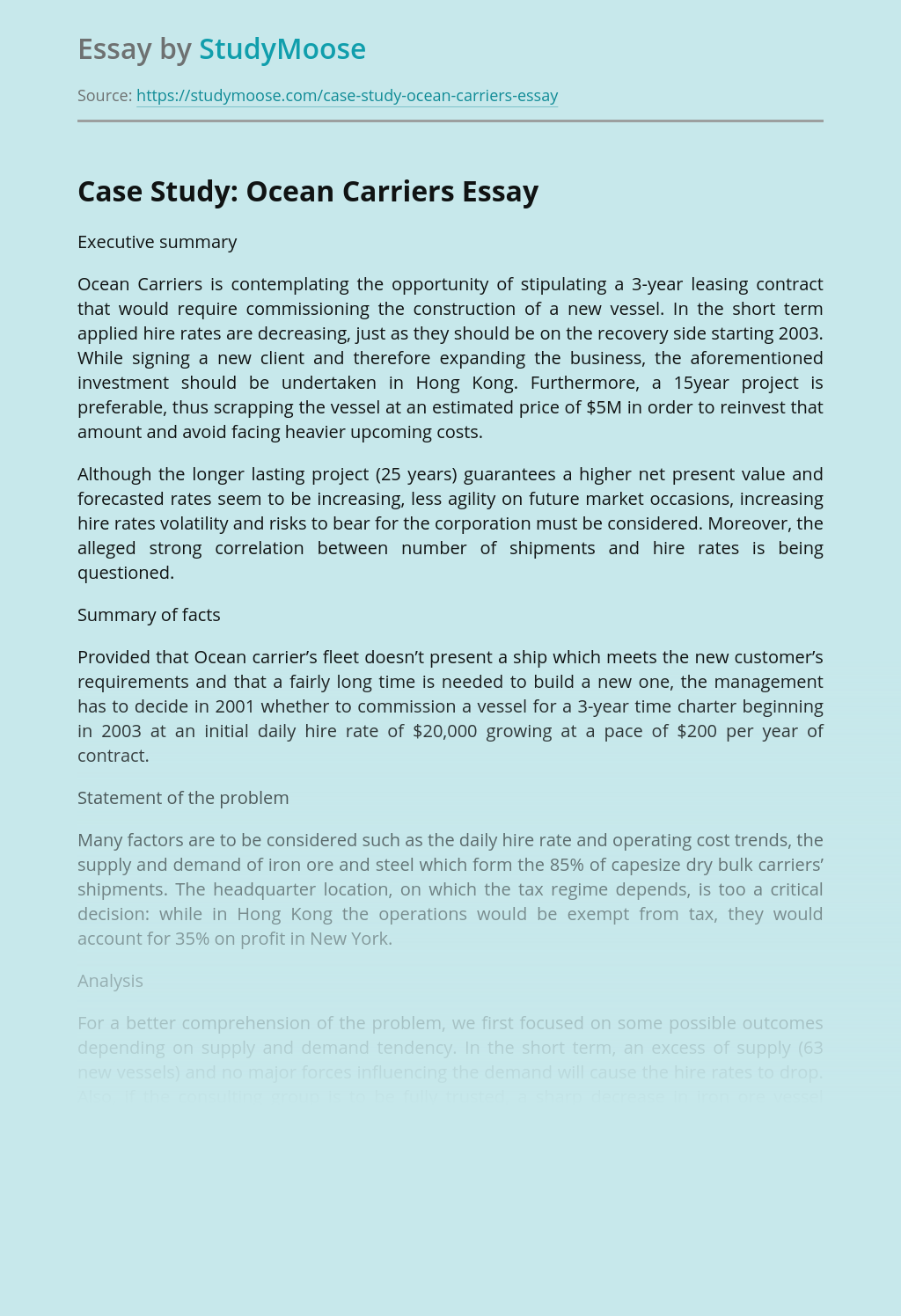