Case Study, Nigeria. What are critical resources that has given Nigerian exporters a positional advantage?

Demographics.The Gulf of Guinea houses the rich and narrow Nigerian continental shelf with a massive coastline of about 853km that lies on the Atlantic Ocean. Nigeria’s major cities are bordering the sea. Lagos is home to a vast population that is highly dependent on fishing as its economic activity besides petroleum and as elaborated by Oketoki, T. O. (2015) these cities are the Countries major shrimping zones just lying on adjacent to the vast Niger delta that is about 500km wide of river mouths, estuaries and lagoons.

Don't use plagiarized sources. Get your custom essay on
“ Case Study, Nigeria. What are critical resources that has given Nigerian exporters a positional advantage? ”
Get custom paper
NEW! smart matching with writer

The coastline of Nigeria is home to resources that if well utilized transforms to positional advantage. The country’s population of close to 200 million inhabitants provides ready and available cheap labor in the fishing sector besides giving a ready market. To further understand the source of Nigeria’s competitive advantages in the Shrimp and pawns sector that we are analyzing in this paper we need to establish the type of resources exposed to Nigeria then further investigate different orientation the sector used for growth and exploitation of its resources.

Historical situations that was exploited (colonial story -> British)Growth of the shrimping industryShrimping on the Nigerian waters was majorly artisanal and commercial industrial trawlers started in the early 1950s. In the late 70s Nigeria increased its fishing area by the exclusive economic Zone declaration giving it a up to an estimated of 210900 kmІ of fishing grounds in the maritime waters. According to the FAO 2008 Global study of Shrimp Fisheries, Organized fishing cooperatives societies benefited from a breakthrough of private sector involvement in 1980s as reported by Amire (2003).

Case Study, Nigeria. What are critical resources that has given Nigerian exporters a positional advantage?. (2019, Aug 20). Retrieved from https://studymoose.com/case-study-nigeria-what-are-critical-resources-that-has-given-nigerian-exporters-a-positional-advantage-essay 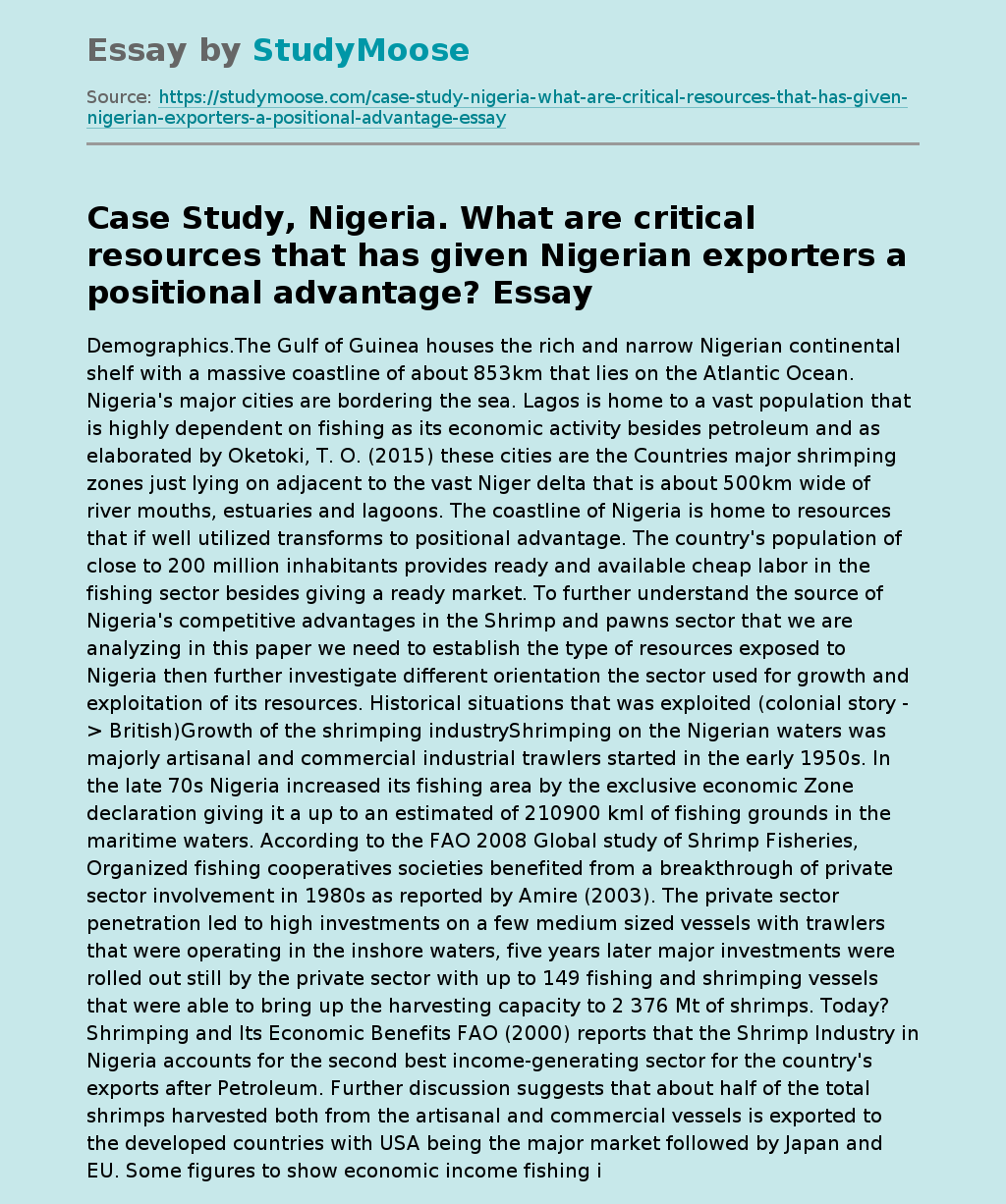