The case study given is about a fresh graduate, Mr. Rakesh Sharma joined Modern Industries Ltd. (MIL) in Bangalore as a trainee against a projected vacancy in the Paints Application Department for one-year training. Mr. Sharma has been performed very well. The Department Manager and the Training Manager were satisfied with his performance in the first two quarters. However, when stepping in to the third quarter, Mr. Sharma raised an issue about curtailing his training period. The request has not be entertained and Mr.

Counseling session and warning letter have been issued to him and the situation did not turn good. One of the primary objectives of the Training Department is to recruit who have good potential and train them to be effective persons in different department. The Training Manager clearly known that Mr. Sharma is a potential trainee but he failed to train him in different department and caused Mr. Sharma only have one choice of department to stay which is the Paint Application Department.

The Training Manager have to struggle on his rational decision whether to terminate or not to terminate Mr. Sharma.

These five options are apply employee engagement program, training and coaching system, giving short period to show improvement, reevaluate performance of Mr. Sharma and communicate and persuade the parties involved. HRM issues that cause to the problem Issue 1: Communications Effective communication is essential to business success. “You can tie back almost every employee issue attendance, morale, performance, and productivity to communication,” says Fred Holloway, an HR adviser in Medford, Oregon. Businesses without effective staff communication suffer from lost profits, poor productivity and poor employee morale. In order to solve many business problems, employees need to be able to collaborate and cooperate effectively.

Good communication can encourage employees to work harder, solve problems together and work towards a common goal. It is the job of every manager to ensure employees and superior are communicating effectively with each other. In the cases of MIL, we found that there is some communication problems between shop manager and Mr. Sharma; Training Manager and Mr. Sharma as well. More interaction / communication between trainees has to be established especially for performance appraisal purpose. Reviewing trainee performance once at the end of every quarter is too long for training manager to review their performance accurately.

Trainees’ performance might not be consistent from time to time and advise might need to be given to them. Also, training manager might lack of clearer understanding about their overall performance and problems they faced. Hence, this lack of communication between training manager and trainees including Mr. Sharma caused manager hardly to observe their actual performances, problem faced and what they really want or do they deserve to enjoy more benefit? These are all the grey areas that left out by performances review.

In this case, Training manager doesn’t seem to communicate well with Mr. Sharma when Mr. Sharma voice out his request. The manager’s reply upon Mr. Sharma is more considered as a perfunctory to Mr. Sharma. This caused Mr. Sharma to feel that the request and problems were not being taken seriously by management. As a result, it de-motivated Mr. Sharma to keep on with training. Manager should standing in employee’s shoes to understand better their exact situation and their needs. It certainly assists a lot to improve communication between manager and employees.

Hence, we suggest that manager should really look into the matter if any of the subordinate especially trainee voicing out opinion and requests. Manager should investigate and evaluate such matter deeply upon Mr. Sharma’s request to decide whether his performance is good enough to curtail his training period to 7 months and absorb him as engineer. Also, to look into trainee’s benefits whether it reaching satisfactory level for trainees or whether the matter is only happened on Mr. Sharma since there is an issue has been voice out by him.

He then started to become de-motivated and started rejecting to perform in some task which assigned to him, telling that the assigned work should be done by ‘regular workers’ instead of a trainee. Such action did not receive any attention in the initial period but it then become erratic and unacceptable at last. We think that Mr. Sharma portrait an attitude of egoism. Mr. Sharma only focuses on self- interest without being considering for others. In this case, Mr. Sharma tried to demonstrate to the company by practicing de-motivate attitude in work.

Employees in company supposed to work together as a whole and team work certainly the most important criteria. Unfortunately, Mr. Sharma failed to practice it in this case. Another sub-issue of the case is employment engagement. Mr. Sharma showed a low employment engagement to the company by becoming less aggressive and progressive towards the job as well as refusing to work on some task assigned to him. An employee with low engagement to company eventually lowers down the productivity and efficiency. We think that Mr. Sharma should have a long term view rather just focusing on short term benefits.

As a part of the company, he should show an active, progressive and aggressive attitude towards his work to convince training manager that he deserved to curtail his training period and get promoted to regular employee. Issue 3: Compensation and Benefits Compensation and benefits is an effective tool and method to motivate and reward a employee based on their performance. However, it could be a sensitive issue between employer and employee while discussing the content of the compensation and benefits. In this case study, Mr. Rakesh Sharma requested that his training period be curtailed to 7 months only and to absorb him as an Engineer.

He argued that he had been performing like a regular employee in the department for the last one quarter. He indicated that he would gain seniority as well as some monetary benefits as the trainees were eligible for a stipend only. The regular employees were eligible for many allowances like conveyance, dearness, house rent, education, etc. which was a substantial amount as compared to the stipend paid to a trainee. According to Mr. Sharma’s request, one of the main factors that he would like to be absorbed as a regular engineer is monetary benefits.

Hence, the differences between his on-the-job training benefits and regular employee benefits have caused him to come out with the request. This is also one of the issues that lead to the eventual problem of termination. Employee compensation is the employee incentives and rewards that can make all the difference when it comes to retaining good workers. Generally, compensation and benefits for a regular employee will divided into four categories which are:

The most common examples are stock options. These are the compensations and benefits that will received if you are a regular employees of a company. However, Mr. Sharma is not a regular employee yet as his on-the-job training is still on-going and only 5 months left. Hence, he still considered as a trainee in the company. Although a trainee is not an official employee of a company, he or she might not have salary. But, trainee may receive compensation and benefits from company. Trainee will receive a fixed compensation of monthly payment from company.

Depends on respective company, some company will afford trainee fringe benefits. For example, they will issue stipend for trainee, free meal is available for trainee. Besides, some company might issue health and medical subsidy for trainee too. Yet, a trainee compensation and benefits are still not persuasive when compare with a regular employee. Same with the case, Mr. Sharma requested to be promoted to a regular engineer is not because of his good performance on the job, it is also because of the compensation and benefits of a regular employee are more sufficient and attractive. 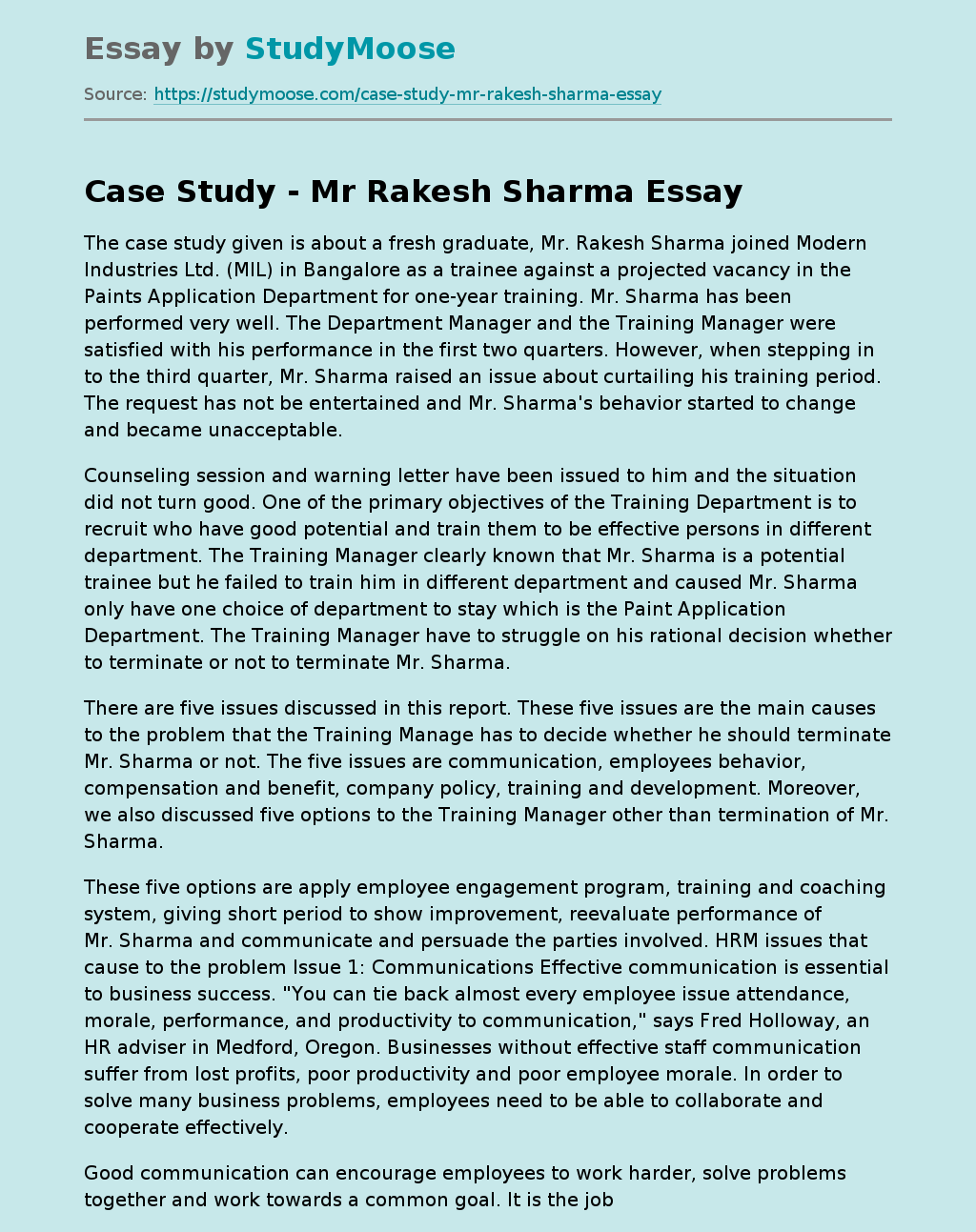