Joy St Clair Hester, or Joy Hester, was born 12th August in 1920 in Elsternick, Melbourne. Hester was an Australian artist during a time period where the work she produced was exceptionally unappreciated. After dying of cancer at age 40 (4th December 1960) she has become acknowledged. Hester’s work particularly is largely made up of human faces. Hester’s “Girl” and “Cancelled Sketch of Pauline McCarthy” display the use of human faces and her artistic style.

Joy Hester’s father, Robert Ferdinand Hester, was a bank officer and her mother, Louise May nee Bracher, was a school teacher.

She grew up in Melbourne during a dramatic and traumatic time period. She experienced times of war (World War II), the Great Depression, the introduction of Aboriginal rights in Australia (Stolen Generation) and the on-going gain of women’s right and feminism. During this time, change was brought about throughout Australia. The war meant that women became the source of help and had to take up jobs to support their family.

Women were forced into different and new roles to keep everything going strong for when the men came back from war. This saw a rise in women’s rights and feminism (movements and ideologies aimed at establishing equal political, economical and social rights for women). This would have affected her artworks as she may have reflected on the struggle women went through during these tough periods. The Great Depression would have affected Hester’s childhood as would have become an influence on her arts works as she may have recalled events and based her subject’s (people in her artworks) emotions on the ones she felt in the times of depression and need.

During the 1940s, Hester painted many portraits of the human face and often dealt with raw emotion she saw on the faced of those she saw suffering in Germany during Hitler’s reign. During this time, Hester was closely associated with the Angry Penguins – a modernist literary and artistic movement that sought to shake up the rooted art establishment in Australia – but did not receive the same amount of praise as her peers within the Angry Penguins (Arthur Boyd, Sidney Nolan, Albert Tucker, Max Harris and John Perceval). The support she received in the Angry Penguins and in some parts of the art society gave her a confidence boost and some inspiration.

Albert Tucker and Hester married in 1941. Tucker was a successful artist, but Hester still needed to find an audience that appreciated her work. Hester favoured the media of brush and ink, and because of this unusual choice, it set her apart from her colleagues. It also enabled her to develop many skills throughout her brief career, but drawing was not valued as highly as other media like oil paintings and was seen as introductory to a finished piece.

Her methods of working (which consisted of sitting on the floor and speedily producing her pieces) were seen as something more casual, as though she was more of a casual artist than a serious professional artist. Hester was diagnosed with Hodgkin’s disease in 1947 after seeming unhappy with Tucker. After the diagnosis, she left Tucker and her young son. She soon moved to Sydney with Gray Smith and during these years she created some of her best artworks like “Love”. The couple moved back to Melbourne and Hester gave birth to Peregine and Fern, despite being told there would be complications to her health and well being. Hester married Smith, after finding out that her friends, John and Sunday Reed, had adopted her son with Tucker. Not long after, Hester died from Hodgkin’s disease.

Hester’s artwork “Cancelled Sketch of Pauline McCarthy” is a painting of a girl’s face in a dark room with a doorway in the background. In the foreground is a girl, presumably Pauline McCarthy, with a sorrowful facial expression. The girl has facial features (eyebrows, eyes, nose and mouth) that are black in colour. Hester has used a really light grey as her skin tone.

The girl’s hair extends from the top of her head, exposing her forehead and falls over her shoulders. The hair is black at the roots and becomes grey as it continues downwards. The lines that define the girl’s features are thick and dark. She is positioned on the right hand side of the page. In the background of the artwork is a black wall with a grey rectangular shape as a doorway. Extending from the base of the wall to the bottom of the page is a grey floor with thin black lines used to create floorboards.

Line in this artwork can be described as bold, dark and thick, unless talking about the thin lines used to define floorboards in the background. The tone of the artwork is dark and shaded, the background being the darkest and her skin being the lightest, creating contrast within the piece. The artwork has a three dimensional element to it, created by the large scale of the subject’s face and the proximity of the wall – it is fairly distant. The colour scheme of the artwork is monochromatic and is dark and eerie, also quite dull, uniting the artwork because of the similar shades of grey and black.

The texture of the artwork is rough and coarse, as the colours do not blend together and the viewer can see the brush strokes Hester has used. There is no movement in the artwork as this is more of a static piece. Hester has created balance by weighing out the large amounts of darkness with a large amount of light from the subject’s skin tone. The lightness of her skin also makes her the focal point of the piece, emphasising her facial features. There is a large amount of space in this artwork because of the emptiness of the background, which creates visual depth.

Hester’s empty ‘room’ or wall could be her reflection of her life through the Great Depression and WWII when she more than likely didn’t have many items in her house. This painting was made during 1945, the same year Germany and Japan surrendered to the Allies, ending WWII. The gloominess in the subject’s eyes could reflect on the difficult times of the Depression. The doorway is lighter and it could represent the new life after the end of WWII and what it had in store. I think Hester has used and emphasised the subject’s face to display human emotion during the war, or the raw emotion of the people suffering in the concentration camps in Germany. The artwork could also reflect Hester’s own emotions during this time.

“Girl”, created by Joy Hester in 1957, is a simplistic artwork of a girl lying on her stomach with her arms folded under her head. The ground and her hair are the same colour, a murky ocean blue. So are her eyes and mouth, but she is missing a nose and eyebrows. The skin tone of the girl is white against the blue. Her face is positioned in the bottom right hand corner with her hair flowing across her back towards to left of the painting where the girl’s body begins. The girl’s eyes are slightly closed, glancing behind her. She is also almost smiling.

There aren’t many defined lines except the think blue lines of the girl’s eyes and lips and the line of her face, creating emphasis on her limited facial features. Lune us used to create emotion on the girl’s face. The shapes in “Girl” are irregular and aren’t curved; they are straight and solid, even the shape of the girl’s hair. The girl’s hair creates movement in the artwork, as well as acting as a leading line for the viewer as the eyes travel horizontally over the artwork. Her eyes are also looking in the direction that her hair flows. By using the blue for her hair, Hester has also created unity; tying the girl to the surface she is positioned on. Hester has also created uneven balance in the artwork by the use of more blue than white. “Girl” also has a rough texture, as you can see Hester’s brush strokes and the layers of ink.

Blue can be used as a calm colour, and the girl in the artwork seems relaxed and happy. This may be Hester’s way of displaying her happiness with Gray Smith and how relaxed she was with him, despite knowing she only had a few years, if that, to live. This artwork was made 3 years before her death at age 40. The artwork could also reflect Hester’s happiness due to the end of the war, 12 years before this artwork’s production.

Hester’s inspiration seems to be from human emotion or women, as a lot of her artworks focus on the human face, facial expression and women. During her time, Hester was underestimated because of the time she lived in. But now she is known for how she worked and how she used her media. 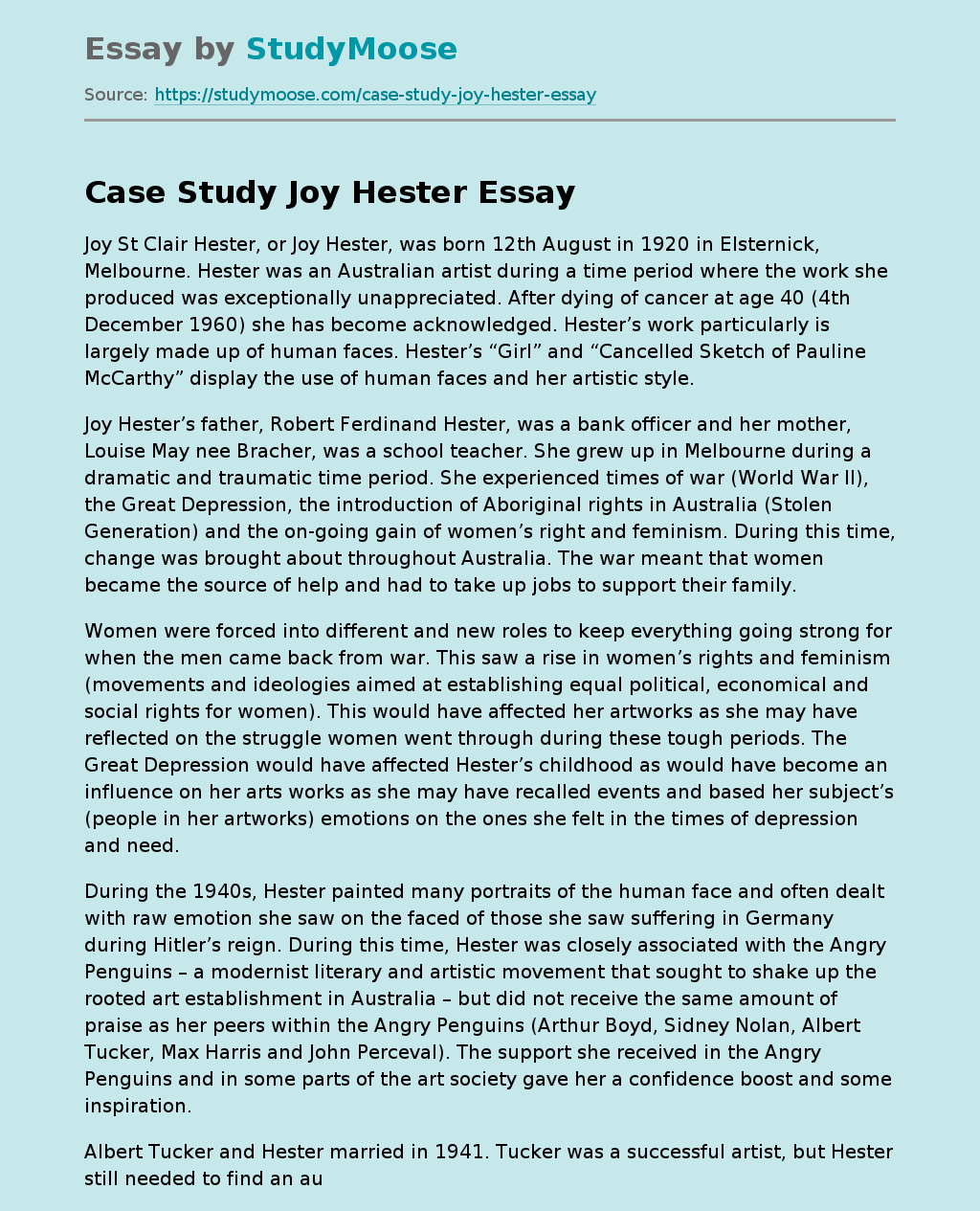