Samia’s Special Pizza’s was first set up in 1985 as a private limited company as was first opened in Manchester as a pizza take away shop. Our first shop was very successful and within the first two years we had decided to open a further three outlets in Manchester area. Samia Special Pizza were keen to expand throughout the UK and we realised that offering our business, as a franchise was the quickest way to achieve this aim.

In 1989 Samia’s Special Pizzas had sold our first franchise to a family friend who opened a unit in Leeds.

Don't use plagiarized sources. Get your custom essay on
“ Case Study of a Franchise Pizza Business ”
Get custom paper
NEW! smart matching with writer

Within three years we had sold fifteen franchises and the business was expanding increasingly. In order for the business to fund further expansion and our business had floated onto the stock exchange in 1993. It became Samia’s Special Pizza’s plc. The business venture prospered and by 2009 the chain had 600 franchise sites throughout the UK. Each site is licensed to a franchisee at an average price of £250,000.

For this sum franchisees receive a fully equipped outlet and in three weeks training plus ongoing support. This support includes advertising on both national TV and in newspapers. The Directors of Samia’s Special Pizzas have determined to carry on expanding the business. Our aim is to open an additional forty franchises every year until 2018. We have invested to open an on-line ordering facility for all franchises.

A franchisor is when a firm, which allows another person to use it’s tried and tested product, and trade under its name, for a fee.

A franchisee is a person who pays an initial fee and royalty payments for the privilege of trading under another firm’s name. The benefit of being a franchise for Samia’s Special Pizzas is that the business grows without the risk of debts as the franchisee becomes responsible for the debts. The franchisor can use the money, time, talents, contracts, recourses and ideas of others to expand.

Samia’s special pizzas can be sold by the directors/manager and still be owned by them and sell it over and over again. Samia’s special pizzas, which have a big firm, can decide to expand without investing large amounts of capital. The main benefit to the franchisor is that Samia Special Pizzas are able to increase their market share without increasing the size of our own firm. This can make Samia’s special Pizzas franchise a very profitable way to expand. A Problem could occur such as the directors may have little control over how the franchisee sells their products.

The advantages of using franchises as a development strategy is that they have to a large extent a greater chance of success than a majority of small businesses as the product has been tried and tested and has a secure place in the market. Franchises benefit from being able to use a brand name, which is advertised nationally. Franchises will find it easier to raise money from the banks as they are taking a less risk with a franchise operation than with an untried small business.

Some banks are able to provide medium term loans of five to ten years for up to two-thirds of the start up costs and an overdraft for working capital or money to run the business with. Buying a franchise can be a fast way to set-up your own company without having to start from scratch. The advantage of a franchise is that you can always check how other companies in the franchise are doing before you buy into it. You can check how popular it is and how much profit the store make.

A public company is a limited company (PLC) whose share can be brought and sold by the public and other firms. The two documents that are required to set up a PLC is the memorandum of Association, which is an external document that outlines the relationship of the company with the outside world. It includes the companies name a public limited company should use PLC after its name. The company is addressed to show where the company has its office registered. The object of the company that states the company is formed. E.g. “for the manufacture of making pizzas.” So if Samia’s special were to become a PLC then they would have to go through the same type of procedure.

The advantages of becoming a public limited company is that much more capital can be raised by a PLC than by any other kind of other business this will help Samia’s Special Pizzas to grow and that helps Samia’s Special Pizzas to expand and diversify. Other advantages of PLC’s include that the shares are listed on the stock exchange, which makes them available to be sold to the public. The shares are usually sold easily and have a minimum share capital of £50,000 and that large organisations have a high status and a good credit rating.

Disadvantages include that the founders or the original owners may lose control over decisions or have little influence over the decisions made therefore shareholder appoint directors/managers. As each shareholder has a very little say in how the company is run unless they own an awful lot of share. Also the interests of shareholders and managers can differ, the AGM and the annual report help to keep everyone informed and involved. If Samia’s Special Pizzas becomes a public limited company its will be easy for someone to buy enough shares to take over the company if they can convince the shareholder to sell the business. The PLC can have a large number of shareholders and their needs to be a general agreement on the company objectives.

This would make it difficult for Samia’s Special Pizzas to sacrifice profit to other objectives like helping the environment. Other disadvantages include that if Samia’s Special Pizzas were to become a PLC due to anyone being able to purchase share in the company, there is a slight chance of the company being joined to another company (merger) or even being taken over as stated above. Also if the company was to become very successful and expand so much there is possibility that there is no longer a good relationship between the owners/ managers and the employees.

More advantage for Samia’s Special Pizzas to become a PLC is that PLCS benefit form large-scale economy. This means that the company makes more money from buying for less (buying in bulk) and borrowing with cheaper interest rates. Banks and financial institutions are more prepared to finance their money into PLCS. Therefore it would be easier for Samia’s Special Pizzas to get money for the bank and to take out loans, as banks will be more willing to help the business out if it were a Public limited company.

The aims and objectives of the business are to make more investments opportunities so Samia’s Special pizzas to make it expand and that financial institutes are willing to larger companies. Banks will be more likely to loan money to Samia’s Special Pizzas if it were a public limited company than if it were a franchise.

Samia’s special pizzas need to expand the business and to make the business larger so there is a greater chance of having higher profits. Our Plc should benefit from economies of scale, the larger we make our business firm we can take the advantage of buying in bulk, employing more highly skilled workers and have many advantages in investment.

Other objectives of the business would be to provide a customer friendly service and to maximise profits by charging the highest possible price a pizza company would charge a high price for a luxury pizza. Another aim for Samia’s special pizzas would be to win a larger share of the market, by taking over a rival business.

The business is in the tertiary sector because it will sell the pizzas to the customers and businesses in the tertiary sector are involved in the sales of goods and services to the customers. The main competitors of Samia’s special pizzas would be other very big pizzas franchises that have been manufacturing and producing pizzas over a very long period of time and are very popular and well known such as Dominoes Pizza and Pizza Hut.

My role is the Marketing and the Sales Director and I have been appointed to investigate the possibility of opening a new pizza franchise called Samia’s Special Pizza’s. My role in the business is split up into five different tasks.

My first task is to find a suitable location for the store so the store can be situated in a most appropriate place where it is vastly populated with many people to attract a wide range of customers to the pizza store.

My second task is to find the most appropriate products to make and sell. The business will sell and produce pizzas; the main product that will be sold will be the pizzas and pizza related products.

My third aim will be to find the best way in which I can promote my pizza business such as I could use a variety of many promotional methods to advertise the products of my business. Because I will need to get the customers and the public to be aware of my new pizza franchise and to get people to came and make regular visits to the pizzas store to keep it running efficiently and the more customers we can get the more profit.

My fourth aim is to allocate the most suitable pricing strategies for the business such as I could use price penetration since my business is new to the world of marketing .My business is new so the prices of the products will start of cheap to attract new people then once the business gets popular and up and running the business can then start to make our products more expensive. Special promotional methods will help the business become more popular and help attract more customers with a range of suitable methods of pricing.

Finally my fifth aim is to make a recommendation or an overall conclusion to how and what good strategies they will use to open a pizza franchise business successfully. We intend to expand abroad and we have decided to open our first pizza shop America. The directors of our business Samia’s special pizzas are very keen to diversify and are considering opening a number of sandwich bars in London.

The example above is of a market map it shows which and us which of the pizzas are the most popular and which of the pizzas businesses is the cheapest. From the chart we can analyses that if we look at Dominoes pizza it is a vary popular place and that it is near the cheaper side then we can see the Strada it is still equally popular but it more expensive this shows that some people prefer to have top quality food and it can still be equally popular as the cheaper businesses. 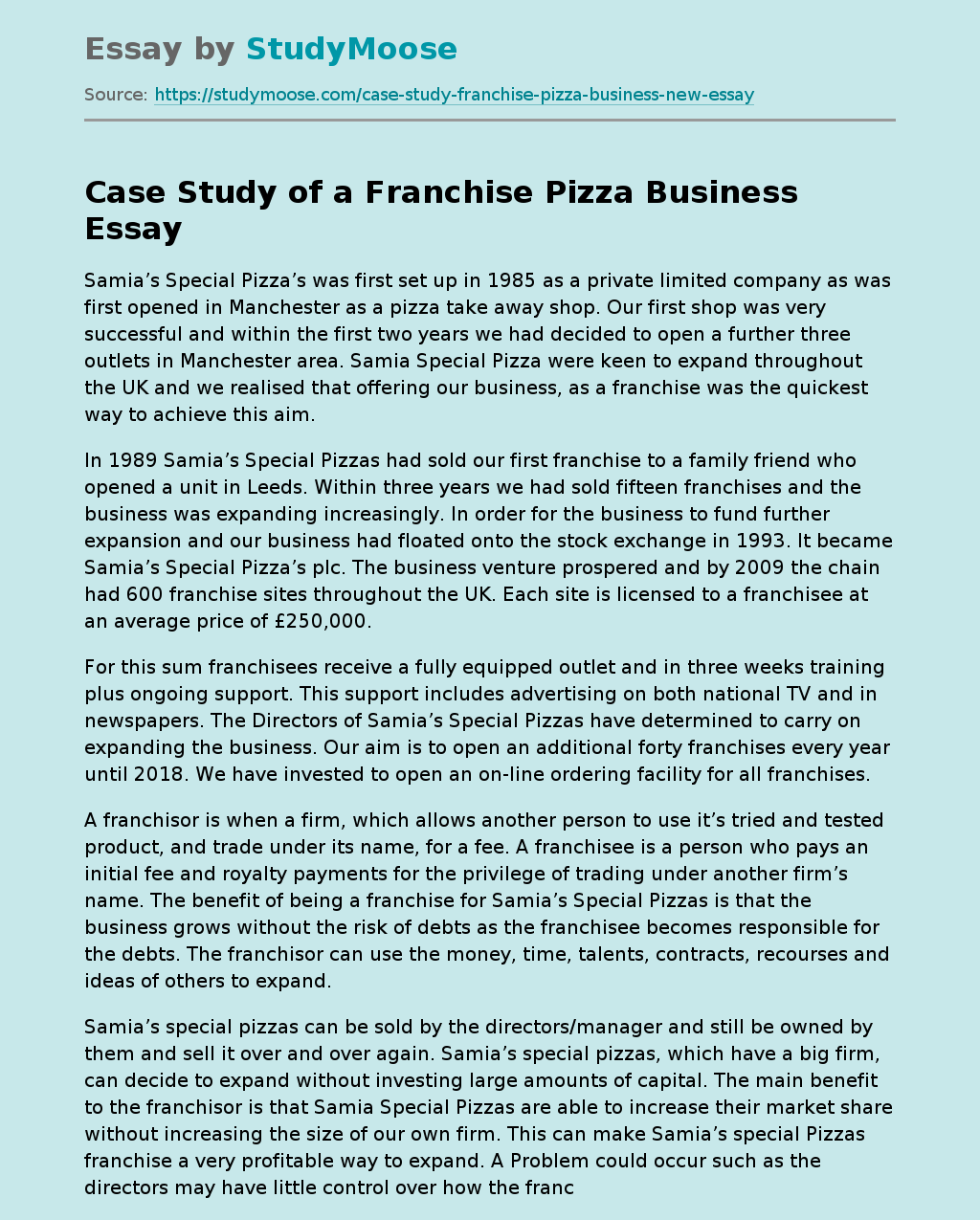