1. One way evolutionary psychology can answer Dylan’s promiscuity is that it has become a learned behavior that he has never had to correct/change. The study states that he has been promiscuous since high school and he sees no reason to change his ways.

2. To explain Dylan’s typical womanly interests being of mostly the same physical attributes, has to do with is innate drive for successful reproduction. His attractions to an athletic blonde of medium height, is what Dylan believes the best fit to produce healthy children.

Turn in your highest-quality paper
Get a qualified writer to help you with
“ Case Study: Evolution Psychology ”
Get high-quality paper
NEW! AI matching with writer

Even though Dylan shows no concern after the fact of having children, evolutionary psychology suggests that it is Dylan’s cognitive drive to find these types of women.

3. Such as Dylan’s evolutionary drive for an attractive partner to reproduce with, the women he agrees with dating have some of the same drives for success with their partners to reproduce with. They may know of his wealth and great looks which may be some deciding factors for their choice of a mate.

It isn’t until later that the women find out the not so attractive attributes of a man in Dylan’s position.

4. Dylan most likely takes his dates out for a tennis match, to test their physicality and athleticism. He may not want to base his decision on a mate just off of looks; he wants to know if they are strong enough to bring him strong offspring. We look at human evolution to justify this type of occurrence, even if it is a cognitive (subconscious approach) to determining a mate.

5. As we see in nature, many male species do not care for the offspring after birth. That job is left to the mothers and this can explain Dylan’s feelings towards his own children. He feels he found a mate for a reason, to have strong children that they can look after. He does not feel it is his part to raise the children, once he has found a suitable mate, his job is done.

6. Dylan does not use birth control, because he feels it is the female’s duty to keep herself from becoming pregnant if she does not want to be pregnant. Same goes for std’s , in the relationship , if the woman has chosen Dylan he believes she has made the choice to trust him. Dylan would use protection if he did not trust that the woman he chose to be was clean or not suitable for reproduction. He made a choice and so did the woman, he believes she has thought about all issues that may arise and that is why she is not worried about protection (in Dylan’s eyes). 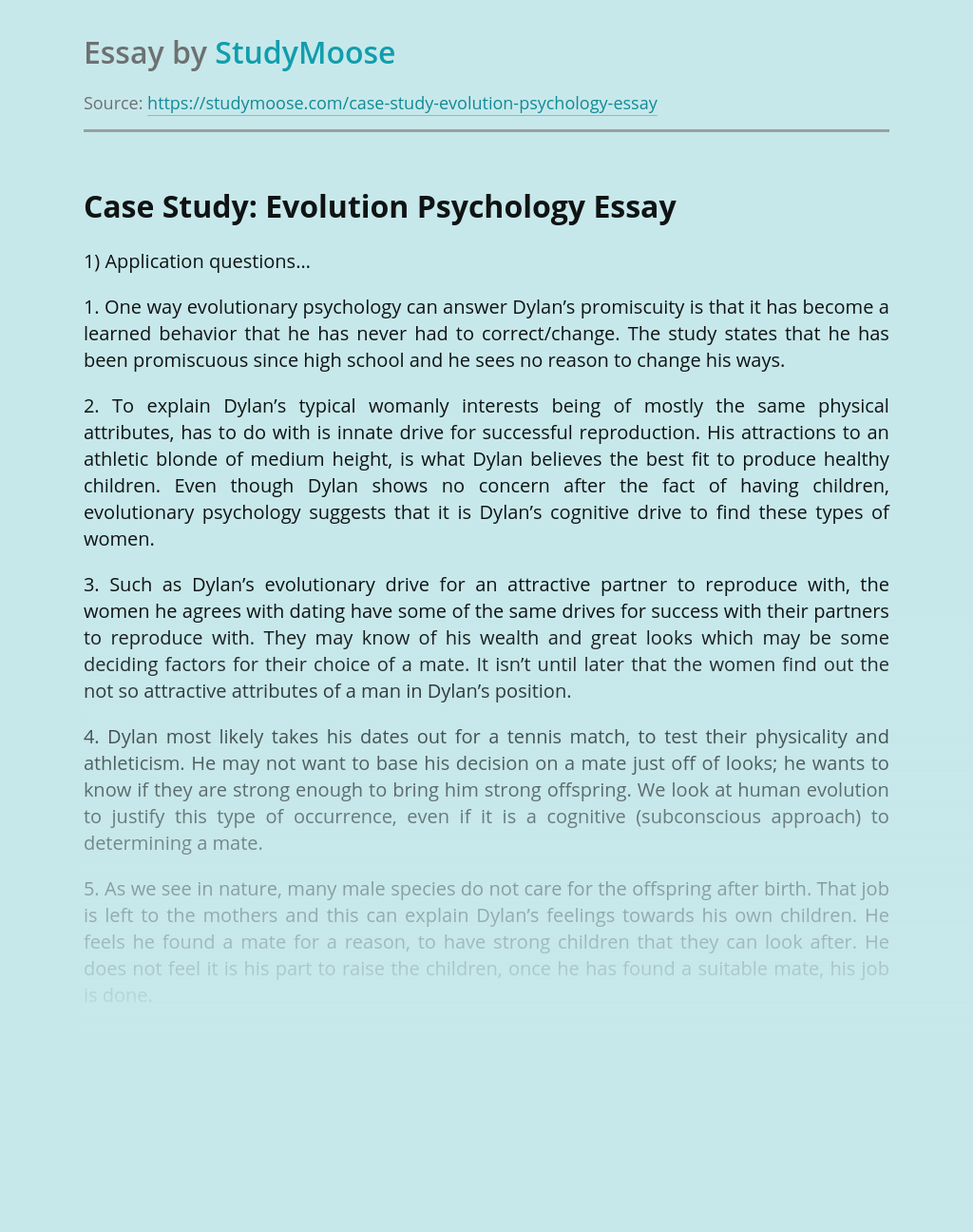 Turn in your highest-quality paper
Get a qualified writer to help you with
“ Case Study: Evolution Psychology ”
Get high-quality paper
Helping students since 2015
Stay Safe, Stay Original