Due to Crescent being Portland Drake Beverages’ (PDB) first entry into the U.S. sport/energy beverage market, there are some issues that PDB should consider with regard to Crescent’s impending launch. These issues consist of determining what customers want, being discussion-worthy and being transparent. Before launching Crescent it is essential to make sure that there is a place for Crescent in the market. Sarah Ryan, Vice President of Marketing for PDB, is doing this by trying to specify whether Crescent fits in the market better as an energy drink, a sport drink or a healthy organic beverage.

Being discussion-worthy is another important issue to consider because it is important to make sure Crescent’s product stands out against the various other energy/sport beverage companies that are coming out with their own products. By captivating your consumers with something discussion-worthy, you’ll foster organic word-of-mouth about your brand.

Being transparent is also a vital issue to consider because consumers have so many options on where to spend their money for sport/energy drinks.

Most energy drinks have higher energy, lower nutrition, lower hydration and lower favorable taste compared to sports drinks. Additionally, the largest group of energy drink consumers were males between the ages of 18-34. Also parents of children were more likely to consume energy drinks and the highest volume of drinks consumed was by respondents with a household income below $25,000 per year. For sport drinks, roughly half of men consumed them, while only a third of women did. Furthermore, although 40% of men found sports drinks refreshing, only 27% of females did. Sports drinks appealed to younger consumers, 62% of those between the ages of 18 to 24. Crescent’s best target is males and females between the ages of 18-35.

This is an advantage because sales of energy drinks with lower levels of caffeine and purer ingredients are rising due to consumer demand for healthier food and beverage choices. A disadvantage for positioning Crescent as an energy drink is that many potential consumers view energy drinks as unhealthy and might not see past that when PDB launches their new Crescent energy drink. Due to news stories highlighting the alleged health risks from energy drinks, 32% of consumers over 18 indicated they drank an energy drink in the last six months, 11% of who were drinking fewer energy drinks than they had a year earlier.

The advantages of positioning Crescent as a sport drink is that the market size is also increasing. The market increased 9% between 2007 and 2012. In 2012, sports drinks reached $6.3 billion in the United States and are expected to grow to $9.58 billion by 2017. Another advantage of positioning Crescent as a sports drink is that diet and low-sugar beverages, which did not exist before 2009, had grown by 33% between 2010 and 2012. The market size for diet and low-sugar sports drinks is expected to increase from $1.4 billion in 2012 to $2.97 billion in 2017.

This is perfect for PDB because the Crescent beverage is based on being a diet, low-sugar, and overall healthy option. The disadvantage of PDB positioning Crescent as a sports drink is the concern regarding rising childhood obesity rates resulting in government-mandated guidelines to remove high-calorie sugary drinks and snacks, including sports drinks, from school vending machines. This could be a negative impact on the amount of sports drinks young consumers buy, who make up a large portion of the sports drinks that are consumed.

The positioning strategy that I would select would be a healthy organic beverage. It is important to find what draws you apart from the competition and then advertise based on that. The target market that Crescent wants to attract are people who are health conscious and consumers who buy sugary energy and sport drinks aren’t going to be as health conscious. 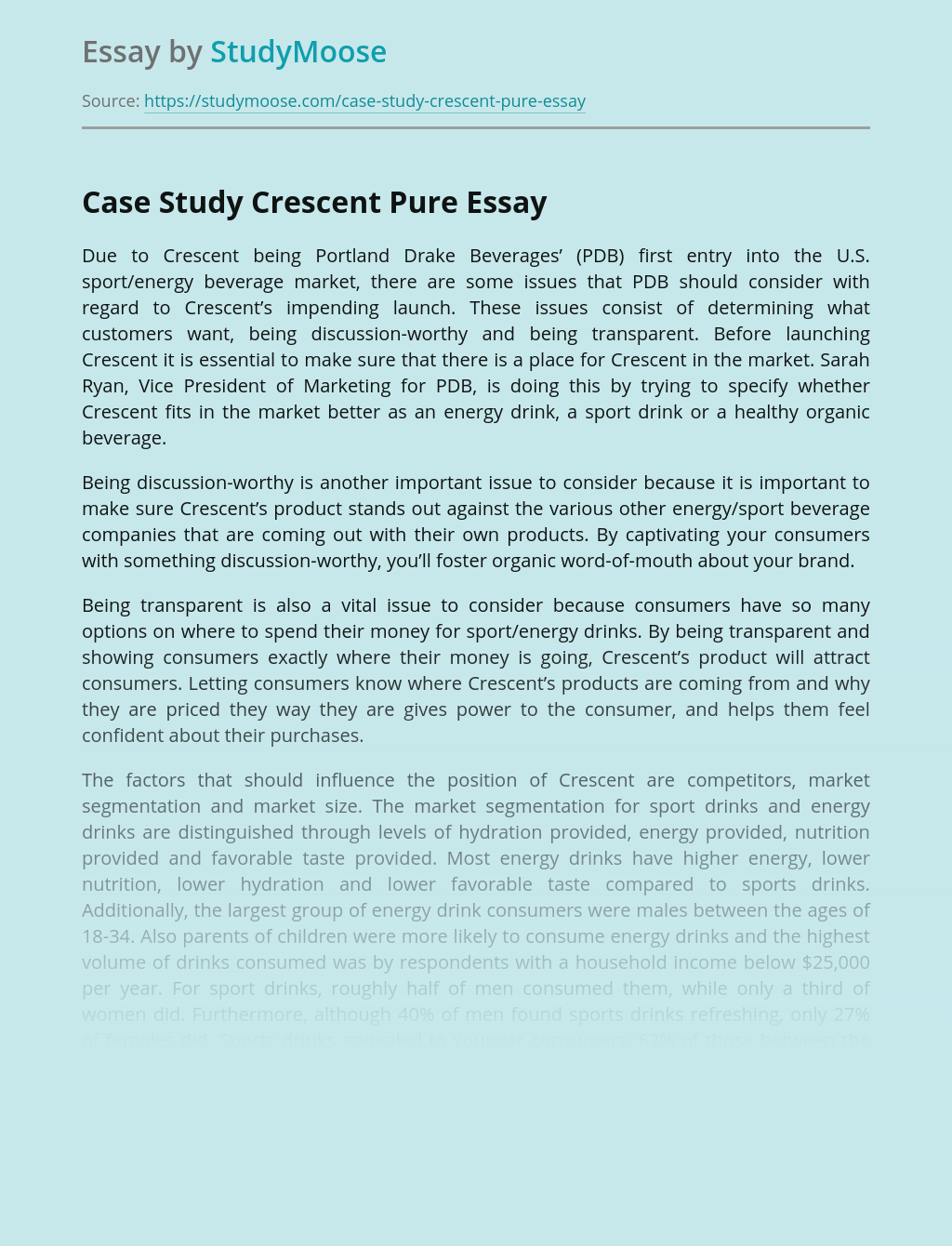