Barriers of communication are the complex of problems which appear during the conversation of people whose native language is different. Many years ago the problem did not exist, because people of different countries did not cooperate greatly and most people lived in the mono-linguistic communities. In the long run of time people all over the world started to travel, get education and work in other countries. Evidently, the importance of knowledge a foreign language is really great, because it solves many problems and opens wide opportunities.

Don't use plagiarized sources.
Get Your Custom Essay on Case Study : Barriers of Communication Just from $13,9/Page

For example, there are disorders which influence people’s ability to speak and they have to communicate with the help of gestures. Then, deaf people also have problems with communication, because they do not hear anything and can read information from gestures. Then, there are professional barriers of communication. For example, every profession possesses a list of specific terms which are understandable only for the people of the same occupation. There are many types of barriers of communication which make the life of people complicated. Students who decide to research the problem of barriers of communication should investigate the problem in detail and understand what the kinds and the reasons of this phenomenon, what factors cause the existence of these barriers. If one wants to research a particular example of communication barriers, he will need to read a lot about the chosen case to find trustworthy information about it. One will need to read books and periodicals where the case is mentioned to be able to analyze it and draw the right conclusions. Students should present the cause and effect of the problem, offer good solutions to the problem occurred in the case under investigation. There are many reasons why interpersonal communications may fail. In many communications, the message may not be received exactly the way the sender intended and hence it is important that the communicator seeks feedback to check that their message is clearly understood. The skills of Active Listening, Clarification and Reflection may help but the skilled communicator also needs to be aware of the barriers to effective communication. There exist many barriers to communication and these may occur at any stage in the communication process. Barriers may lead to your message becoming distorted and you therefore risk wasting both time and/or money by causing confusion and misunderstanding. Effective communication involves overcoming these barriers and conveying a clear and concise message. Some common barriers to effective communication include:

* The use of jargon. Over-complicated or unfamiliar terms. * Emotional barriers and taboos.
* Lack of attention, interest, distractions, or irrelevance to the receiver. * Differences in perception and viewpoint.
* Physical disabilities such as hearing problems or speech difficulties. * Physical barriers to non-verbal communication.
* Language differences and the difficulty in understanding unfamiliar accents. * Expectations and prejudices which may lead to false assumptions or stereotyping. People often hear what they expect to hear rather than what is actually said and jump to incorrect conclusions. * Cultural differences. The norms of social interaction vary greatly in different cultures, as do the way in which emotions are expressed. For example, the concept of personal space varies between cultures and between different social settings. A skilled communicator must be aware of these barriers and try to reduce their impact by continually checking understanding and by offering appropriate feedback.

Most people would agree that communication between two individuals should be simple. It’s important to remember that there are differences between talking and communicating. When you communicate, you are successful in getting your point across to the person you’re talking to. When we talk, we tend to erect barriers that hinder our ability to communicate. There are seven of these types of barriers to effective communication. 1. Physical barriers are easy to spot – doors that are closed, walls that are erected, and distance between people all work against the goal of effective communication. While most agree that people need their own personal areas in the workplace, setting up an office to remove physical barriers is the first step towards opening communication. Many professionals who work in industries that thrive on collaborative communication, such as architecture, purposefully design their workspaces around an “open office” plan. This layout eschews cubicles in favor of desks grouped around a central meeting space. While each individual has their own dedicated work space, there are no visible barriers to prevent collaboration with their co-workers. This encourages greater openness and frequently creates closer working bonds. 2. Perceptual barriers, in contrast, are internal. If you go into a situation thinking that the person you are talking to isn’t going to understand or be interested in what you have to say, you may end up subconsciously sabotaging your effort to make your point. You will employ language that is sarcastic, dismissive, or even obtuse, thereby alienating your conversational partner. Think of movie scenarios in which someone yells clipped phrases at a person they believe is deaf. The person yelling ends up looking ridiculous while failing to communicate anything of substance. 3. Emotional barriers can be tough to overcome, but are important to put aside to engage in conversations. We are often taught to fear the words coming out of our own mouths, as in the phrase “anything you say can and will be used against you.” Overcoming this fear is difficult, but necessary. The trick is to have full confidence in what you are saying and your qualifications in saying it. People often pick up on insecurity. By believing in yourself and what you have to say, you will be able to communicate clearly without becoming overly involved in your emotions. 4. Cultural barriers are a result of living in an ever shrinking world. Different cultures, whether they be a societal culture of a race or simply the work culture of a company, can hinder developed communication if
two different cultures clash. In these cases, it is important to find a common ground to work from. In work situations, identifying a problem and coming up with a highly efficient way to solve it can quickly topple any cultural or institutional barriers.

Quite simply, people like results. 5. Language barriers seem pretty self-inherent, but there are often hidden language barriers that we aren’t always aware of. If you work in an industry that is heavy in jargon or technical language, care should be taken to avoid these words when speaking with someone from outside the industry. Without being patronizing, imagine explaining a situation in your industry to a child. How would you convey these concepts without relying on jargon? A clear, direct narrative is preferable to an incomprehensible slew of specialty terms. 6. Gender barriers have become less of an issue in recent years, but there is still the possibility for a man to misconstrue the words of a woman, or vice versa. Men and women tend to form their thoughts differently, and this must be taken into account when communicating. This difference has to do with how the brain of each sex is formed during gestation. In general, men are better at spatial visualization and abstract concepts such as math, while women excel at language-based thinking and emotional identification. However, successful professionals in highly competitive fields tend to have similar thought processes regardless of their gender. 7. Interpersonal barriers are what ultimately keep us from reaching out to each other and opening ourselves up, not just to be heard, but to hear others. Oddly enough, this can be the most difficult area to change. Some people spend their entire lives attempting to overcome a poor self-image or a series of deeply rooted prejudices about their place in the world. They are unable to form genuine connections with people because they have too many false perceptions blocking the way. Luckily, the cure for this is more communication. By engaging with others, we learn what our actual strengths and weaknesses are. This allows us to put forth our ideas in a clear, straightforward manner. Communication is not a one-way street. To have others open up to you, you must be open yourself. By overcoming these barriers to communication, you can ensure that the statement you are making is not just heard, but also understood, by the person you are speaking with. In this way, you can be confident that your point has been expressed. Case study writing requires accuracy, creativity and well-developed analytical
skills. In order to cope with the assignment successfully, one will need a good example for writing. A free sample case study on physical barriers of communication will be a good source of data for every student, because experienced writers always research interesting questions and share their knowledge with young people. With the help of the Internet and free example case studies on barriers of business communication one will learn to compose properly-structured well-formatted papers of this type successfully. http://casestudyhub.com/case-study-on-barriers-of-communication/ – See more at: http://www.opin.ca/article/seven-barriers-communication#sthash.LMuGVzsq.dpuf 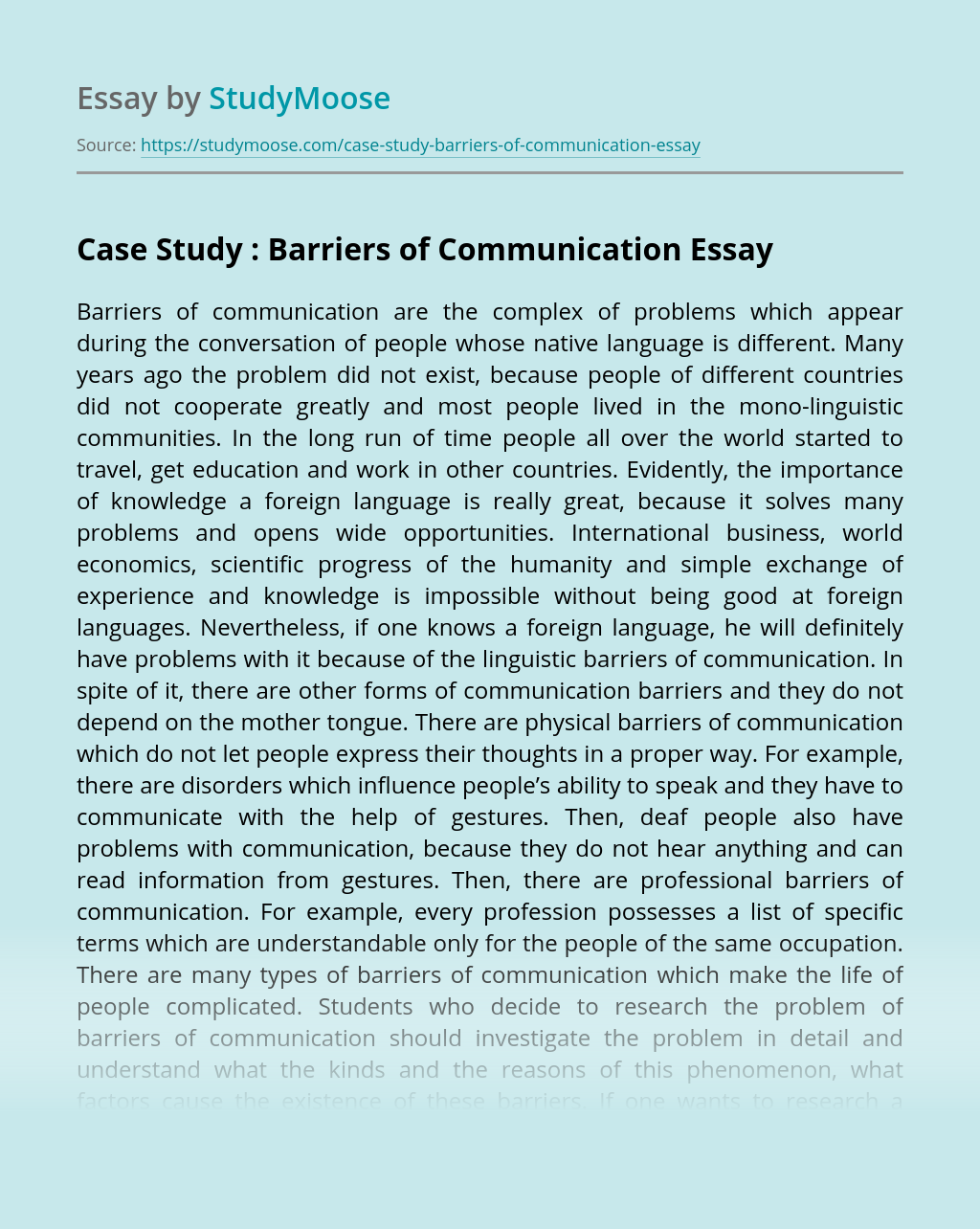 “Character is destiny” is a dominant theme that often appears in Shakespearean tragedy. In the play, King Lear this concept is portrayed through the characters of King Lear, Gloucester, and Edmund. The characteristics and the roles that each of the characters have within the society of the play determine the treatment that they receive from... VIEW ESSAY

View sample
Stuff is not salvation

Anna Quindlen’s “Things is Not Salvation” informs her experience and her view of consumerism of today’s time. She typically questions how individuals delight in consuming and are “mesmerized by low-cost consumer electronics and discounted toys.” I agree with her eye opening view points it even made me examination my own impulses. We don’t require materalistc... VIEW ESSAY

To identify and explain the processes which led to the formation of limestone in the areas of Bog Walk, Lluidas Vale, Ty Dixon and Moneague. Methodology On May 20, a group of 4th form Geography students from Meadowbrook High visited the different limestone areas of Lluidas Vale and The Ty Dixon Caves in St.Catherine, and... VIEW ESSAY

PAMBID, Bianca Angela M. 2J-MT The 1992 movie A Few Good Men contains many ethical conflicts with all the main characters. There are two main ethical dilemmas in the movie, one is with Tom Cruises character and the other is with Jack Nicholsons Character. The movie is about a young military layer named Lt. Kaffee... VIEW ESSAY

View sample
According the finding of previous literature Brandt 2011 Vergara