In spite of the rapid growth in both passengers the traffic and fleet during the oil boom of the 1970’s, thus making it the “largest airline in the Southern Hemisphere”, Garuda, as it was known then, had been plagued by a bad reputation as well as heavy losses year after year. Having been a member of Mr. Lumenta’s management team of Garuda since November 17, 1984, Mr. Soeparno had the opportunity to involve himself with the management in its efforts to develop and implement new strategies to turn around the airline, which posted a net loss of U.

Don't use plagiarized sources.
Get Your Custom Essay on Case Garuda Indonesia Just from $13,9/Page

He was therefore very pleased to see the company making a profit for the first time in more than a decade, to the tune of a modest rupiah 300 million (exhibit1). This result confirmed Mr. Soeparno’s confidence in the effectiveness of the policies adopted by Mr. Lumenta upon the latter’s appointment as President Director of Garuda in 1984.

As the newly appointed President of Garuda, Mr. Soeparno is caught in the middle of a dilemma of whether to continue Mr. Lumenta’s successful policies or to formulate a new set of policies which would enhance the company’s ability to deal with the challenges it may face during his term and beyond.

The weaknesses of their system were the manually produced passenger tickets and failure of reservation system.

Mr. Lumenta is a very hardworking and a responsible business man. He is a role model of the business industry, he find ways to settle the problems of the company, maintaining the stability the airlines is his one objective. Maintaining the stability of a company is not that easy, they encounter up’s and down. But in the case of the Garuda Indonesia they are the most prestige airlines in the country, they are the top among their competitors.

I have therefore conclude that the best solution to the problem is In every business, negative and positive feedback of customer is always there. It is one of the reasons why company’s relay’s on their feedback, to know what the other ways are their going to accomplish just to satisfy their customer wants. Satisfying customers is one of the important, because your business cannot stand alone without them. Through them your business will evolve. As a recommendation, in order for that your customer will be sincere in your company you should show nice treatment to him, always prioritize you customer and new offers or new environment is one of the reason why customer is always constant to your company. 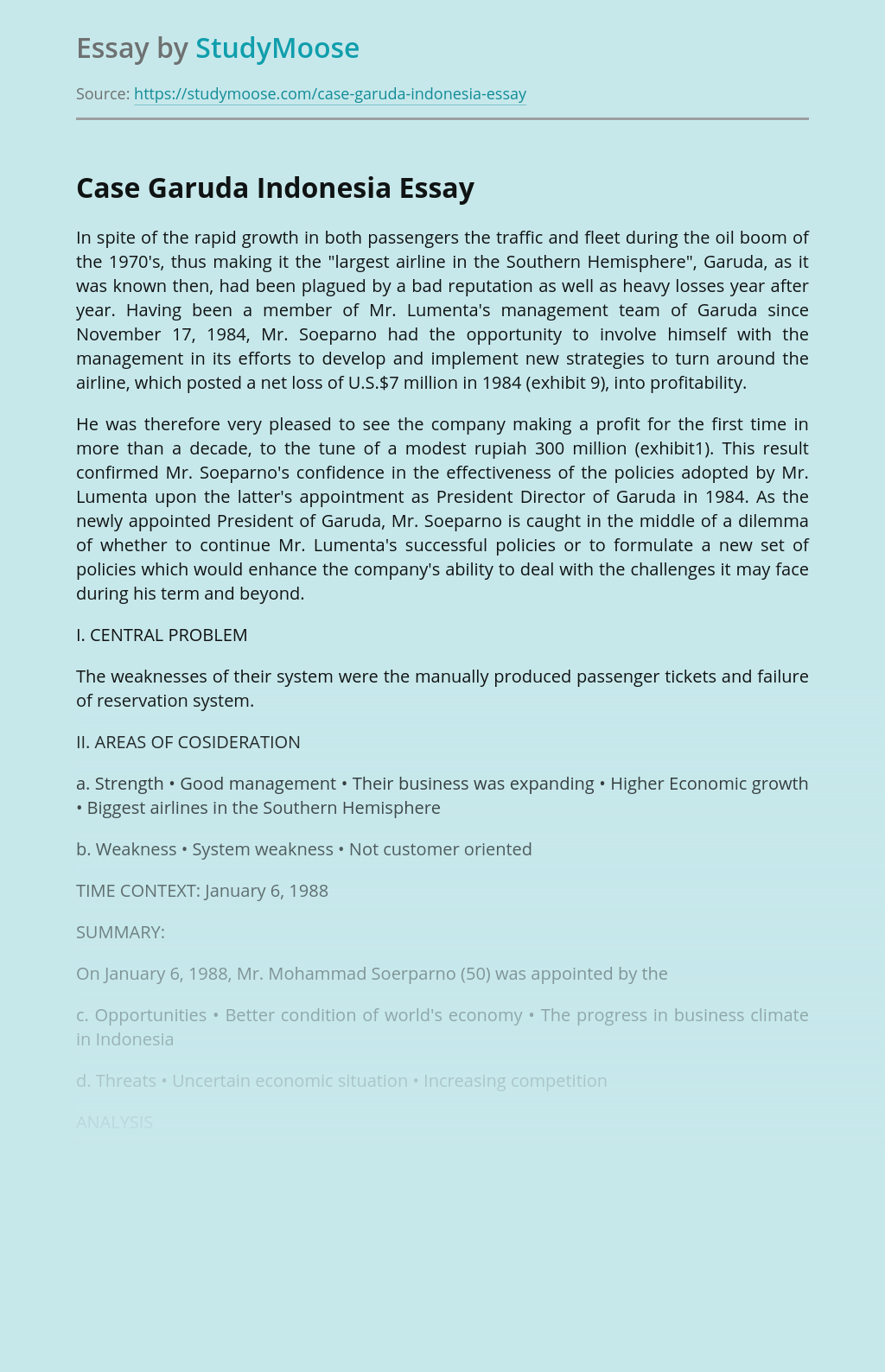 The Mission Of Southwest Airlines

Rate this post The mission of southwest Airlines is dedication to the highest quality of Customer Service delivered with a sense of warmth, friendliness, individual pride and Company Spirit (Ruppel, 2012). The people of Southwest are the single greatest strength and most enduring long term competitive advantage (Kelly, 2012). Southwest Airlines started out as Air...

Rate this post Airways Limited which from 1940 has been operating Short Empire flying boats on trans-Tasman routes. Tasman Empire Airways Limited has operated flights in world war II weekly from Auckland to Sydney and also added Fiji and Wellington to its route. In 1953 New Zealand and Australian governments purchased 50% stakes in Tasman...

Rate this post Introduction Cathay Pacific Airways is an international airline registered and based in Hong Kong, offering scheduled cargo and passenger services to over 80 destinations around the world. They are deeply committed to Hong Kong, where the Company was founded in 1946. They continue to make substantial investments to develop Hong Kong’s aviation...

Operation and Strategy management for Ryanair

Rate this post Introduction The company chosen in this report is Ryanair in the airline industry. Ryanair is a low cost budget airline travelling across 1600 routes from 57 bases connecting 180 destinations in 29 different countries (Ryanair.com). Ryanair first started its operations in 1985 between Ireland and London. The first year it commuted around...

Rate this post Executive Summary The following paper provides an analysis and evaluation of the current market position of Qantas and the airline industry. By assessing the company both internally and externally by applying PESTLE and Porter’s Five Force frameworks, this report will assess Qantas’ opportunities and strengths within the aviation industry. In addition to...