Case Study 3: Estimating the Cost of Capital
1. Currently Teletech Corporation (TC) uses a single hurdle rate for both their Telecommunications Services (TS) and Products and Services (P&S) divisions. This hurdle rate obtained by an estimate of TC Weighted Average Cost of Capital (WACC), which is calculated at 9.3%. When analyzing critically at this point, TS is underperforming with a return on capital (ROC) of 9.1%, whereas, P&S segment is well over the required rate of return as it is gaining a ROC of 11.

Don't use plagiarized sources.
Get Your Custom Essay on Case 15: Teletech Corporation, 2005 Just from $13,9/Page

As a result, the firm’ share price is inactive. Their price-to-earning is far below investor’s expectation in comparison to the firm’s risk. The use of a single constant hurdle rate brings about an uncorrelation between risk and return. With an approx. $2 billion being invested in the upcoming years, the discount rate is significantly important in order to make investment decision on profitable projects, that will increase shareholder’s value. 2. Estimate the segment WACCs for Teletech:

3. It seems that TS is actually profitable on a risk-adjusted basic, even though it is underperforming compared with the firm hurdle rate. The reason behind is the current use of constant hurdle rate does not mirror the higher cost of debt required for P&S, and shows that the cost of equity required for TS will not have sufficient capital in the future but P&S will be given more than enough because TS’ return is less than P&S. It also indicates that TS certainly is less risky than the company and therefore it should be provided adequate funds in the long run.

4. In term of “economic value”, all money is green. Teletech having a book value of $16 million, they would fit the profile no matter it is under two segments its return on capital is viewed as one whole part. Investors are only concerned with the company as the whole, rather than its individual segments. The implication of that view is to let investors deeply understand that Teletech will still have return at the hurdle rate despite the fact that P&S is less profitable than TS. The return is being produced for shareholders are clearly dependent on where Teletech invests its fund.

The argument in favor is that the returns on capital of the two segments complied into Teletech hence, it is practical to keep all capital contributions at the firm should be treated individually. The argument against this statement is that the decision might be wrong if the use of strategic consideration is not included. The use of single hurdle rate will make the NPV results consistent but the NPV as well as the economic profit estimations would lose their meaning and comparability across TS and P&S.

The separation of using different hurdle rates will make Teletech’s return higher. 5. If all the firm’s assets were invested only in the telecommunication segment the firm would increase the total risk as the lack of diversification on multiple investments. From another point of view, currently Teletech is using a constant rate to determine the projects and this rate is used as the discount rate. If the hurdle rate is set constantly at 9.3%, return on capital of TS (8.5%) is far lower than the hurdle, it seems like TS will reduce the firm’s value. While the return on capital of P&S (11.4%) exceeds the hurdle, it means P&S will enhance the firm’s value.

In fact if the use of individual hurdle rates applied, it will generate a large positive economic profit from TS ($37.66 million), PS still remains profitable but it is far below the original economic profit that calculated by using the constant hurdle rate. 6. From the calculations above in part 5, P&S will contribute extra value ($25.54 million) to Teletech as the term “all money is green” because P&S’ actual return is up to 11%, which is, lightly exceeded the hurdle rate of 10.41%.

7. There is no conflict with holding two seats on Teletech’s board of directors as he demanded, but the initial purpose of business is to provide firm’s customers the best goods and services, that will make Teletech to become the best telecommunication service.

The firm will have to generate the best possible return, maximize the shareholder’s wealth, maintain the heavy development in both expansions of range as well as increase in customer’ satisfaction. So far, each segment has shown clear evidences and signs that they have been being brought value to Teletech, therefore Teletech have to decide to treat both TS and P&S like individual firms in the uses of equity and debt for a long run benefit. 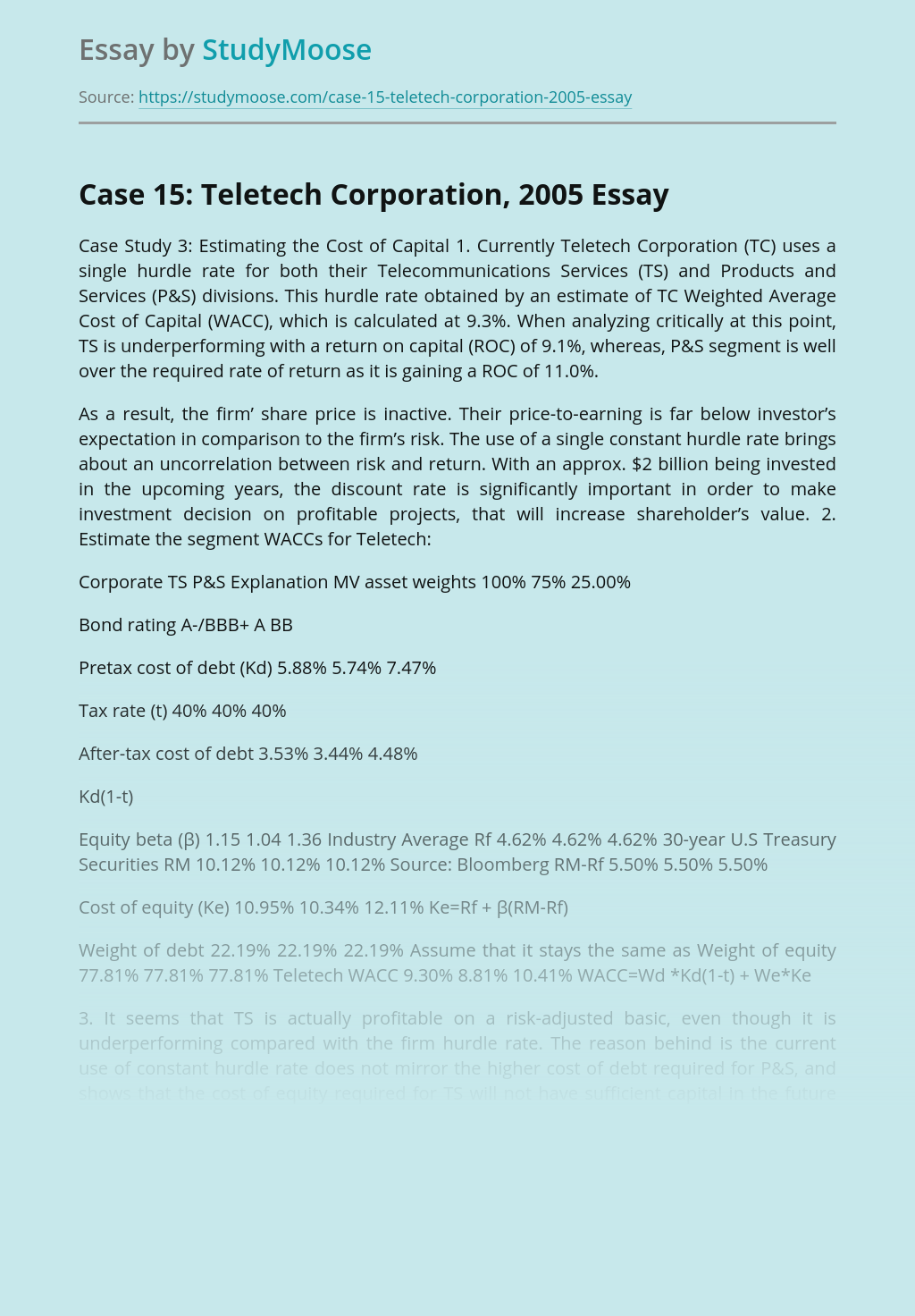 1. Find appropriate place with a good environment to conduct negotiations. 2. Talk to both parties to identify their specific issues that need solving, identify what is going to be needed to find solutions in the short and long term. Take note of each parties information related to issue at hand which can be used... VIEW ESSAY

Question 1 – Do you see the selection of Directors at Manfold Toy’s as entirely suitable to an ethical standing? Why? Many relevant corporate governance issues arise regarding the composition of Manfold Toy’s board of directors. With respect to the main purpose of a board of directors, we need to reflect on whether the elected... VIEW ESSAY