Cars speed down the narrow, empty street as people walking by, trying to get by, have near misses every day. John wound down the car window and immediately caught the foul stench of rotting garbage and urine. This was where he belonged. This was home, he thought. As he drove past, he saw children in a park playing with police cars and little people. If only life was that easy.

He remembered times like that, carefree times. But those were gone.

Don't use plagiarized sources. Get your custom essay on
“ Cars speed down the narrow empty street as people walking by trying ”
Get custom paper
NEW! smart matching with writer

He heard shouting and snapped back into reality, reeling from the thoughts, from the memories. The shouting he heard came from his right, from the apartments. He pulled over into a small alleyway and listened closely. There were two voices, a man, angry in his tone, and a woman, arguing back. He knew how these usually ended, the fight escalates and then· and then·

He knew he had to step in. He heard the two voices faintly at about the third or fourth floor.

He turned off the ignition and was about to step out when a burst of static crackle jumped out from the radio. He turned around and tuned it till he heard a man’s voice. It was one of his fellow officers, Todd if he was correct. “We need all the units in the area to come to 51st street for a hostage situation repea-” John turned off the radio, that was all he needed to hear.

He reached for the key to start the engine but hesitated.

What about the two above him, what could happen? He judged both situations and pulled out of the alley, fast. He knew this was wrong, but cases of domestic violence get filed every day, and one wouldn’t change that.

He sounded the siren and sped past the streets and alleys, looking coldly straight ahead.

He reached his hand up and wiped a bead of sweat off his forehead.

John arrived at the scene as fast as he could and pulled up to about 8 other police cars. He switched off the siren and stepped out. A crowd gathered and the police officers on scene held them back, barely. John looked around him and spotted his captain, Howard Travis. John walked up to him and asked him where the chief was. Howard froze and then straightened up. “The chief was always ignorant·” He trailed off, staring at nothing. John stood like a wall until the captain began.

“The chief radioed me before he approached them” He cleared his throat. “He saw them early on, before the kidnapping. They were apparently having coffee together but then they went to an alley and the chief followed. They were arguing about something, che-” “Cheating.” John said. “Yes, after that I don’t know much but people heard a gunshot and called it in. The med crew came but he was already gone, a shot to the chest and one to the shoulder. He bled to death and we know that the man has a gun to the hostage’s head so we can’t make any moves” John thought for a while. “Do we have a motive, any reason why he would shoot?” “Right now, that’s all the information we have about this which will make negotiating har-” He stopped and realised. He looked at John with wide eyes “We aren’t going to negotiate·” he quivered. John grabbed Howard by the shoulders and looked at him “Besides us, is anyone else coming to the scene?” “HQ told me that a negotiation team was coming but I never thought anything about it, it’s just protocol.” John turned around and walked away “What are you doing?” The captain called out behind him. John stopped for a moment “What needs to be done,” He continued on “Without casualties·” he whispered under his breath

Cars speed down the narrow empty street as people walking by trying. (2019, Dec 18). Retrieved from https://studymoose.com/cars-speed-down-the-narrow-empty-street-as-people-walking-by-trying-example-essay 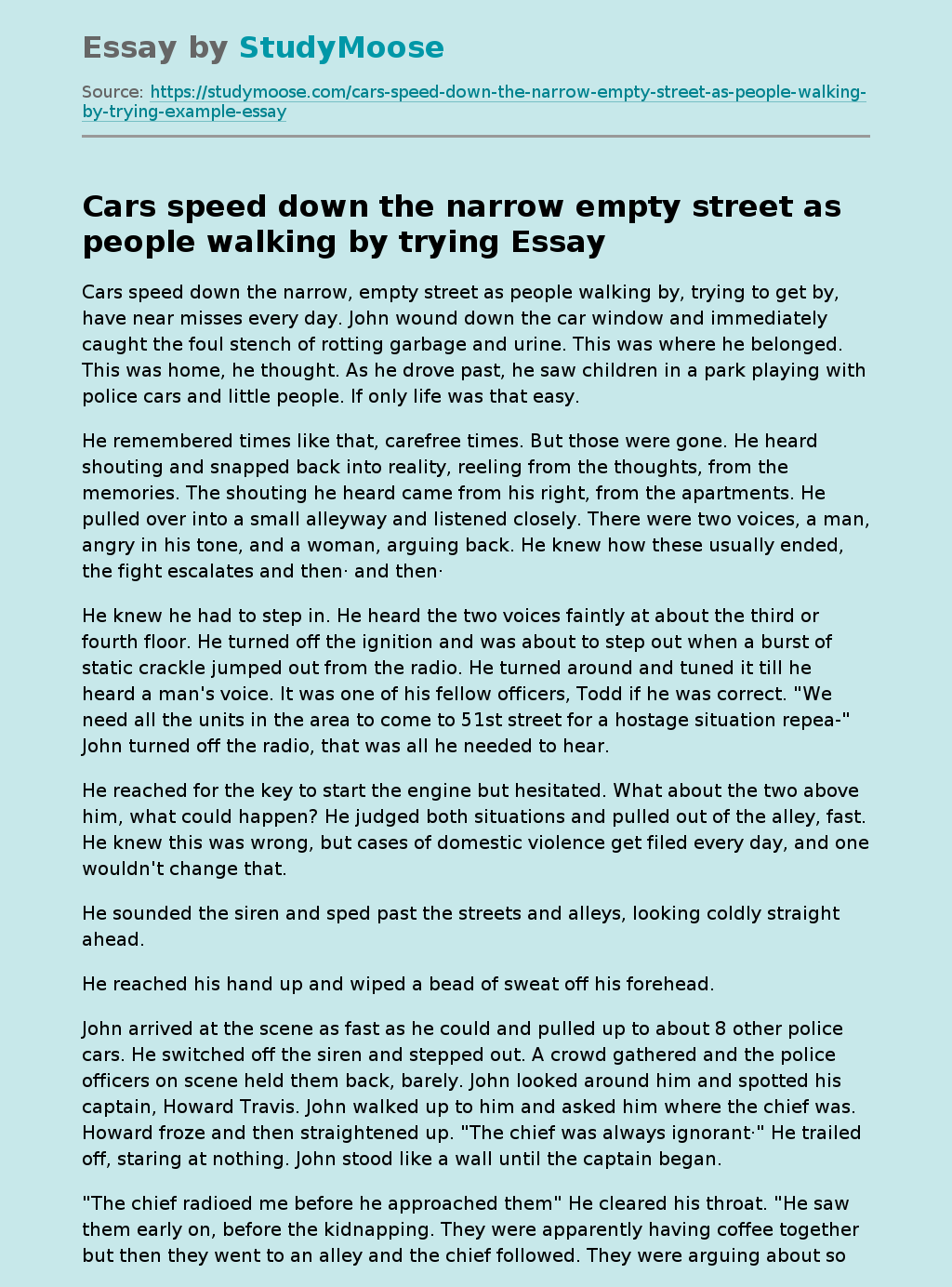