Carrie Willow is one of the main characters in Nina Bawden’s Carrie’s War. She has green eyes, long dark hair and is fairly short. She is twelve years old and is a world war two evacuee. She has a younger brother, Nick who she is very protective over, “He’s only a little boy, he didn’t see it as stealing.” She was evacuated from London to shelter from the war. They were forced out of their own home and sent, along with many other children, to Wales out of harms way.

After a shaky start to life in Wales, they realise it isn’t as bad at they first feared.

Carrie and Nick are chosen to live with a man named Mr Evans and his sister Louisa. At first they find it hard to settle in, “I hate it here and I hate Mr Evans.” But they discover more to life in Wales when they come across the mysterious Druids Bottom and they soon change their mind and realise that evacuation is not so bad after all.

When they have to go home, they find it hard to leave their new friends behind. “In a way I’d rather stay here than go to Glasgow.” Without Carrie in the story Carrie’s War would change a lot. She is the main character and most of the story revolves around her. It would be a much different book without Carrie Willow in it.

Carrie is only twelve so she doesn’t have a job, but she does help out in Mr Evans’ shop.

Carrie meets many new people in this story, including the family at Druid’s Bottom which includes Hepzibah and Albert. Hepzibah is very kind toward Carrie and treats her and Nick the same, which pleases Carrie. Deep down I think Carrie is a bit cautious of Hepzibah, ever since Albert told her that Hepzibah was a witch. Albert is a good friend to Carrie; however I think he has a bit of an edge to him. He is very quick to judge people “you told Mr Evans didn’t you” and I think that is his downfall. Carrie doesn’t seem to mind too much though.

My first impressions of Carrie are that she hides her own feelings and just gets on with things. “She cried a little in private.” I think she is trying to stay strong for Nick’s sake and doesn’t want him to know that she is as equally as scared as him about evacuation. This shows that Carrie is a kind sister, who puts others before herself. Carrie is also very critical of herself and normally puts herself down “Nicks the pretty one really” she isn’t used to getting compliments and doesn’t believe the one that she does get. This shows that Carrie isn’t very confident and doesn’t have much self belief. This tells us a lot about Carrie character; that she is slightly in Nick’s shadow. As the story goes on I think Carrie comes out of her shell and learns to be more confident in herself. I still think she is easily hurt “she wanted to cry suddenly” and still tries to hide her feelings “nothing it’s nothing really I’m fine” but I think by the end of the story Carrie has much more self belief and doesn’t put herself down as much. 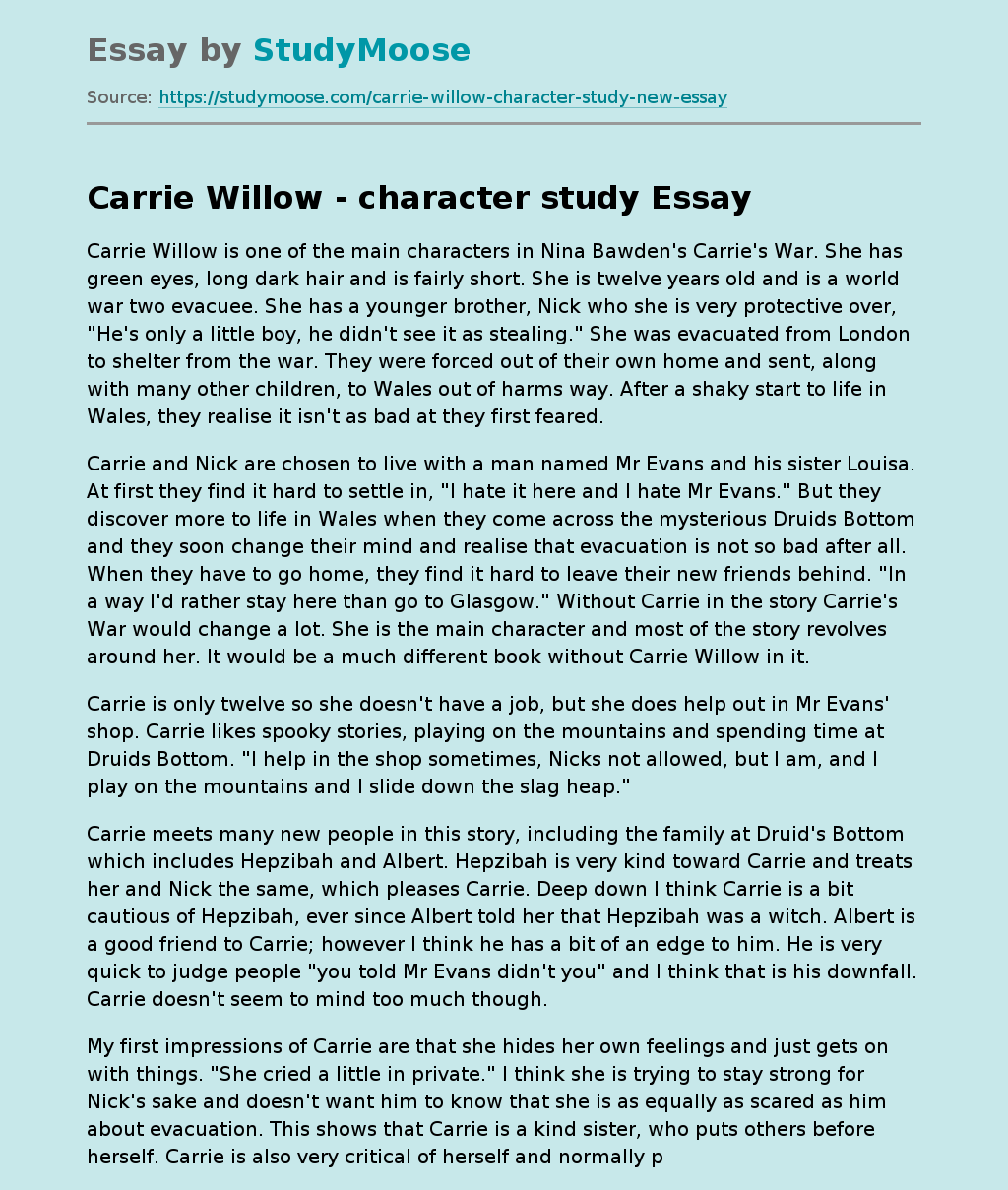