APUS, Section 4 Mr. Gordinier January 8th, 2013 All situations and topics have multiple views and perspectives to them. A paradox exhibits contradictory aspects in which there is not either a single good or a bad, positive or negative. In The Artificial River The Erie Canal and the Paradox of Progress, 1817-1862, written by Carol Sheriff, there are many different examples of paradoxes. Towns initially saw the Canal having a negative impact on them, but realized it could help. The Canal provided for faster transportation, but in the case of a crash would take a long time to recover from.

Turn in your highest-quality paper
Get a qualified writer to help you with
“ Carol Sheriff’s The Artificial River ”
Get high-quality paper
NEW! AI matching with writer

Also businessmen benefitted from the Canal, but other lost a lot of money because of it. The Canal provided dramatic change to the upstate New York area. In some cases this change resulted in prosperity and in others it resulted in failure and loss. At the time prior to building the Canal many negative impacts were the only things being considered. In 1826, a Canal Board was set up to deal with many of these complaints and problems.

Most of the agreements and compromises were expressed through contracts made between the Canal Board and the people of the towns. Individuals questioned the right to take land to build the canal, water resources being used, and also commercial structures being built along the Canal. The thought of how much these commercial structures could drastically benefit these towns were not contemplated. When the Canal was built towns all along the route from Buffalo to Albany prospered from the revenue and the attraction the Canal brought with it.

Whether the Canal was being used for business people, immigrants, settlers of the region, or tourists, the border-towns all had some appeal to these persons. After some time the state was continually asked to expand the Canal from the original route to include connecting canal routes.

However, the same towns along the route from Buffalo to Albany had already been established along the lines of the original canal. These towns would need to be relocated in order to obey these new requests. This presented a major problem because the people in these towns had formed a life around the Canal and many of them made their income based of the Canal. The inhabitants of the towns changed their mentality from not wanting the Canal to invade on their lives, to it being an essential part of their lives they depended upon. The Erie Canal provided an extremely fast source of transportation compared to other ones of that time.

A lot of the land that the Canal went through was uninhabited and therefore people weren’t able to move through these areas. Once the Canal was built it served as that pathway through these areas. The Canal also was a much cheaper source of transportation that was used by residents, tourists, emigrants, and workers during this time. Evangelical preachers used the artificial river to seek salvation among these people. Also the Canal helped to serve as an underground railroad, transporting slaves from Syracuse to Buffalo, near the Canadian border (Sheriff 53).

The Canal not only sped up transportation, but also cost much less for goods to be delivered. Before the Canal goods from Albany to Buffalo would increase to five or six times their actual value just because of transportation. This helped business prosper and served as a positive aspect for the Canal. Although transportation was faster if a boat along the Canal crashed it would hold things up for a long time. A boat crashing had a chain effect on other boats because they then would be slowed down as well. People would not get where they needed to be on time was well as goods. A lot of the times if a boat did crash the goods were not able to be salvaged and hurt the business that owned them. There was also the issue of passing under bridges and how low they were.

In a play of William Dunlap the brother of Amelia describes the inconvenience this was saying “In constant dread of lifting your head above your knees for fear of having it knock’d off your shoulders by a bridge” (Sheriff 55). Inconveniences such as these eventually encouraged travelers to find a different source of transportation; the railroad. The railroad had advantage over the Canal in the fact that it could run all year round. Individuals took advantage of the Canal and used it to help themselves gain profit. Businessmen and entrepreneurs saw the Canal as an opportunity to make money.

Some bought their own boats and turned them into their business place. Boats were transformed to stores and markets in which people would buy off of them. Business was not only done on the Canal, but other men would use all the people, especially tourists, and try to sell consumer goods to them. A lot of times these vendors would scam people buying from them.

They would sell fake remedies with false claims. Many times they would also trade counterfeit bills for items of actual value. The Canal helped solo merchants in a way that had never been done before. On the other hand the Canal was also very detrimental to many people as well. The people it affected were those whose land and water supply it had taken. When the Canal was built it ruined early settlers property such as the Archbalds. Frequently properties were cut in half. Once water was let into the Canal it caused a number of problems. Majorly because of poor workmanship and laziness water would stream out of the Canal and into farmers’ land. Fields and basements would be flooded, livestock would be injured, and gardens would be damaged. Also the workers feet would trample over fields, showing no regard or carefulness of their surroundings.

One farmer claimed that workers torn down his fence simply for their own amusement. Without a healthy stock of crops the farmers would not make as much money and financially were negatively affected by the Canal. The Erie Canal had widely varying results on the people it impacted. Businessmen and entrepreneurs received financial success through the Canal while farmers and people already established along the lines of the Canal seemed to be negatively affected by it. There is no question transportation was faster and cheaper than any other source around that time. Communities and towns both benefitted from the Canal being around them. Initially there was a great amount of hype surrounding the Canal and all this hype brought people. Businesses thrived off these tourists and newcomers. Positives and negatives came from the opening of the artificial river that would change history forever. 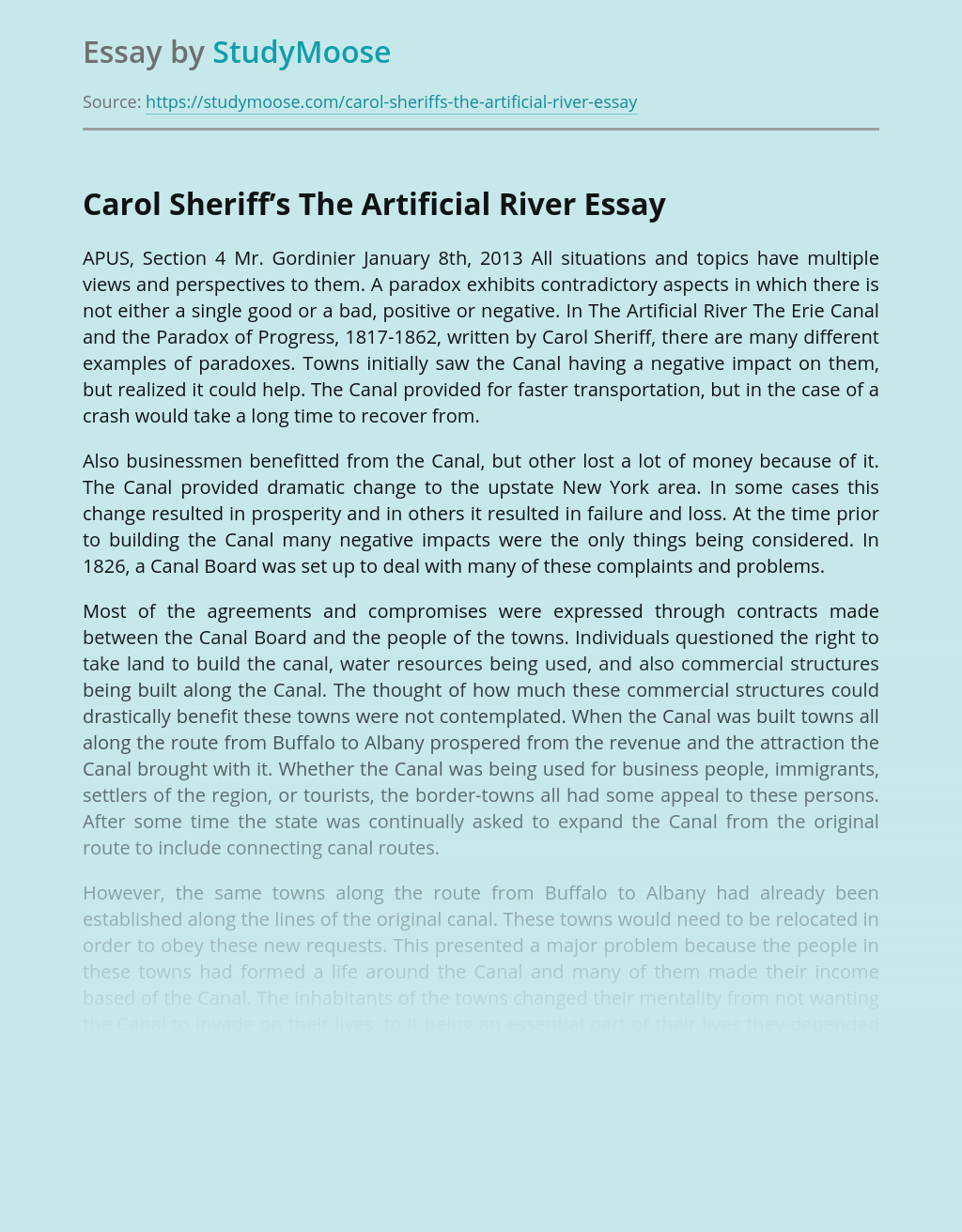 Turn in your highest-quality paper
Get a qualified writer to help you with
“ Carol Sheriff’s The Artificial River ”
Get high-quality paper
Helping students since 2015
Stay Safe, Stay Original