The poem is written as an exploration of changing from having innocence to experience, the process of growing up. It consists of two stanzas of 8 lines followed by two stanzas of 7 lines. Throughout the poem there is a significant change, and leads to the poem’s topic which is change. This links to childhood suddenly changing into a memory as it is the process of growing up; which gradually includes a loss of innocence. The first word in the first stanza is “You”, which is addressing the reader, causing them to feel involved as it is in second person narration.

The poem starts with the topic of travel.

Perhaps that journey symbolizes the journey through life; A life that is full of different countries, which leads to new experiences. Also it could be told that the child loved Mrs Tilscher’s class due to the fact that every single detail (country) is remembered. The word chanted has been mentioned which meant that the class felt magical for the child.

“That for an hour, then a skittle of milk” indicates the use of metaphor due to the bottle’s shape as that of a skittle, which can refer to an indication of enjoyment and pleasure from the children, thus is a characteristic every aspect of primary school life.

“And the chalky pyramids rubbed into dust. ” adds symbols of the ancient buildings, which could be controllable in the hands of the teacher, being able to draw and destroy the pyramids, rubbing them into dust.

This is used to give a sense of security and safety in the eyes of the students. “A window opened with a long pole; the laugh of a bell swung by a running child” is a personification as the child is the one supposed to be laughing but instead it is mentioned that the laugh was made by the bell. “This was better than home.

Enthralling books. The classroom glowed like a sweet shop. ” Contains a simile, because it captures the sense of pleasure and delight associated with the classroom. Since children like sweetshops therefore it implies that they love the classroom, and it’s full of things that they want to get, through use of sugar paper and colored shapes. “Sugar paper. Coloured shapes. Brady and Hindley faded, like the faint, uneasy smudge of a mistake” Contains juxtaposition, which is a dramatic effect as it involves two opposite images.

This shows the reader a comparison of the classroom as a safe peaceful place comparing to the real world and the grim reality of outside the classroom. The faint indicates that being in the classroom, the place of sugar people and colored shapes made Brady and Hindley irrelevant. They became, through the simile, like a smudge; meaning they were still there, but it was no longer fully real. The next line starts of with “Mrs Tilscher loved you. ” Which indicates a direct and clear statement showing how Mrs Tilscher loved all the students in the class and made them feel loved.

“She’d left a good gold star by your name. The scent of a pencil slowly, carefully, shaved. A xylophone’s nonsense heard from another form. ” Shows multisensory details, such as sight from seeing the gold star, the smell coming from a pencil, and the sound coming from a xylophone. Every sense is being used in the class of Mrs Tilscher. The xylophone has been indicated as a nonsense possibly because the xylophone was interrupting Mrs Tilscher’s class which the child did not obviously want; which thus shows how much the child loved Mrs Tilscher’s class. 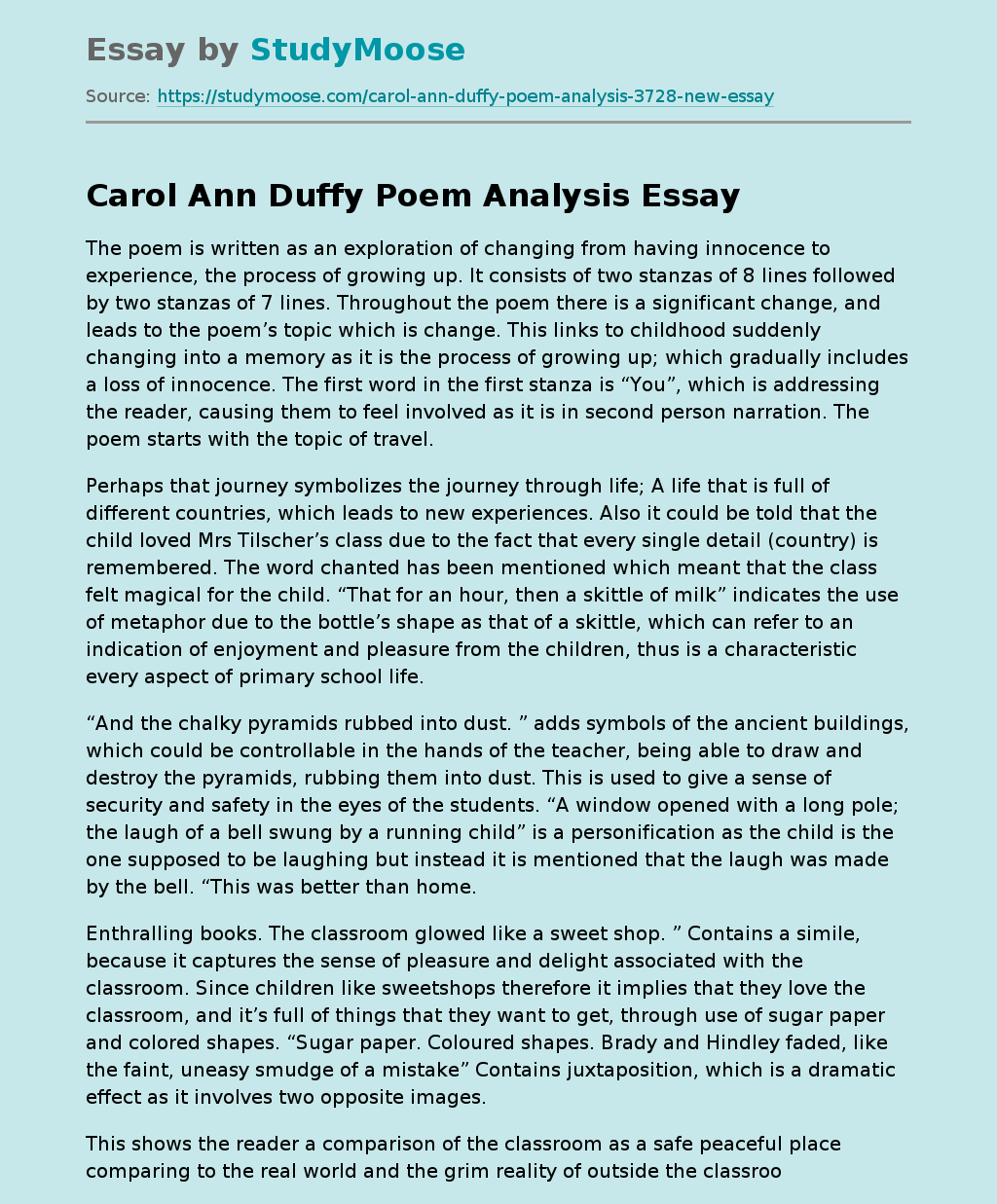