PROPOSITION 1: HUMAN EXPERIENCE AT ACONCIOUS AND UNCONCIOUS LEVEL Every individual exists in a continually changing world of experience of which he is the centre.

PROPOSITION 2: HUMAN PERCEPTION
The organism reacts to the field as it is experienced and perceived. This perceptual; field is, for the individual, reality.

PROPOSITION 3: WHOLENESS
The organism reacts as a whole to this phenomenal field.

PROPOSITION 4: SELF-DETREMENATION
The organism has one basic tendency and striving – to actualize, maintain, and enhance the experiencing organism.

Don't use plagiarized sources. Get your custom essay on
“ CARL ROGER’S19 propositions ”
Get custom paper
NEW! smart matching with writer

PROPOSITION 5: NEEDS AND BEHAVIOUR
Behaviour is basically the goal-directed attempt of the organism to satisfy its needs as experience, in the field as perceived.

PROPOSITION 7: FRAME OF REFERENCE
The best vantage point for understanding behaviour is from the internal frame of reference for the individual himself.

PROPOSITION 8: THE SELF
A portion of the total perceptual field gradually becomes differentiated as the self.

PROPOSITION 9: THE SELF AND SIGNIFICANT OTHERS
As a result of interaction with the environment, and particularly as a result of evaluational interaction with others, the structure of self is formed – an organized, fluid, but consistent conceptual pattern of perceptions of characteristics and relationships of the “I” or the “me” together with values attached to these concepts.

PROPOSITION 11: DEALING WITH EXPERIENCES AT CONCIOUS AND UNCONCIOUS LEVEL As experiences occur in the life of the individual, they are either (a) symbolised, perceived, and organized into some relationship to the self, (b) ignored because there is no perceived relationship to the self – structure, ( c ) denied symbolisation or given a distorted symbolization because the experience is inconsistent with the structure of the self.

PROPOSITION 12: SELF AND BEHAVIOUR
Most of the ways of behaving which are adopted by the organism are those which are inconsistent with the concept of self.

PROPOSITION 13: BEHAVIOUR AND UNCONCIOUS EXPERIENCES
Behaviour may, in some instances, be brought about by organic experiences and needs which have not been symbolized. Such behaviour may be inconsistent with the structure of the self, but in such instances the behaviour is not “owned” by the individual.

PROPOSITION 14: PSYCHOLOGICAL TENSION
Psychological maladjustment exists when the organism denies to awareness significant sensory and visceral experiences, which consequently are not
symbolised and organized into the gestalt of the self-structure. When this situation exists, there is a basic or potential psychological tension.

PROPOSITION 15: RECONSTRUCTION OF SELF
Psychological adjustment exists when the concept of the self is such that all the sensory and visceral experiences of the organism are, or may be, assimilated on a symbolic level into a consistent relationship with the concept of self.

PROPOSITION 16: DEFENCE OF SELF
Any experience which is inconsistent with the organization or structure of self may be perceived as a threat and the more of these perceptions there are, the more rigidly the self-structure is organized to maintain itself.

PROPOSITION 17: CONDITIONS FOR CHANGE
Under certain conditions, involving primarily complete absence of any threat to the self structure, experiences which are inconsistent with it may be perceived, and examined, and the structure of self revised to assimilate and include such experiences.

PROPOSITION 18: ACCEPTANCE OF SELF When the individual perceives and accepts into one consistent and integrated system all his sensory and visceral experiences, then he is necessarily more understanding of others and is more accepting of others as separate individuals.

PROPOSITION 19: DEVELOPING YOUR OWN VALUING PROCESS
As the individual perceives and accepts into his self-structure more of his organic experiences, he finds that he is replacing his present value system – based so largely upon introjections which have been distortedly symbolized – with a continuing organismic valuing process. 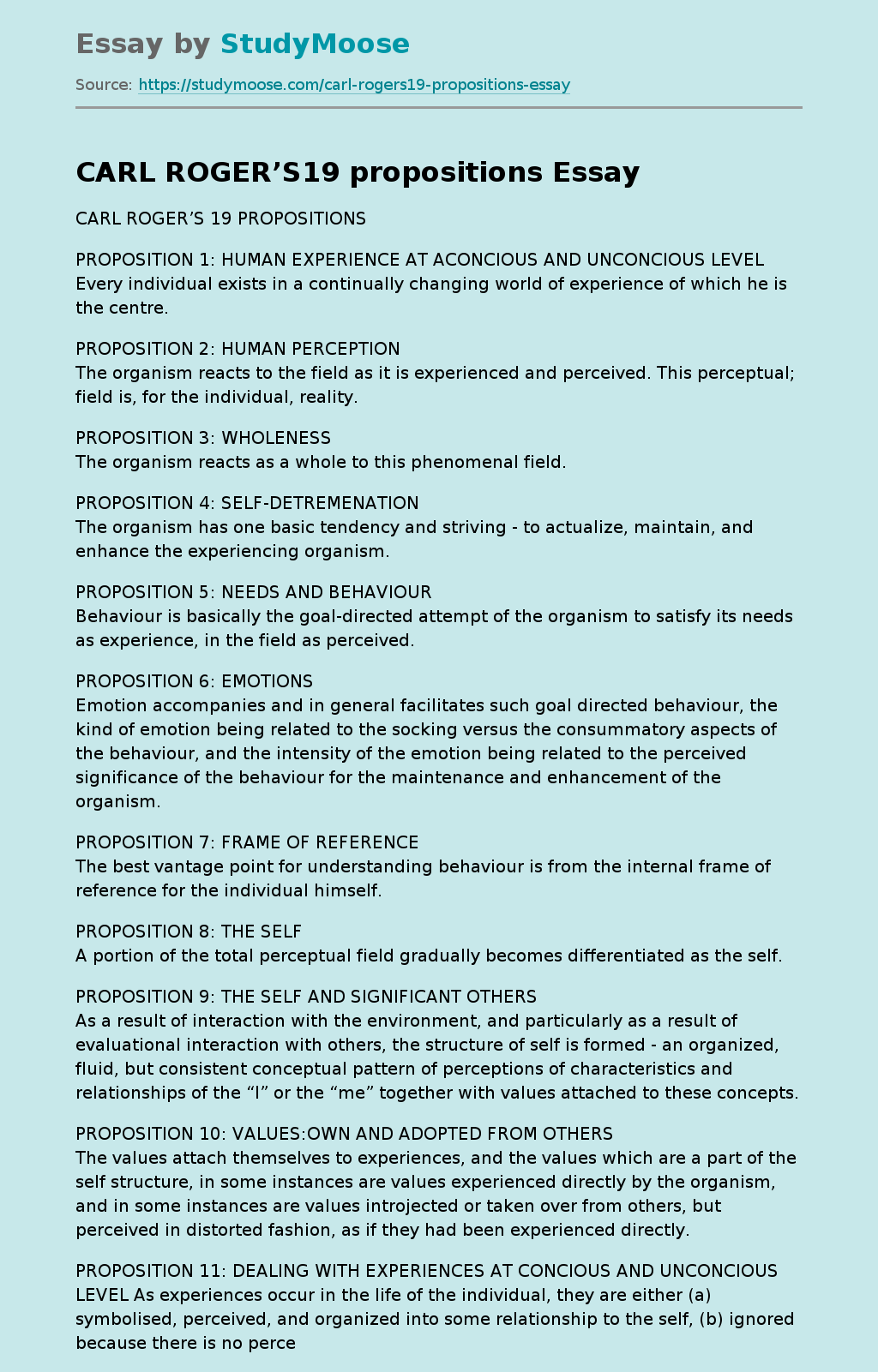