The objective of the CCJ was to provide for the Caribbean community an accessible, fair, efficient, innovative and impartial justice system built on jurisprudence reflective of our history, values and traditions while maintaining an inspirational, independent institution worthy of emulation by the courts of the region and the trust and confidence of its people. However, like any other objective, there are both advantages and disadvantages that accompanies it. After careful analysis on this matter, there are a number of advantages that can be explored.

Don't use plagiarized sources. Get your custom essay on
“ Caribbean’s Final Court of Appeal ”
Get custom paper
NEW! smart matching with writer

It is believed that judges who are present in the final courts that play a role in the decision making of the case, should be knowledgeable of that country’s rules and regulations, and should also be knowledgeable of what is happening in the country and rule with such things in mind. Do you think that the Lords of the Privy Council would actually know the present situation of your country better? No!

They would just base their decisions excluding the constitution precepts of the nation in question.

Lord Griffin was quoted as saying: “The local courts with their knowledge of local conditions are far better equipped to embark on the analysis of the fact and the evaluation of the needs of the parties and are essential to arriving at a fair decision. ” Based on those comments, one can clearly conclude that even the judges of the Privy Council concur because they understand that they are not well quipped to make certain judgments in the manner as the local courts. Additionally, a statement was made by Lord Bingham in which he admitted that the local courts would be better off in dealing with these matters, and he stated: Surratt v A. G of Trinidad and Tobago – “To the extent that the answer to the present problem is doubtful, weight should be given to the judgment of Trinidad and Tobago courts.

A judge sitting in a local constitutional environment, in which he has grown up and with which he is familiar, is likely to have a surer sense of what falls within the purview of the constitution and what falls beyond, than a court sitting many miles away…” Furthermore, Francis Jacobs – Privy Counselor and former Advocate General of the European Court of Justice had this to say: “A supreme court of high calibre has been established in the Caribbean which would be able to…develop a modern Caribbean jurisprudence in an international context…

All possible steps should be taken to encourage the Caribbean to accept the jurisdiction of their own supreme court…” Independence as quoted from the Webster’s Encyclopedia English Dictionary, is defined as: “the state or quality of being free from influence, control, or determination of another or others. The main purpose of the CCJ in the Caribbean is for us, as Caribbean people, to have our own court so we cannot be dependant on others. Many Caribbean islands are no longer British colonies, but it is strange that they still feel comfortable being dependant on an institution of the same colony from which they became independent, to administer final steps of justice.

That is a slap in the face to our ‘independence’! According to Douglas Mendes: “You cannot…call yourselves independent if you go to a foreign court as your final court of appeal. ” Similarly, Dr. Francis Alexis, Attorney General Of Grenada, stated that the CCJ: “…would promote our sense of self confidence and would be a complement to the political independence for which we have fought. The whole aspect of the CCJ was to give Caribbean people a voice and a chance to embrace their independence, but how can this be accomplished if we keep giving it to the Privy Council?

Let us draw our attention to the financial aspect of this matter. If the CCJ is to be put to use, it would be funded by its own Caribbean people. We would not have to depend on the funds of other nations that may later withdraw and enforce bias decision making in our court. Furthermore, just imagine having to pay an enormous amount of money just to travel to the UK for settlement to a case. What is the sense when the case could have been settled in the CCJ? The whole point of the matter is that trying a case in the CCJ would never amount to the price of the Privy Council. Moreover, the CCJ will give us a sense of well being.

It is seen as a pathway for our future generation. It would also be a necessary institution for our upcoming potential lawyers because it would provide recognition and success. Additionally, we are living in an era where youths are no longer comfortable swallowing the status quo, and they constantly question the actions of these high positions. Consequently, it is critical that in this juncture of our development as a Caribbean people, we establish practicable institutions that would provide opportunities for the future generation. On the other hand, although there are a number of advantages in making the CCJ a final appellant court for Caribbean nations, there are also equal disadvantages.

The stance on this matter includes: the cost involved in the establishing and operating another bureaucracy, the bias in the CCJ courts, the political interference as well as the unjust rulings. It is postulated that the long term financing of the CCJ may be very problematic. In a region that is still regarded as ‘developing’ and where problems of devaluation, and the everyday struggle of recession, that is presently slapping us in the face, the question of financing a court at this magnitude is not feasible. Furthermore, it is in the minds of people, that with the present political atmosphere in our region, the replacement of the Privy Council by the CCJ is only a recipe for destruction. They fear that if the CCJ stands as the final court of appeal in this region, that there may and will be political interference in our courts.

It is of the belief that it will not be easy for the judges, being as human as they are, to ignore their political stance when reaching the final verdict in a case. This may result not only to a bad or an unjust ruling but chaos may also arise in the region. There is also an atmosphere of bias where the CCJ is concerned. As humans, we are entitled to our own beliefs. Arguments have arose that if the CCJ was to be the Caribbean’s final court of appeal, that it is a must, that not only bias but prejudice may reign in our courts. This may arise from different Caribbean countries feeling that they are better than some or it may arise from the revenge that countries may want to distribute on other neighboring islands for some reason or the other.

Whereas if the Privy Council was the final court of appeal instead of the CCJ, the Lords in the Privy Council will be free from all bias whatsoever, reason being that they only arrive at a verdict with the evidence they were shown. In closing we see the advantages in having the CCJ as a final appellant court as oppose to the Privy Council with reference to the legal and social landscape of the Caribbean, our independence, the comparatively cheaper expense of the CCJ as oppose to the Privy Council and leaving a legacy for our future generation. On the other hand, some may argue that it is seen as a disadvantage because of the cost involved in the establishing and operating another bureaucracy, the bias in the CCJ courts, the political interference as well as the unjust rulings. Shaqueilla Samuel 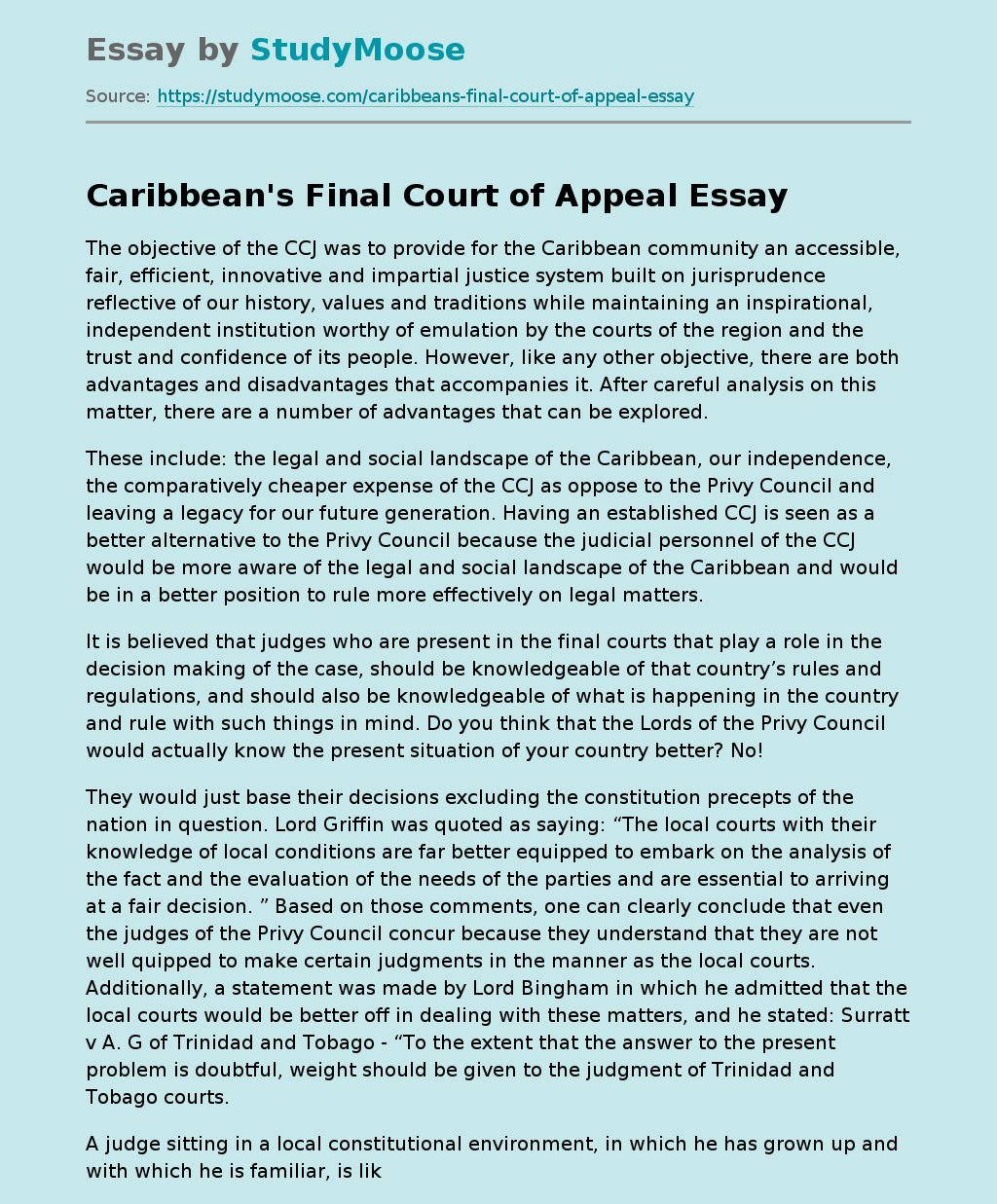