African music and history of African music in the Caribbean; Identify and list some of the common African influences/features found in Caribbean folk and popular music.

African music: music of the music of the Africa diaspora was refined and developed during the period of slavery. Slaves did not have easy access to instruments, so vocal work to on new significance. Through chants and work songs people of African descent preserved elements of their African heritage while inventing new genres of music.

Don't use plagiarized sources. Get your custom essay on
“ Caribbean Music and the Influence It Has on the Caribbean Music ”
Get custom paper
NEW! smart matching with writer

The culmination of this great sublimation of musical energy into vocal work can be seen in genres as disparate as Gospel music and Hip hop. The music of African diaspora makes frequent use of ostinato, a motif or phrase which is persistently repeated at the same pitch. The repeating idea maybe rhythmic pattern, part of the tune, or a complete melody. (wikipedia, 2013)

The History of African music in the Caribbean : without a doubt the influence of black African music has spread worldwide and has a profound effect on music virtually everywhere.

Caribbean music especially started to be influenced by the African heritage when slave trade was originally brought to the Caribbean and the Americas. There are different genres of music but the steel bands, calypso, and reggae. Listening to Caribbean music can definitely have a very positive affect on your mood. It will give you a real “good feeling” and help highlight your day. For the most part the music stemming from the Caribbean is happy, vibrant and “fun like.

” The unique sound of steel drums (or pans) takes your mind straight to the Caribbean. Instantly you think of palm trees, spectacular long sandy beaches, hot sunshine days, long cool drinks and everything at your disposal to make your life easier and more tranquil. Steel pans (drums) have roots in Africa but its home is definitely in Trinidad. Steel pans evolved in the 1930’s replacing the original banned tamboo bamboo. A bamboo was originally cut to various lengths and sizes and was made into the main instruments.

Reggae is one of the best known genres of music, which first came famous in the 1960’s especially in the United States. Reggae’s home is Jamaica and the world capitol has to be Kingston, Jamaica. Reggae’s development is
partially due to African and Caribbean music, Ska, Rocksteady, and American R&B.

Artists such as Desmond Decker, Jimmy Cliff, Prince Buster and the Legendary Bob Marley breathed special life into reggae and it officially came to be prominence around 1967-1968.
Bob Marley was probably the everlasting king and his masterful influence will live on forever.
Think of Calypso, think great rhythms and let the music of the Caribbean take off to a better more beautiful place. It will help inspire you. (Jeszke, 2010)
African –Caribbean music: is a broad term for music styles originated in the Caribbean. These types of music usually has an West African influence because of the presence and history of African people and their descendants living in the Caribbean, as a result of the trans-Atlantic slave trade. (wikipedia, 2013) Most notably: * Music of Cuba

Zouk Music: is a style of music originating in Guadeloupe and Martinique 1uring the 1980’s. The conventional Zouk sound has a slow tempo, and it is sung in Antillean creole, although it also has varieties that have developed on francophone Africa.it is popular throughout the French speaking world, including France and Quebec.

Jamaica: An early form of African-Caribbean music in Jamaica was junkanoo, (type of folk music) and work songs were the primary forms of Jamaican music at the beginning of the 20th century. These were synthesized into mento music, which spread across the Caribbean.

Trinidad and Tobago: Trinidadian folk calypso is found throughout the area, as are African-Caribbean religious music styles like the Shango music of Trinidad. Calypso’s early rise was closely connected with the adoption of carnival by Trinidadian slaves, including camboulay drumming and the music masquerade processions. In the 1970’s, a calypso variant called Soca arose, characterized by a focus on dance and rhythms rather lyricism. Soca has since spread across the Caribbean and abroad. (wikipedia, 2013) 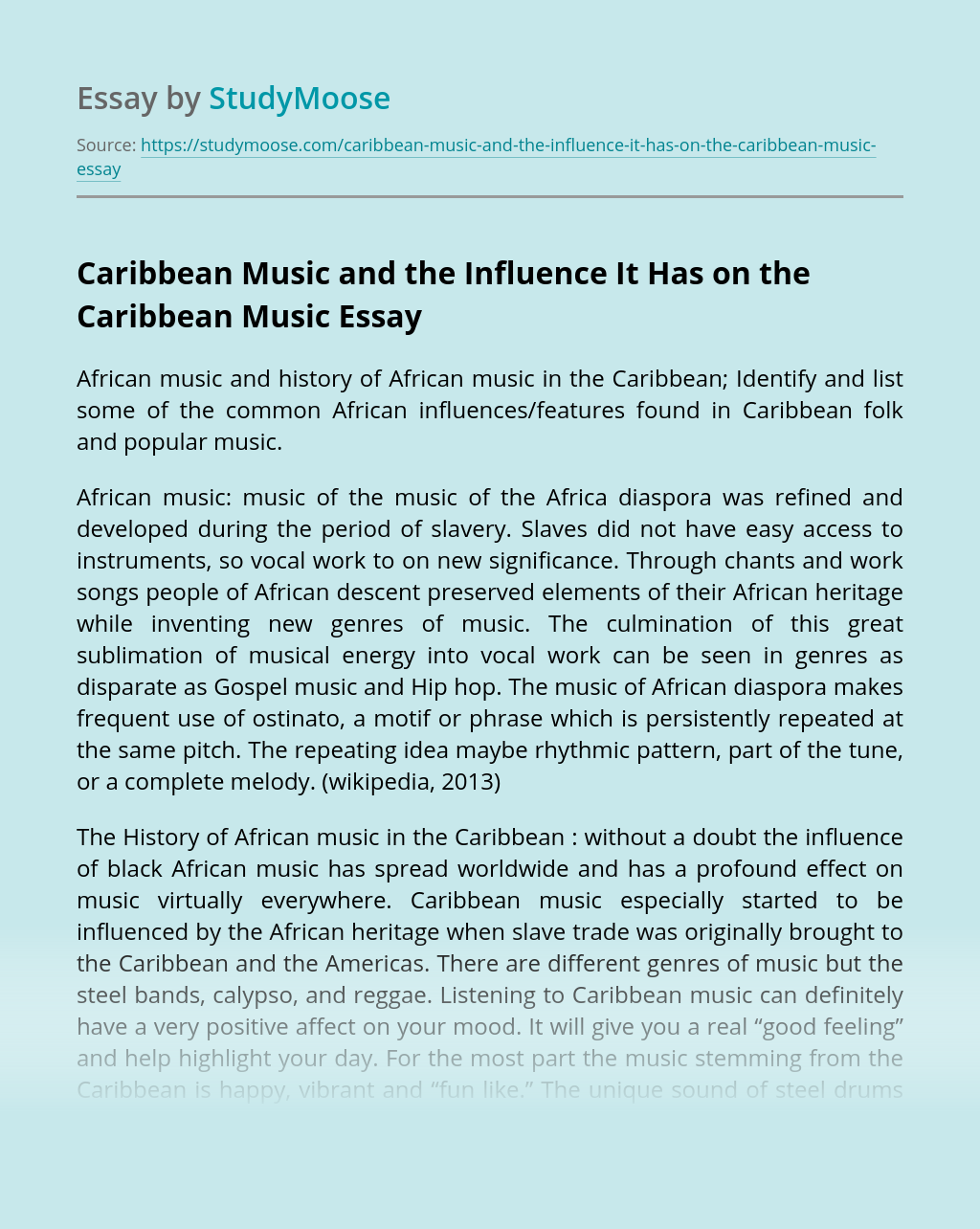