In the case study of Cardillo Travel System, Inc.

I will examine the violations the Securities and Exchange Commission’s has charge Cardillo Travel System. Determine who was in violation of the AICPA’s code of Professional Conduct and analyze the key reasons why they were not in compliance. Analyze the action Cardillo’s outside auditors and evaluate the level of efficiency of the audit risk management, and determine if the components of internal control were being followed correctly. Cardillo Travel System, Inc., the fourth largest company in Travel companies was founded in 1935 and purchased by Rognlien in 1956. Being the fourth largest company, they was experiencing a huge financial problems. With the company’s revenues increasing almost 100 million dollars by 1984; there operating expense was steadily increasing in 1982 and 1984. As a resulted of the problem, Cardillo had recorded a loss of 1.5 million dollars. Cardillo Travel System, Inc. had hired the services of Touché Ross to act on their behalf as an external auditor in the company.

Helen Shepherd who was acting as the audit partner supervising, the audit distinguished a suspicious entry of a transaction involving United Airlines and Cardillo Incorporation. Her intuition clarity on the validity of the entry of the transaction.

Cardillo responded by indicating that it was an adjusting entry Cardillo had recovered in late June. When Lawrence was contacted on the transaction and was asked to contact UAL to confirm the transaction, the information received was that the amount was refundable if certain stipulations were not met. When Shepherd called Rognlien to determine the difference in opinion, Rognlien lied to Shepherd of a secret agreement with the chairman of UAL regarding that the payment will never be made to UAL.

However, Shepherd required permission to contact the Chairman of UAL, but Rognlien refused. Shepherd therefore asked William Kaye not to recognize the 203,210 transaction as revenue until the stipulations were met. Nevertheless, Kaye refused to make the adjusting entry insisting Lawrence had ordered the crediting of the same in a revenue account. Rognlien decided to call Shepherd in December 1985 to terminating Cardillo’s relationship with Touché. In January 21, 1986 Cardillo hired KMG Man Hurdman to replace Touché Ross as its independent audit firm.

While doing the audit, KMG detected the problem the company was having and forwarded the suspicious transaction. The same old story of the secret business arrangement was given to Roger Shlonsky who was the audit partner responsible for Cardillo. Roger Shlonsky refused to accept the explanation and ordered the revenue be recorded on pro rata basis over a five year period of the written contractual agreement. Securities and Exchange Commission’s rationale to charge Cardillo executives (1) In two occasions we find that Cardillo Travel System was making false representations to outside auditors. (2) Financial recording are governed by financial reporting standards. It is evident that Cardillo was not following the accrual concept which state that revenue should be recorded when earned and not necessarily when received. (3) The receipt of payment from United Airlines should have been recorded on a pro rata basis spread over the five year contractual period with a footnote explaining the nature of the revenue.

Cardillo’s decision to record it as an income on one period is a sign that accurate financial records were not being maintained. During the period of 1986, Cardillo Travel System, Inc. was continuously facing liquidity problems. The problem was magnified by a judgment ruling which imposed Cardillo to pay a sum of 685,000 dollars to resolve a civil suit filed against the company. Raymond Riley alerted Rognlien and Lawrence that the adverse judgment had amounted to a ‘material event’ and thus had to be reported to the SEC immediately according to rule 10b-5, as this information was material to a potential investor.

Because this was not the case, Rognlien would move a step further and sell 100,000 shares in the stock market without the release of this material information. Insider trading is a business terminology which explains the trading of a company’s securities done by individuals who have access to information which is not in the public domain. This act has been practiced by Rognlien who sold 100,000 stock of the company’s stake when he realized that the company was not doing well. This information was not shared with the public and thus volatile investors could have fell victim to this unscrupulous act.

In the above case those who were in compliance with the AICPA’s professional conduct included the following individual: Russell Smith, refused to sign the affidavit that Rognlien was pressuring him to sign since it was against the financial reporting provisions of recognizing revenue. Helen Shepherd, upon realizing that the transaction was dubious she asked Kaye not to recognize the transaction and stood by her stand despite losing the client. Roger Shlonsky, did not change her stand and upon the difference in opinion she resigned. William Kaye, refused to make the adjusting entry even when he knew that the transaction was not valid. The actions taken by Cardillo’s outside auditors involved; vouching of the transactions in the company and analyzing the financial statements. This can be seen by the seeking of clarity from the transaction that raised the eyebrow. As we can see the audit risk in this case study can be seen to be very high.

The five components of internal control were not being followed by Cardillo Travel System. This can be determine by the lack of proper communication structure as notice by Rognlien constantly interfering with the accounts. Monitoring is not adequate as Kaye is not following provisions laid down.

The auditors have a key responsibility in assessing the judgment made by the management as this may materially affect the performance of the company. Managerial decisions constantly affect the third parties who are the creditors and investor and hence the auditors have a duty to safeguard and protect them from misleading statements by the management. A lot of value is placed by the public on the independent financial statements since it enhances the degree of confidence to the third parties. Currently the financial reporting seeks to address more relevant information to the end user. Therefore there is more judgment that is put on them and increased subjectivity involved in management’s accounting. It is evident the end users of the financial statements need to be protected from deceit and extortion that may be as a result of management decisions which may be scrupulous and dubious. 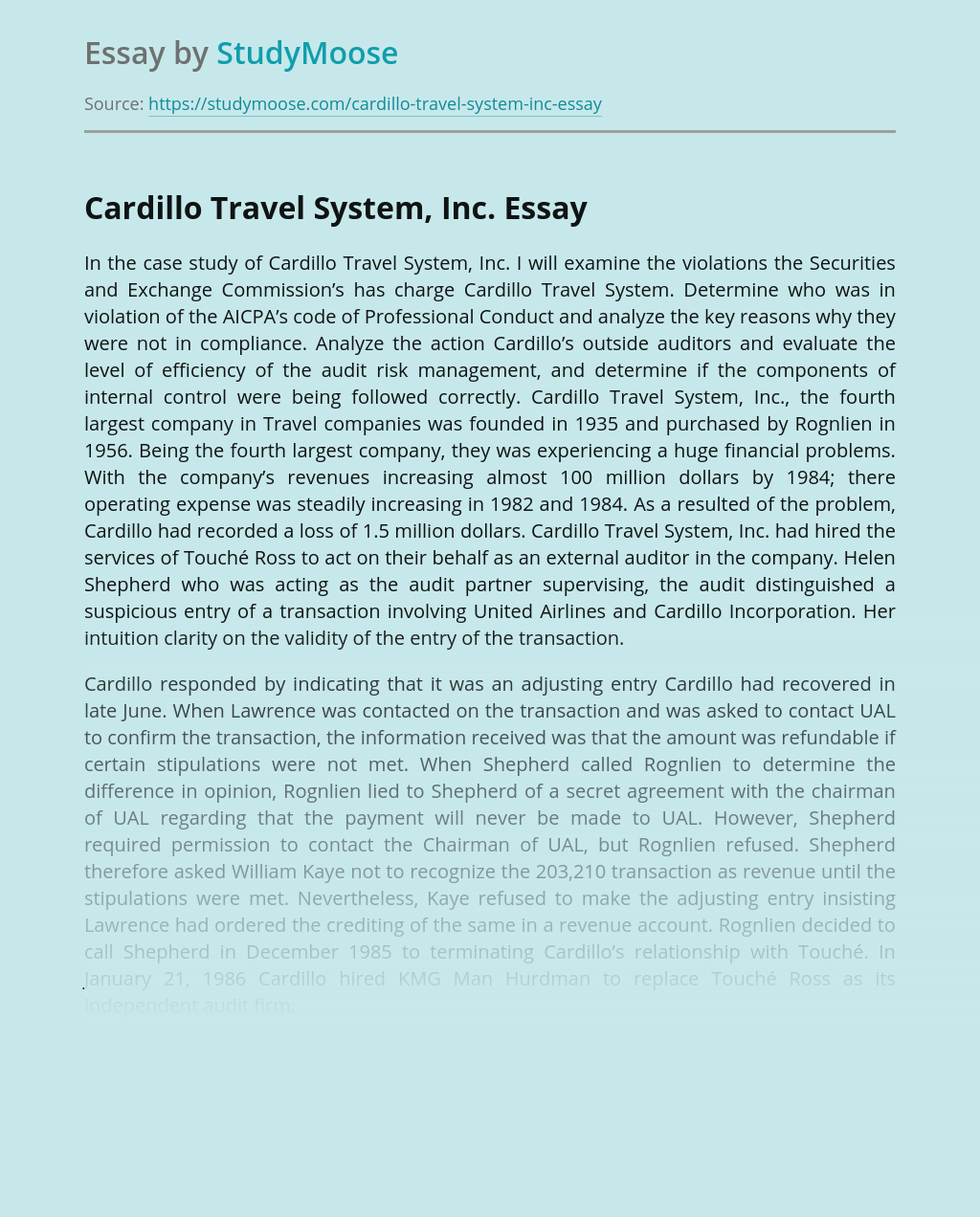