Capital punishment is a difficult issue to address and has been the subject of highly controversial debates over the decades. The United States Supreme Court decided in Furman v. Georgia that the death penalty was a form of cruel and unusual punishment. However, just three years later in 1975, the Supreme Court reversed their decision, and executions resumed under state regulation. The death penalty is considered the harshest from of punishment enforced today. The most common method used to implement this task is lethal injection; although, the electric chair is still used in some states.

Don't use plagiarized sources. Get your custom essay on
“ Capital Punishment – Fair and Balanced ”
Get custom paper
NEW! smart matching with writer

The large debate over the death penalty comes from liberal fanatics who use deception and falsehoods to further their cause.

Supporters of the death penalty consider capital punishment the only way for true justice to be executed for the severest of crimes. Supporters also claim criminals that commit such harsh crimes, including murder and rape, deserve to be punished to the fullest extent of the law. Preventing future crimes and deterring criminals from committing such harsh acts also play key roles in support of the death penalty.

Concrete proof of deterrence alone is not a valid reason for capital punishment, nor is it the underlying principle in use by astute death penalty advocates. Criminals ought to be punished for their crimes committed and not merely to deter others.

That said however, the death penalty unquestionably “deters” the murderer who is executed. Strictly speaking, this is a form of incapacitation; similar to the way a robber put in prison is prevented from robbing on the streets.

Vicious murderers must be eliminated to prevent them from murdering again, either in prison, or in society if they should get out. Both as a deterrent and as a form of permanent incapacitation, the death penalty helps to prevent future crime.

The argument against capital punishment relies on myth, propaganda, and misplaced emotion. Many people against the death sentence claim that the justice system is discriminatory. This statement is blatantly false. African-Americans and other minorities are not impacted unfairly by the justice system. The fact of the matter is the majority of those executed since 1976 have been Caucasian males. If the death penalty is truly discriminatory, then it is biased against white murderers and not blacks, because figures show that African-Americans make up a majority of those convicted of murder. According to the U.S. Bureau of Justice Statistics, blacks committed 51.5% of murders between 1976 and 1999, while whites committed 46.5%. The latest of hate crime laws are likely to only exacerbate the hypocrisy. A “hate crimes” frame of mind translates into tougher sentences for interracial crimes. Since Caucasians are killed by African-Americans 2.6 times more often then the other way around, more killers of Caucasians will be predisposed to receiving the death penalty.Finances are also argued frequently on the topic of capital punishment.

“It costs more to execute a person than to keep him or her in prison for life. A 1993 California study argues that each death penalty case costs at least $1.25 million more than a regular murder case and a sentence of life without the possibility of parole” (Deathpenalty.org). This statement deserves no response, because the figures are not perfect, and are dubious at best. Nevermind the fact that justice should not be up for sale. Serving justice is not about saving money, and should not be treated as if it were an item being contracted, trying to get the “lowest bid.”Retribution is an additional reason for capital punishment, which some opponents of capital punishment confuse with vengeance. As a sound principle of natural law and common sense, the punishment should fit the crime. For example, if someone had been convicted of the assassination of the president, and the judge had sentenced him or her to only five years in prison, the nation would have been properly outraged. Having a fit punishment for the crime committed has been around since the beginning of civilization.

Hammurabi’s Code of Law, developed long before the birth of Christ, claims retribution as, “an eye for an eye, life for a life”. Retribution makes capital punishment justifiable because it is an injustice to tolerate such unimaginable horror.If one commits a crime, he or she should be ready to accept the consequences. Murder is a crime that involves the loss of innocent life, and that act needs to be rightly punished. Murderers should not receive an overextended welcome in a prison. Those who commit these serious offenses do not belong in society. Realistically there is no solid argument against the death penalty. If society were to take capital punishment away, the public would not have an effective justice system and crimes against innocent people would continue. Opponents of the death sentence need to accept the fact that capital punishment is fair and just. Using lies and deceit will only go so far. The people of this country are smart enough to realize the difference between fact and fiction, and the truth is capital punishment works. 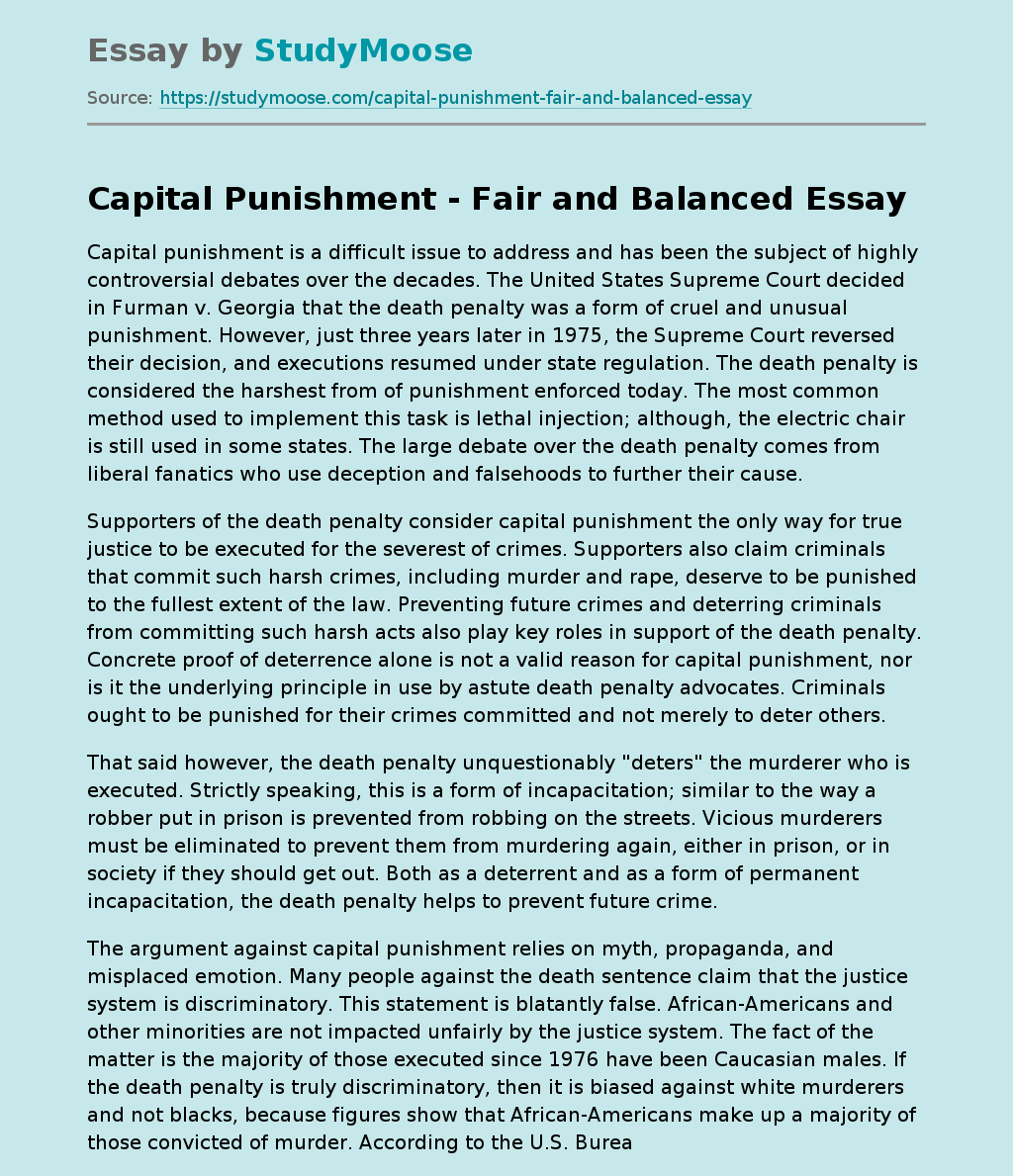