The premise of the poem, Canterbury Tales, written in iambic pentameter, allows Geoffrey Chaucer not only the chance to tell a number of very entertaining stories, but, more importantly, an opportunity to create a cast of enduring characters, still recognisable after six centuries. One of these is the ‘Pardoner’ who proves to be an intriguing character. The passage begins with the words, ‘But let me make my purpose plain; I preach for nothing but greed of gain’. (p. 243) These lines, in effect, sum up the Pardoner’s character.

The main literary device Chaucer uses in his characterisation of the Pardoner is irony.

The topic of the Pardoner’s sermons is ‘radix malorum est cupiditas ’(p) love of money is the root of all evil. The irony lies in the fact that his entire way of life is centred around his love of money. He openly admits this irony, ‘And thus I preach against the very vice, I make my living out of – avarice.

’ In addition, his lack of empathy with his fellow man verges on the sociopathic. He has no conscience when it comes to taking money from the ‘poorest lad’ or the ‘poorest village widow’ with her ‘string of starving children. Chaucer also shows the Pardoner’s complete lack of respect for these people. When delivering his sermons he uses stories from the past because ‘a yokel mind loves stories from of old, Being the kind it can repeat and hold. ’ 244. Chaucer begins his description of the Pardoner in the General Prologue, where he uses the physical characteristics of the travellers to set them in the reader’s mind before he has them tell their tales.

These descriptions give an insight into Chaucer’s attitude towards the Pardoner, and we find it unsympathetic to say the least.

He uses similes to describe the ‘driblets’ of his flaxen hair as ‘like rat-tails’ and his ‘bulging eye-balls, like a hare’, and a metaphor to imply his characteristic sexual connotation, ‘I judge he was a gelding, or a mare. ’ This assessment is contradicted in the Pardoner’s Prologue when he states that he has a ‘jolly wench in every town’. ? Chaucer’s irony is developed even further with the topic of the Pardoner’s Tale. In this case it is an exemplum or parable about three unidentified Flemish youths who go to find Death after it has taken one of their friends.

The Pardoner describes their evil ways in lurid detail, ‘With oaths so damnable in blasphemy, That it’s a grisly thing to hear them swear. Our dear Lord’s body they will rend and tear’ 245 and further with their aberrations ‘And girls with cakes and music, devil’s gauds To kindle and blow the fires of lechery That are so close annexed to gluttony. ’ 245 He pursues Biblical allusions to Lot and Herod, Adam and Eve, villains of the Bible, as well as various historical figures, showing how they, too, sinned against the Lord and Nature, condemning these youths by the comparison.

Of course, the irony lies in the fact that this litany of evil habits describes the Pardoner’s lifestyle in lurid detail as well. At the end of this (morality) tale, the Pardoner goes directly into his spiel to sell his ‘relics’, proving that this is one of his stock standard sermons designed to fleece his congregations. This is an allegorical tale where the three youths ‘ represent sin and are in pursuit of death, represented by the gold coins, by a crooked way both serpentine and dishonest’.

Chaucer uses the Pardoner to subtly make known his feelings about the Medieval Church as an institution. This was a bold move as this era was marked by blind obedience to the Catholic Church but some parts of the Church were corrupt particularly in the sale of indulgences by Pardoners. Religion is still marred by corruption throughout the world and will continue due to the exploitation of the most vulnerable in society. In effect, little has changed since Chaucer’s time, and his works prove him to be a forward thinker. 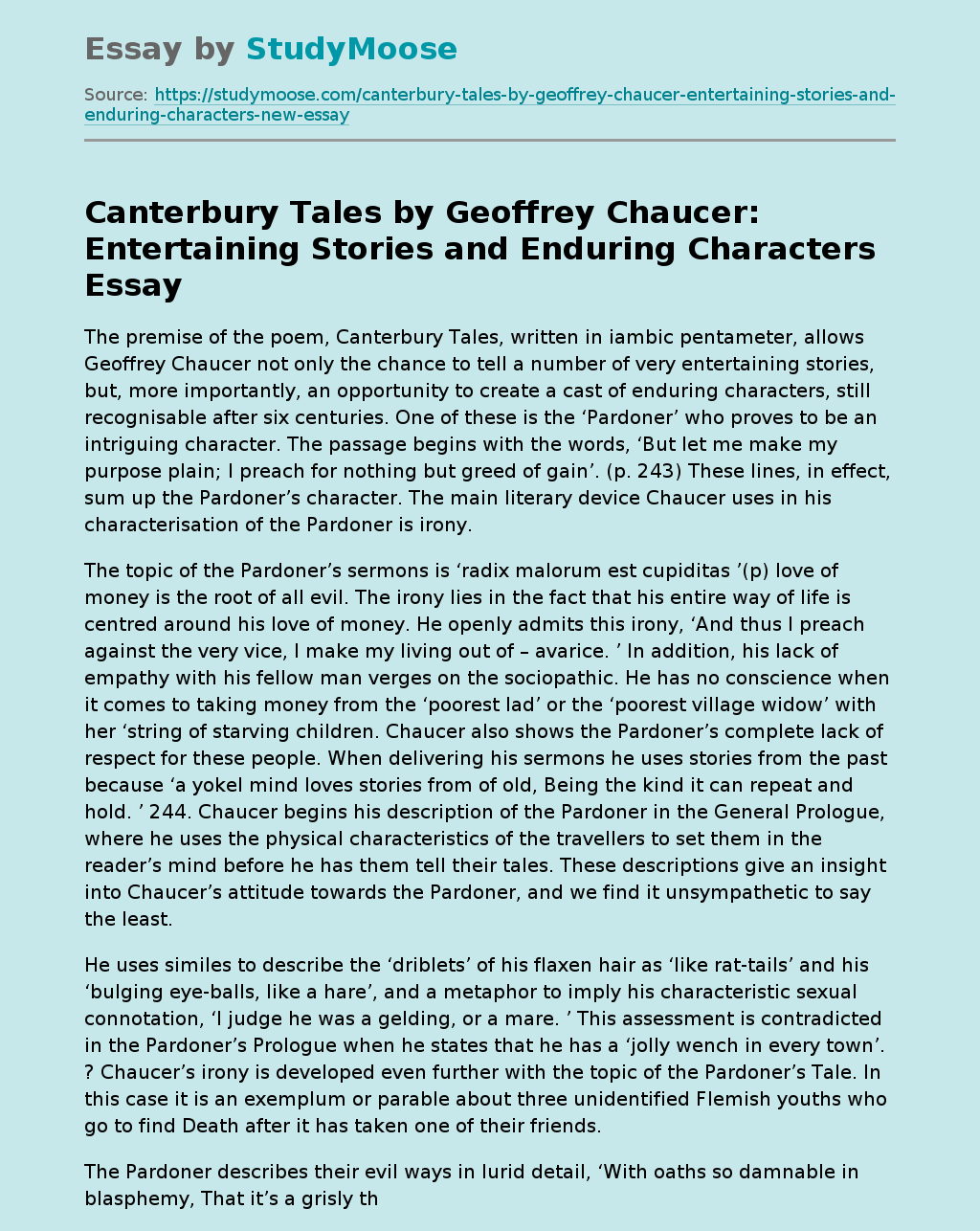