Using the Accenture document on governance presented with the Alcan case, place Canadian Shield in the appropriate quadrant. According to the Accenture document, I would place Canadian Shield within the efficient, predictable operator category. The slow rate of change and need to compete on operational efficiencies characterized by most companies in this quadrant is detailed by the following quote from the case authors. “Sustainability for Canadian insurance companies greatly depended on investments in projects that increased customer service and improved operational efficiency.

Don't use plagiarized sources.
Get Your Custom Essay on Canadian Shield Case Just from $13,9/Page

” This comment is aligned with the predictable operator company practices and is evidence that in order to gain a competitive advantage in the Canadian insurance industry it is vital that operational efficiencies are realized through better IT solutions at Canadian Shield and its parent company, Assurance Centrale Inc. (AC).

In the key decision going forward, is this Seamus’ call? If not, whose decision is it? Who should make the decision? Under what decision area(s) in the Weill & Ross governance model does this decision fall? As the leader of Information Systems at Canadian Shield, one of many subsidiaries of Assurance Centrale, Seamus Reynolds was tasked with piloting a new information system that could potentially replace the IS’s at all of Assurance Centrale’s regional offices.

Five years after starting this project he was feeling the weight of the responsibility for a project that could eventually transform the entire enterprise. The executives at Canadian Shield and AC should have put together a team of knowledgeable IT professionals, business unit heads, and executives to make sure that the new IS would be selected, budgeted, and implemented properly. Instead they allowed one IT leader in a Calgary-based subsidiary to essentially determine the course of the entire enterprise’s information systems. This type of decision making identifies with the IT Monarchy type of governance styles displayed in the Weill & Ross governance model.

According to the model the IT Monarchy style allows IT executives to hold the right to make important IT decisions. A more affective mechanism could be put in place by AC in the form of an IT leadership council that includes corporate and business unit CIOs. What do questions 1 & 2 tell us about IT governance at CS? Is it appropriately structured for this kind of decision? As mentioned above, AC and Canadian Shield both reflect signs of the IT Monarchy style of IT governance. It appears that by letting the same IT manager that helped create the existing problematic information system called ALPHA spearhead the project of finding its replacement was a conflict of interest. In an industry that is heavily dependent on gaining a competitive advantage through operational efficiencies and consistently delivering value added projects to the customer, it is essential for AC and CS to rethink the current corporate governance model.

Across almost all of the major IT governance categories, it seems that CS and AC are either lacking elements completely or lagging behind current IT standards significantly. IT principles or high-level statements about how to use technology to create business value is non-existent in the Canadian Shield philosophy statement and hard to identify within the case write-up by the authors. Furthermore, the corporate IT infrastructure and architecture has become so archaic that the functionality of basic business applications is troublesome for end users such as insurance underwriters. Based on the previous analysis I would say that the IT governance in place at both AC and CS are not structured properly to make a potentially enterprise-wide solution decision.

Both economic and gaming theories tell us how CS should approach the issue of sunk costs with respect to the “current” situation with ISS. Does the traditional view of sunk costs apply here? Sunk costs are costs that a company cannot recover no matter what happens financially in the future. In this case it is hard to the think of the million dollars and five years of time and resources as a sunk cost. However, to AC and Seamus that unfortunately is the truth.

Since the proximity of the new ISS system being implemented is close and it has taken so long to arrive at this point, taking a traditional view of sunk costs will not be easy for the employees at CS. Despite this sentiment, it is important that executives remain objective when determining the future direction of the company. This project should be treated the same as if were any other business project such as a building and if it no longer viable it should be seen as a sunk cost and a new project should be selected for implantation. A sunk cost is not necessarily considered a loss however, if CS decides to abandon the ISS project that is exactly what it could and in my opinion should be.

Here’s your obvious final question- what would you recommend and why… As tough as it will be for Seamus, I believe that he should consider his IS project a failure and consult with the executive council in order to prepare the company for Request for Proposals (RFPs) from outside software vendors like AIS. The current ISS project is now five years old and almost 5 times over budget and from initial testing end users find it complicated and not user friendly. This could lead to extensive training, ineffective and inefficient workflows, and further extensive development projects.

Despite the previously mentioned hurdles to get the ISS off the ground, it is only given a 50 to 70 percent long-term success rate while the AIS was given better odds. In addition, the AIS solution is already proven to be a sustainable IS platform for insurance companies with the promise of successful Canadian market capabilities. It is unfortunate that Seamus will inevitably develop dissention between the IS professionals he works with as well as the potential lay off of many of his team members. However, business is business and if Canadian Shield and the rest of Assurance Centrale’s subsidiaries wish to capture a competitive advantage in the 21st century, an off-the-shelf solution such as AIS should be considered immediately. 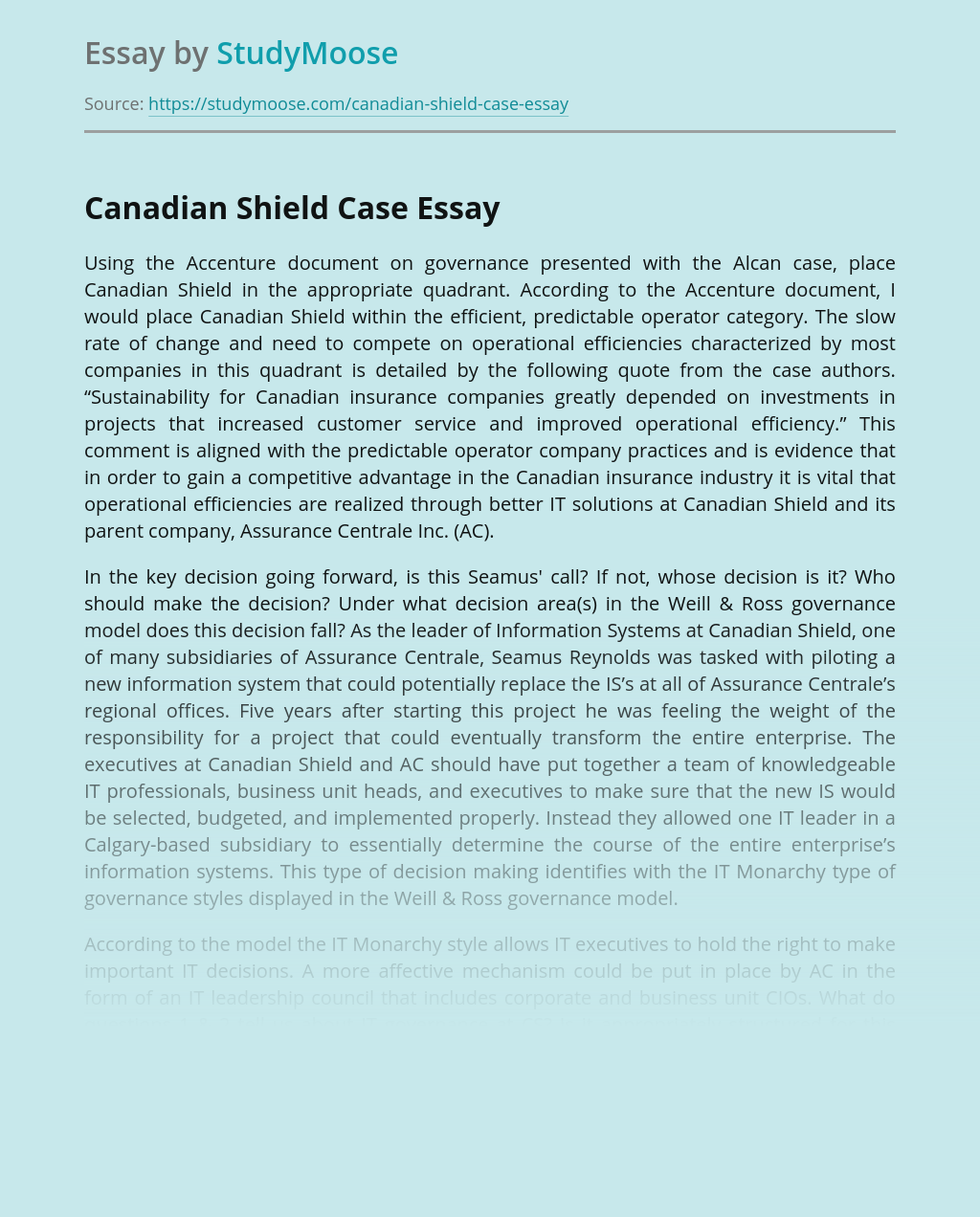