Canada's Involvement in the Vietnam War

The bloody Vietnam War of the 1950’s was fought by the brave American troops with the help of the Canadian citizens. Though, sources claim that Canada had a limited amount of contribution in the war, facts state otherwise. The Vietnam War took place during the Cold War era where a military conflict had occurred in Vietnam, Laos, and Cambodia from November 1 1955 to April 30 1975.

Canada became officially involved in the Vietnam conflict in 1954, as part of the International Commission for Supervision and Control in Vietnam.

Don't use plagiarized sources. Get your custom essay on
“ Canada’s Involvement in the Vietnam War ”
Get custom paper
NEW! smart matching with writer

However, Canada did not post troops to Vietnam until 1973, in which Canadian troops remained under the United Nations banner to enforce the Paris Peace Accords. The War had persisted for more than nineteen years, five months, four weeks and one day.

During the Cold War era, Canada remained associated with the main stream western powers. Many Canadians who truly wanted to fight in the War had served along the U. S Military. Canadians serving with the United States had occurred as far back as the Civil War.

In addition, Canada was part of many organizations such as “N. A. T. O” (North Atlantic Treaty Organization) which guaranteed Canada would not partake in the Vietnam War.

Even though people around the world contemplate that Canada had no contribution in the Vietnam War, various facts state that Canadians did have excessive amount of involvement towards the Vietnam War that was never taken into consideration. Throughout this essay, the reader will be able to grasp a general understanding of the ways in which the Canadians had part in The Vietnam War, regardless of what bias sources claim.

To start with, Canada sent more than thirty thousand troops into the Vietnam War with the Americans – these troops volunteered and died there.

Canada's Involvement in the Vietnam War. (2016, Oct 03). Retrieved from https://studymoose.com/canadas-involvement-in-the-vietnam-war-essay 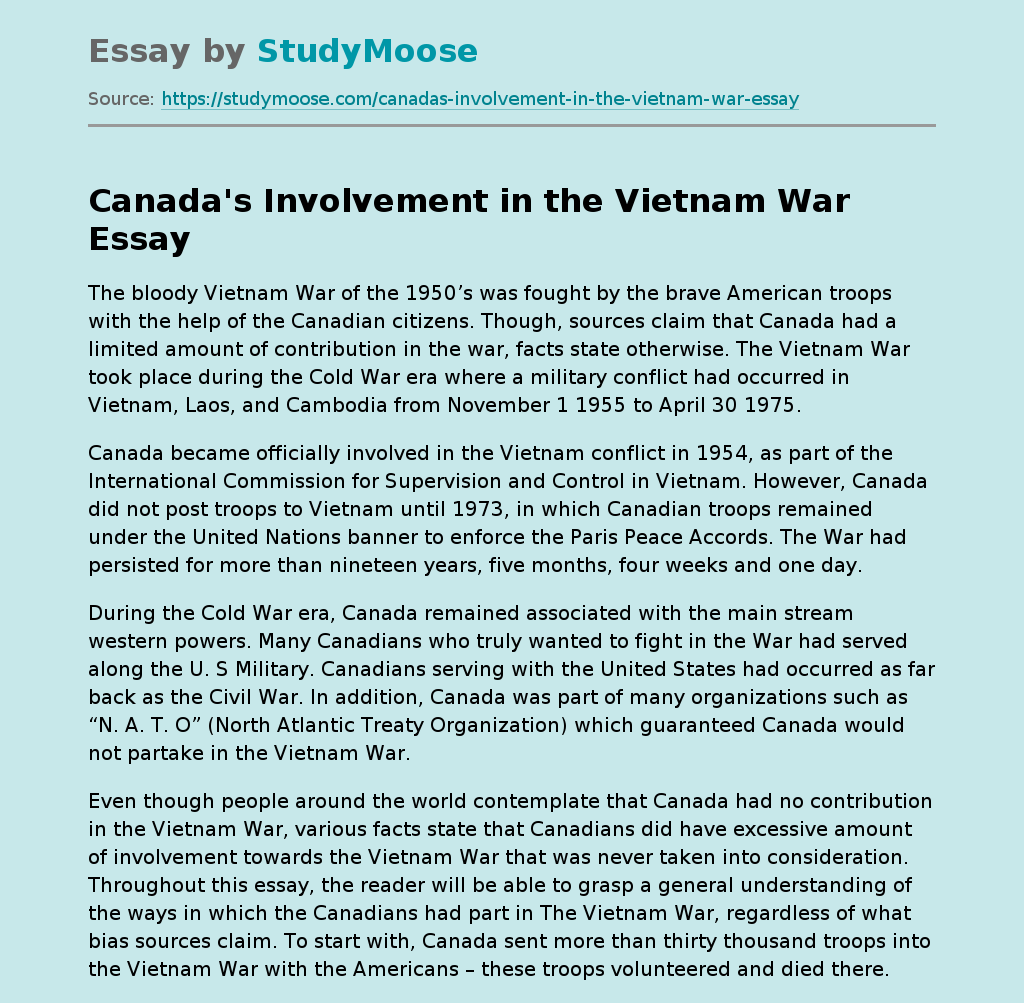