Mass graves overflowing with bodies. Bodies which have been mutilated and burned lay on the ground. Carelessly thrown everywhere as if they are not even human. This was the sight in war torn Cambodia. The Khmer Rouge controlled Cambodia and terrorized the people. They killed people who were educated, from a certain ethnic group, from a certain region, opposed the Khmer Rouge or just wore glasses. People were taken to facilities used for killing and torture and were never seen again.

Don't use plagiarized sources. Get your custom essay on
“ Cambodian Genocide ”
Get custom paper
NEW! smart matching with writer

People were forced out of the cities and put in work camps.

The people from the cities were called the New People while the existing farmers and rural peasants were called Old People. The New People were despised by the Khmer Rouge for their Western ideas. The leader of the KR, Pol Pot set up the communist government in Cambodia after the U. S. A carpet bombed Cambodia and made it politically unstable. The genocide that followed this was horrendous.

The effects of it still remain. The Cambodian Genocide followed the eight steps of genocide and negatively impacted Cambodia for years to come.

Classification categorizes people based on their ethnicity, race, religion or nationality. A classification in this genocide was the Old People and the New People system. The people that were kicked out of the urban cities were called the New People because of their Western ideas. The people that were farmers before the Khmer Rouge takeover were called the Old People. The Khmer Rouge got most of their support from the rural people unlike the Soviets who gleaned their support from the urban elements.

The New People were more abused than the Old People.

They were considered the lowest in the village and had no freedom of speech. They had to listen to the other classes. They were also not allowed to farm because they had led “corrupt” lives and had to be trained to be “productive” workers. In order to break their spirits and instill a sense of loyalty, the New People were given the longest and hardest work. The New People were not the only people that were abused and killed by the Khmer Rouge. Muslim Chams were heavily killed and oppressed. They were forced to eat pork (which is highly discouraged in Islam).

If they refused to eat it then they were killed with a blow to the back of the neck with a hoe. About 400,000 Muslims were killed through this extermination process. The classification stage was heavily used in the Cambodian genocide. Symbolization refers to how people apply symbols to these different categories. The Khmer Rouge assigned a blue scarf to the people who were from the Eastern Zones of Cambodia. This blue scarf was a basically a sign that told the Khmer Rouge who was marked for extermination.. They also killed people who wore glasses.

They said that the glasses symbolized that the wearer could read and was therefore literate. They also targeted cities. They destroyed some and others were re purposed to fit their needs. They believed that the cities depicted a westernized ideology and that they could not fit into their peasantism ideology. Dehumanization is the third stage in genocide. It is the denial of the other group’s humanity. It depicts the other group as being less human and helps the extremists get over their squeamishness to kill. This tactic was used to demonize higher ranking people of the opposition.

This means that they painted their enemies as demons who threatened the well being of the revolution. All genocides are organized. No matter how little. The Khmer Rouge evacuated Phnom Penh which led to the desolation of cities. They also classified people as Old or New People which led to the division of the people. They separated families and children and sent them to work camps where they were forced to do hard labor. They also processed city dwellers and asked them to provide autobiographies in order to document their class background.

This widened the gap between the people and made them easy to manipulate. They also painted the U. S. A and Vietnam as their enemies. Basically anyone who was tied to the West was considered an enemy. Dehumanization made it easier for the to kill the “enemy”. Identification is identifying the victims and classifying them. The Khmer Rouge was secretive from the beginning. They had an agenda that included the eradication of the Vietnamese in Cambodia, yet they relied on them as allies. In preparation, the Khmer Rouge in Cambodia secretly killed Cambodians that had been trained by the North Vietnamese.

They were also forced to remain hidden because they were violently attacked by Prince Sihanouk’s government. Ironically after his exile, he joined forces with the Khmer Rouge. But all their alliances were temporary even though the Vietnamese and Prince Sihanouk thought of them as permanent. The Khmer Rouge had their own agenda. The forced evacuation of Phnom Penh was a preparation step for the genocide. Extermination is basically a fancy term for genocide but the frankness of it shows the effects of dehumanization. Extermination is a term that describes the killings of pests.

The victims are not considered humans. They are considered vermin or pests. This prompted the makings of mass graves and the brutal killings that took place. People were killed by harsh forced labor, mass executions and internal killings. The KR imposed harsh labor. They forced the people to work from dawn till dusk. They barely had any food and they were not allowed to grow their own. The KR also conducted mass executions in which hundreds of thousands of people were executed. After sometime the KR became paranoid and started killing their own members who they suspected of treason.

They also killed members who were not behaving in a way that the KR wanted them to. Denial is when the country in which the genocide took place tries to cover up the evidence and divert attention away from the atrocities that were committed there. They basically burned all the records and then don’t allow historians to view the very little records that have survived the burnings. They hide the evidence. They cover up the mass graves. They burn then or try to dig them up some more. This is done to make sure that they cant be tried by a court for their actions.

Denial is a big problem because the destruction of the evidence makes it harder to try the people behind the genocide. The cruelty that the Cambodian people under went is unimaginable. But the worst part is that we could have stopped this atrocity during the first six stages of the genocide. Our reluctance caused suffering for people who unfortunately lived in Cambodia. The people who were behind it may have been brought to justice but their actions are still affecting Cambodia today. The Cambodian Genocide followed the eight steps of genocide and negatively impacted Cambodia for years to come. 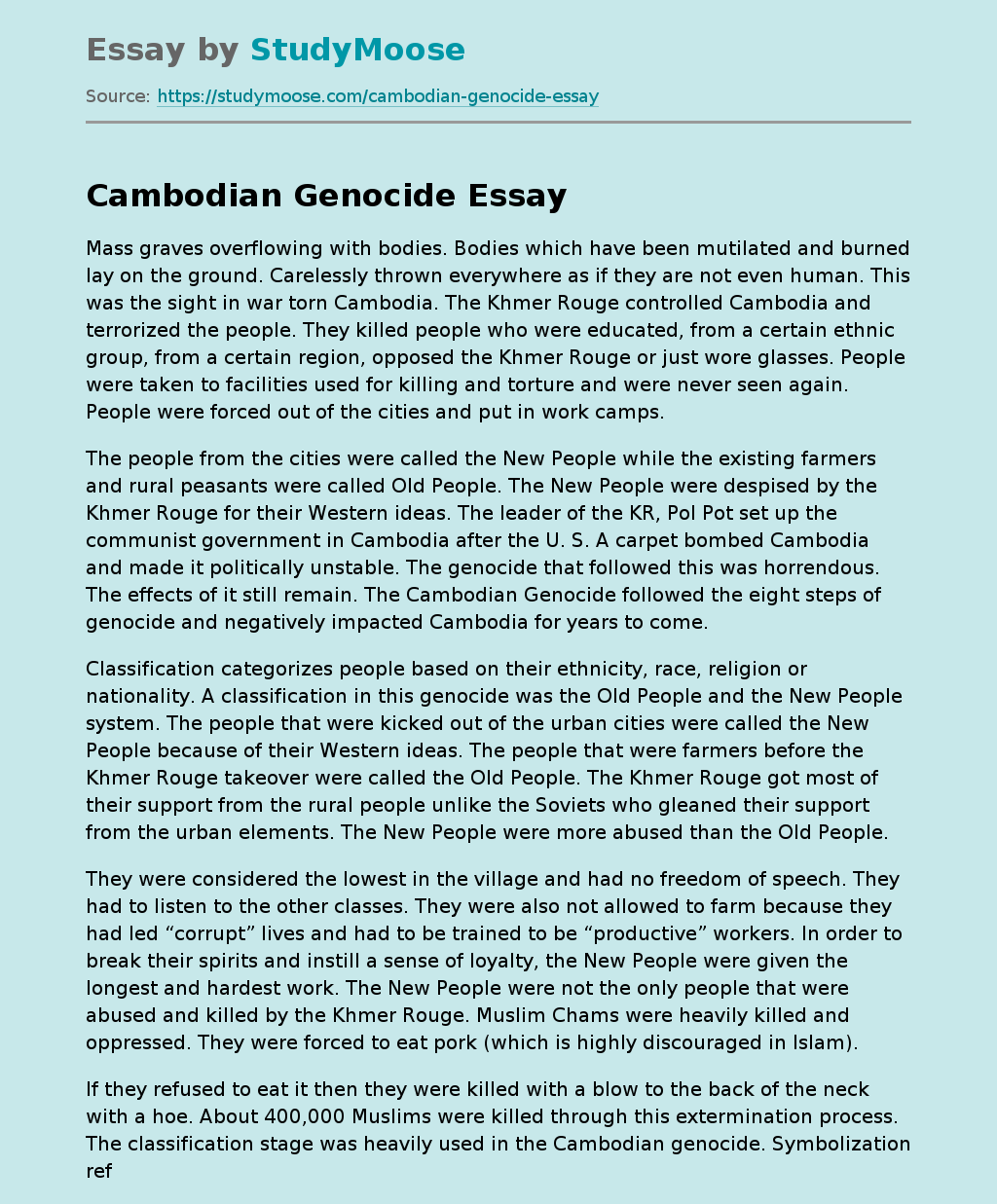