A discussion of how nakedness and dress in William Shakespeare’s “King Lear” represents the status of a character.

Nakedness and dress in Shakespeare’s King Lear, represented the status of a character. Many scenes use clothing to show one characters dominance over another. The more opulent the clothing, the higher the status, or the lack of clothing, the lower the status. A few characters go through many wardrobes. Lear and Edgar, both start the beginning of the play wearing expensive, luxurious clothing, but each at different times wear less glorious clothing or even no clothing at all.

Don't use plagiarized sources. Get your custom essay on
“ Calvin Klein and Shakespeare ”
Get custom paper
NEW! smart matching with writer

Lear who is the most powerful and authoritive character in the beginning of the play, is also the best outfitted. Lear during the play, soils his clothing in storms, heaths, battles, and other harsh elements. At the same time that his garments are lessening in value, so is his level of power and status. Lear finds the bottom of the abyss he enters when he, a fool, a beggar, and a madman have taken shelter in a hut from a storm.

For Lear to be in the company such as this, his status is near nothing. In order to show this degeneration from high to low, Lear strips off all his clothing, showing he is now at the very bottom of the social order. To have some clothes is to be someone, to have none is to be nobody. Edgar, legitimate son to the Earl of Gloucester, is well dressed, not as much as Lear, but still above commoners.

Edgar is believed to be plotting to annihilate his own father. So every one is after someone named “Edgar”, who is a well dressed noble. In order to protect himself, Edgar becomes no one. He becomes nobody by shedding his noble garments, and disguises himself by, “My face I’ll grime with filth,/ Blanket my loins, elf all my hair in knots,/ And with presented nakedness outface…” Now Edgar is nobody, and there is nobody looking for nobody. Edgar, wanting revenge on his bother, must take the status of somebody, so he becomes a lunatic. Still needing protection, but also needing to be somebody, Edgar chooses a person near nobody. The person he chooses is given in the line, ” Poor Turlygod! poor Tom!/ That’s something yet! Edgar I nothing am.” Edgar becomes Tom of Bedlam, an insane lunatic. Now that Edgar is somebody, he can once again mingle with the other characters in the play. His first meeting with another character as Tom, is Lear, who is reaching madness himself. By both Lear and Edgar being naked at the same time allows Edgar to comfort the maddening Lear. The next entrance of Edgar is with his father, Gloucester, who gives him better clothes to wear. Here is where Edgar changes clothes and becomes of higher status, he is now a beggar. The last rise in status for Edgar is his answer to the herald’s call for someone to challenge Edmund. Here Edgar enters dressed and in armor, only those of semi-important status have armor. Edgar knows that with his clothing come his noble rights for when asked who he is, he answers, “Yet am I noble as the adversary…” Claiming that he is of the same noble status as Edmund. Nakedness and dress in Shakespeare’s King Lear, represents the social status of a character. Numerous scenes use the apparel of the characters to claim dominance over another. The more luxurious the clothing, the higher one is in the social status. Two characters change both clothing and status simultaneously. Lear and Edgar, both start the beginning of the play wearing very elegant clothing, but each at different times wear disgracing clothing or even no clothing at all. King Lear demonstrates the theme, “clothes make the man.” 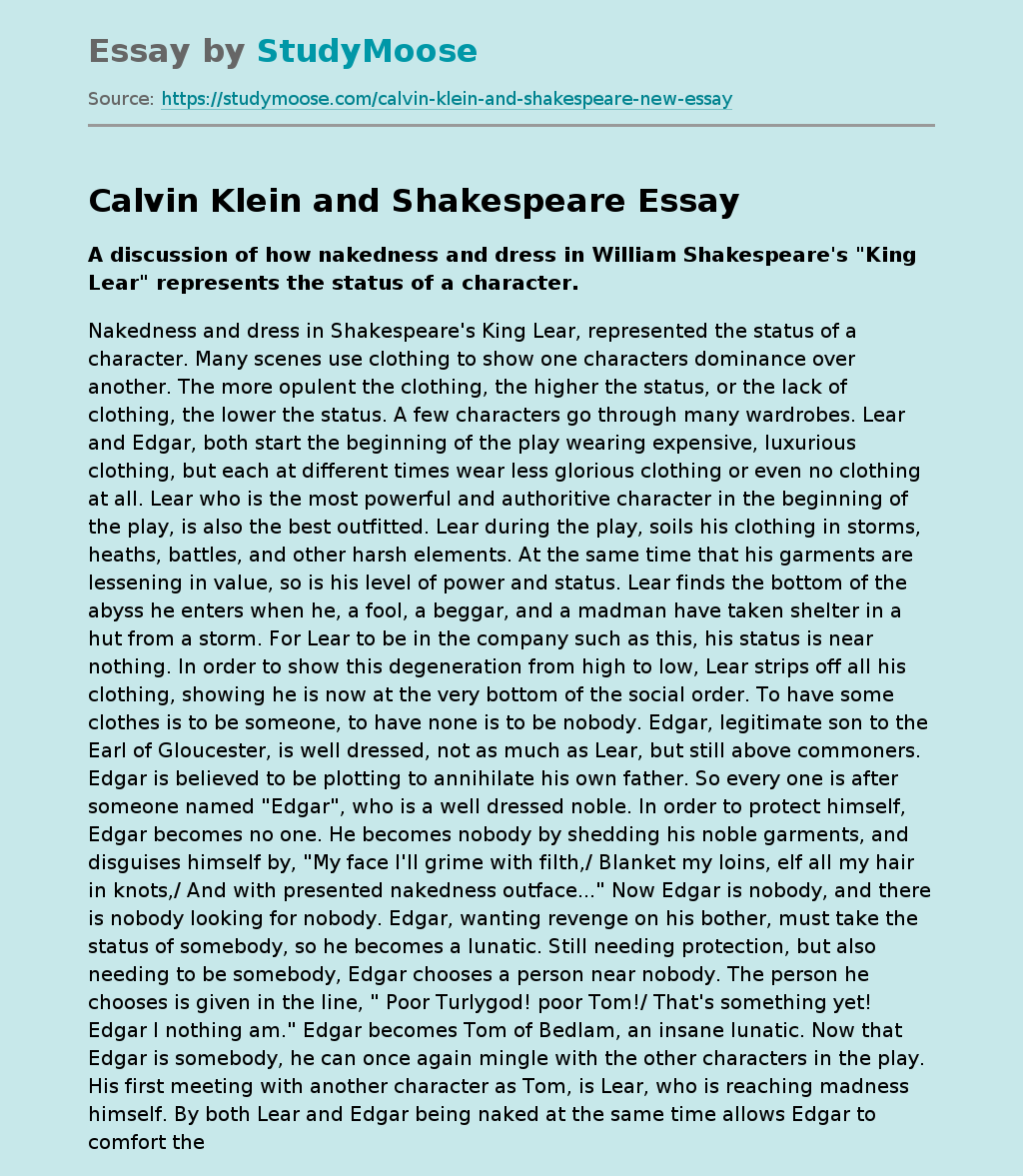